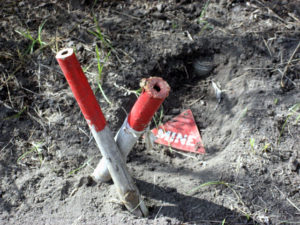 The Japanese government has contributed $906,000 for the mine action project ‘Humanitarian Mine Action in Support of Conflict Affected Communities in South Sudan.’

Over the past five years, Japan has contribution over $13 million to mine action operations in South Sudan.

Last year alone, Japanese-funded teams cleared a total of 1,799,211 sqm, and closed 450 spot tasks including emergency operations by UNMAS Quick Response Teams to survey and clear civilian locations in Juba in the immediate aftermath of conflict in July 2016.

An estimated 7.5 million people have been directly affected by the conflict in South Sudan since it began in December 2013.

Over the past year, the affected population has grown by more than one million.

On July 8, 2016, the optimism for peace and socioeconomic development resulting from the Agreement on the Resolution of the Conflict in South Sudan was interrupted by an outbreak of conflict in Juba and several locations in South Sudan.

The use of explosive weapons such as rockets, grenades, and mortars has further increased the proliferation of explosive hazards with accident levels in 2015 and 2016 being the highest in the last five years.

It is clear that the explosive legacy of war will continue to inhibit social and economic recovery long after the guns have been silenced.

Continued funding from the people of Japan will support a Multi-task Team (MTT) to reduce the impact of explosive hazards, through survey and clearance as well as the provision of Risk Education, for conflict affected communities in Greater Equatoria.

In South Sudan, where 92,840,000 sqm of contamination is known and hundreds of new hazards discovered every month, Mine Action is a critical enabler of humanitarian aid and a key driver of socio-economic development.

The Ambassador of Japan to South Sudan, Mr Kiya Masahiko stated, “We feel a sense of mission as a peace-loving nation to support mine action in South Sudan as it lays the ground work for the people of this country to cancel out the negative past and to collectively embark on humanitarian and development efforts. Ahead of the International Mine Awareness Day, I wish to answer the global call for mine action with a USD 0.9 million contribution and to invite others to this indispensable mine action led by our long-standing partner, UNMAS.”

Mr Tim Lardner, UNMAS South Sudan Programme Manager, emphasized the importance of the support from Japan. “Japan has been a reliable and encouraging partner in mine action to South Sudan and to UNMAS.

“They have always worked closely with us to support the goals of risk reduction to the population through the clearance of explosive remnants of war, but also maintain an important role in working closely with the government of South Sudan, through the National Mine Action Authority. It is great to have such a steady and reliable partner.”