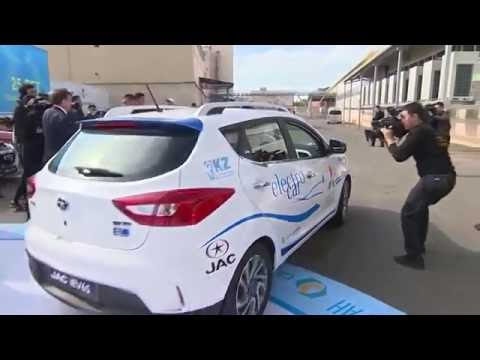 Leading Chinese automaker, JAC Motors, has showcased three of its models at the Expo 2017 in Astana, Kazakhstani.

The models exhibited at the event alongside its distributor in the country are the S3, the iEV6S and the iEV5.

As an important nation along the corridor, Kazakhstan connects China with Central Europe via ‘the Belt and Road’ economic zone.

The country covers a large region of Central Asia and Eastern Europe and is one of JAC’s most valuable markets.

As per the agreement, Allur Group, a Kazakhstan automotive company, will be responsible for the assembly of all JAC cars.

By signing this agreement, JAC is expected to meet the demands in Russia and neighbouring countries and regions and ultimately reach an annual production of 50,000 units.

Following the successful signing of the agreement, on November 3, 2016, the premiers of both China and Kazakhstan witnessed the start of another exciting production cooperation project between the two countries via remote video connection at the JAC plant in Kazakhstan.

This established JAC as a shining example of a successful independent Chinese automobile company along ‘the Belt and Road’ economic zone.

Utilizing the development opportunities of this initiative, JAC has exported products to more than half of the 60 participating countries.

Thanks in part to their strong investment in R&D, JAC has won the favour of Kazakhstani customers with sales increase of over 500 percent in 2016, winning number one market share among all Chinese brands in the country.

To date, JAC has formed two joint ventures including Vietnam and established 9 KD assembly plants along the Silk Road Economic Belt, including in Iran and Kazakhstan, for the assembly of JAC light-duty trucks and passenger vehicles.

As an active participant in ‘the Belt and Road’ initiative, JAC will continue to provide transportation solutions for customers throughout the Silk Road Economic Belt, helping to establish a reputation of quality Chinese production.