President Muhammadu Buhari has been urged to immediately sack Minister of Finance, Mrs Kemi Adeosun, for allegedly meddling in the forensic audit of Oando Plc.

South-South Coordinator of the Oando Shareholders Solidarity Group (OSSG), Mr Clement Ebitimi, made this plea in a statement issued on Monday in Port Harcourt, Rivers State.

The shareholders of Oando claimed that the alleged interference of the Minister in the audit of the oil firm was a bug stain on the anti-corruption campaign of Mr President, whose integrity could be marred by this action.

Last week, Director General of the Securities and Exchange Commission (SEC), Mr Mounir Gwarzo, was suspended by the Minister.

In the statement on Monday, shareholders of Oando alleged that Mrs Adeosun has “lost the moral authority” to remain in President Buhari’s cabinet considering “her repugnant role in shielding the embattled management of Oando Plc from forensic audit in the face of the monumental abuse in the company”.

Mr Ebitimi, who led a group of shareholders to protest at Oando’s Annual General Meeting in Uyo, Akwa Ibom State in September, said, “We condemn in strongest terms the recent suspension of the Director-General of the Securities and Exchange Commission (SEC), Dr Mounir Gwarzo, by the Minister of Finance, Mrs Kemi Adeosun.

“Facts in the public space have revealed that Mrs Kemi Adeosun acted in her capacity as a federal minister to stall the impending forensic audit into Oando Nigeria Plc.

“This is a gross abuse of power and an embarrassment to our corporate existence as a nation. It is shameful, totally embarrassing and should be condemned by all well-meaning Nigerians.

“Dr Munir Gwarzo has demonstrated exemplary leadership as the Director-General of the Securities and Exchange Commission. He is a trusted helmsman that has earned the respect of stakeholders in the Nigerian capital market operations.

“Unlike the Minister of Finance who has brazenly abused her powers for personal gains, Dr Gwarzo has used his office to protect the interest of shareholders in the country’s capital market thereby boosting investment in the market.

“We consider the suspension as an abuse of public office, completely unexpected and unacceptable of a government official. There is nothing more definitive and exemplifying of corruption than the action by the Minister. She has personally and singly rendered the anti-corruption mantle of this government rudderless by this singular action. She is not fit to remain a part of the Buhari administration and no longer fit to be entrusted with any public assignment. The Minister has failed to act honourably on this matter and consequently made it difficult to bestow honour on her.”

The activist said Oando shareholders are deeply concerned about the plight of the company and strongly believe the only solution is for the intervention of the regulatory authorities as demonstrated by SEC under Gwarzo.

According to him, “The management of Oando has for so long relegated shareholders to nonentities; we no longer have a say in the company we invested in. The management has been mismanaging the company while they continue to buy the conscience of some powerful people to support the sustained mission of wrecking the company.

“As of today, every conscientious shareholder of Oando Nigeria Plc is angry. They are angry because of the way the company is being managed. We have held protests across the country starting with the Annual General Meeting dubiously held in Uyo; we have written petitions to the National Assembly and called on well-meaning Nigerians to intervene in the well-orchestrated mission to destroy shareholders’ value in Oando.

“Just when the Securities and Exchange Commission (SEC) intervened and sought to finally unravel the extent of the financial mismanagement and corporate governance abuse, Mrs Kemi Adeosun has thrown herself on the way as a stumbling block.

“Our questions to the Minister are: 1. What is your stake in Oando Nigeria Plc? 2. What is your relationship with Wale Tinubu? 3. How much are you being paid for this job and how much have you been promised? We need answers to these questions to clearly understand why the Minister would choose to provide the umbrella for corruption while Dr Gwarzo is bent on throwing light on the darkness that has engulfed Oando Nigeria Plc.

“In fact, they have continued to increase remuneration of the board while shareholders are left to suffer. Whereas other oil companies are making progress and declaring profit, Oando Nigeria Plc has continued to dwindle, racing towards liquidation with no break in sight.

“Rather than join hands with SEC to save shareholders and rescue the company, Mrs Kemi Adeosun is bent on killing Oando Nigeria Plc by retaining the current incompetent management who lack depth and thoroughness in managing a company. What we need is the forensic audit of Oando to go on. And we clearly understand that the suspension of Dr. Gwarzo is to pave the way FOR another helmsman who will either suspend the forensic audit or ensure that the company only pays fine for the weighty allegations before it.

“This is a clear distraction aimed at suppressing the main issue, which is that Oando as a company cannot survive as a going concern because of the gross abuse of trust, and corporate governance abuse of the Tinubu-led management.

“In the 2016 annual report of the company, the auditors Ernst & Young stated: “We are drawing attention to note 45 in the financial statements, which indicates that the company reported a comprehensive loss for the year of N33.9 billion (2015: loss N56.6 billion) and as at that date, it’s current assets exceeded current liabilities by N14.6 billion (2015: N32.8 billion net current liability).

“As stated in the notes, these conditions, along with other matters, indicate that a material uncertainty exist that may cast significant doubt on the company (and Group’s) ability to continue as a going concern. This is a major disturbing issue that must be addressed by relevant authorities and every concerned stakeholder.

“We all know that the only way to rescue Oando Nigeria Plc at this point in time is for the Wale Tinubu led management to resign and allow an unhindered forensic audit. We are well aware that there will be more discoveries at the end of the forensic audit. This needs to be done to sanitise our capital market and protect investors. To do otherwise is to show to the whole world that our capital market is populated by companies that have integrity questions. We should not allow the misdeeds of the people at Oando Nigerian Plc to become the image of our capital market. Our nation must purge itself of every untrustworthy individual and their abettors. We want the management of Oando Nigeria Plc to resign and we call on the Minister of Finance, Kemi Adeosun to resign her position for gross abuse of public office or be sacked by President Buhari who is not known to condone corrupt practices and abuse of public trust as brazenly exhibited by Adeosun.” 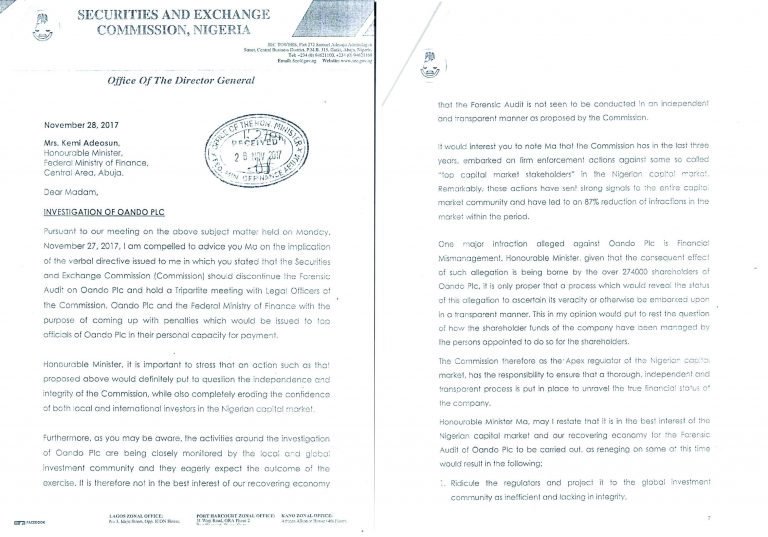 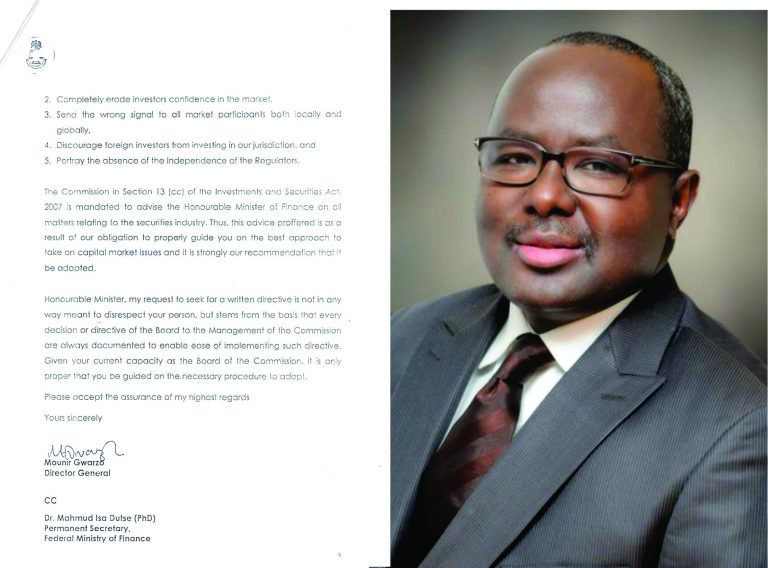