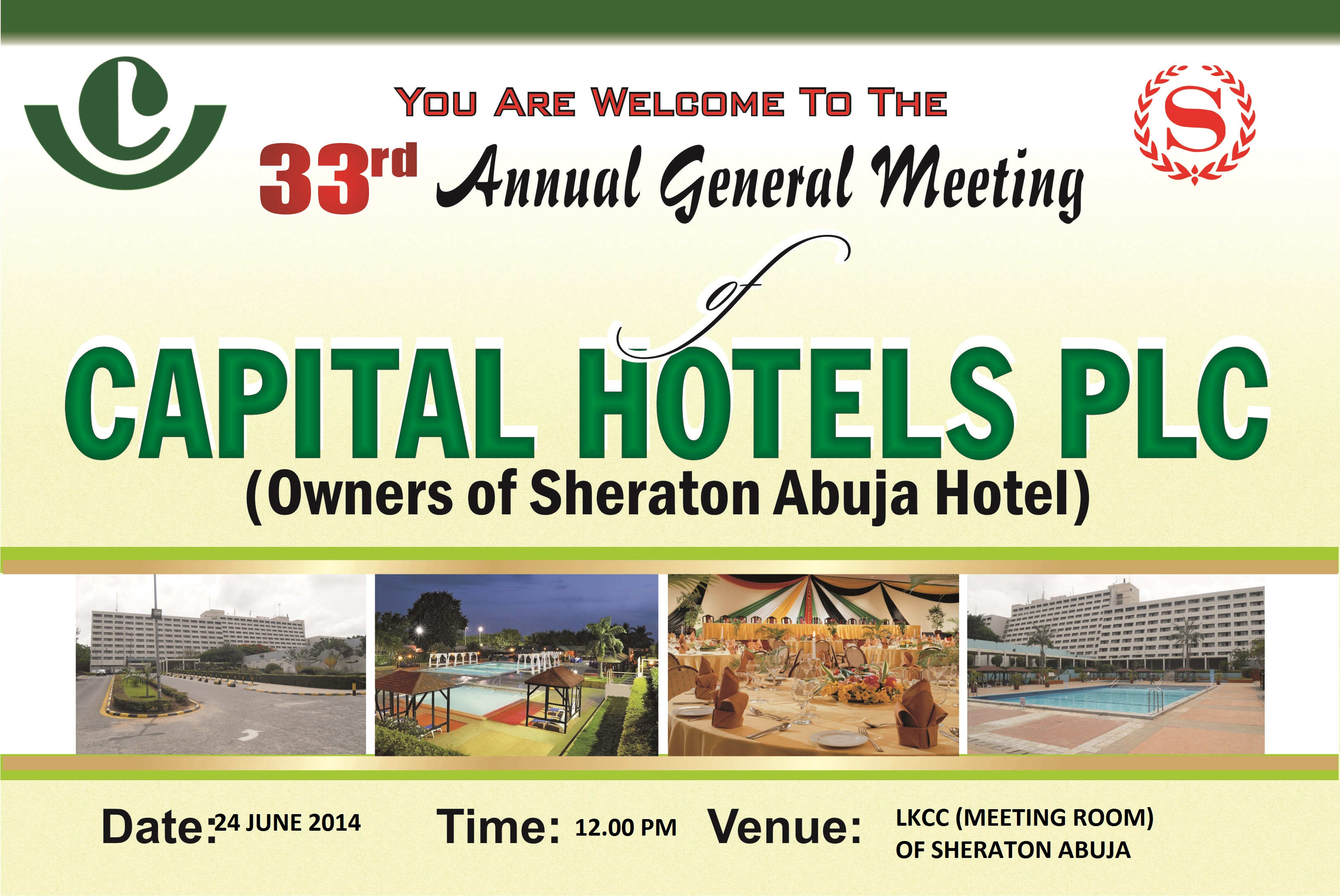 Three non-Executives Directors of Capital Hotels Plc have resigned from the company effective from Friday, June 30, 2017.

A statement issued by the firm on Wednesday, July 12, 2017 gave the names of the affected directors as Mr Victor Oyolu, Engr Yakubu Disu, and Mr Eddie Chukwura.

Mr Anthony Idigbe was elected a Non-Executive Director of Capital Hotels Plc, owners of Sheraton Abuja Hotel, with effect from June 30, 2017 and subsequently elected Chairman of the Board on July 7, 2017.

A seasoned legal practitioner with over 30 years’ experience, Chief Anthony Idigbe is the Senior Partner at Punuka Attorneys & Solicitors, a fully integrated and multi-dimensional business law practice with offices in Lagos, Abuja and Asaba and member of Lawyers Associated Worldwide (LAW), a global association of over 95 independent law firms located in more than 50 countries  around the world.

Mr Abatcha Bulama was elected a Non-Executive Director of Capital Hotels Plc with effect from June 30, 2017.

He is also the Ag Executive Commissioner, Operation and Director, Finance and Accounts of the Securities and Exchange Commission (SEC), Abuja.

Mrs Fadeke Alamutu was elected a Non-Executive Director of Capital Hotels Plc with effect from June 30, 2017.

Mrs Fadeke Alamutu is an experienced business executive with over two decades of work experience.

She currently heads the Investment & Portfolio Management unit of Honeywell Group Limited where she has oversight for the professional management of the multi-million dollar Assets & Equity Investment Portfolio.

Dr Alexander Thomopulos was elected a Non-Executive Director of Capital Hotels Plc with effect from June 30, 2017.

Mr Akpofure Ibru was elected a Non-Executive Director of Capital Hotels Plc with effect from June 30, 2017.

Mr Akpofure Ibru holds an LL.B from Edo State University 1994, and was admitted to the Nigerian Bar in 1995.

His extensive experience in commercial negotiations, company promotional and project implementation spans nearly two decades.  He has served in various management capacities in Ikeja Hotel Plc Group. He also serves as a non-executive director on the boards of several Nigerian companies.  A keen Rotarian, he can often be found donating his time, skill and experience to the less fortunate in society.

Mr Toke Alex-Ibru was elected a Non-Executive Director of Capital Hotels Plc with effect from June 30, 2017.

A History graduate from the University of Exeter in 2002, Mr Toke Alex-Ibru specialised in Media Development in Nigeria with over 10 years of commercial experience in publishing, 3 years in hospitality management and determined to forge a career in the media, hospitality and entertainment in Nigeria.

He is motivated and energetic with diverse work experience gained across a number of fields. He is also a Director of several companies including Oma Investment Ltd., Alurum Investment Ltd., RFC Limited, Dadifoll Limited and an Executive Director of the Guardian Newspaper Ltd.

Related Topics:Capital Hotels Plc
Up Next

Crude Oil Prices Up on Positive US, Chinese Data

Crude oil prices rose more than 1 per cent on Thursday on expectations that global demand will strengthen following signals from the world’s top two economies: the United States and China.

The US economy grew faster than expected in the fourth quarter, but a measure of domestic demand rose at its slowest pace in 2½ years, reflecting higher borrowing costs.

The country’s gross domestic product (GDP) increased at a 2.9 per cent annualized rate last quarter. The economy grew at a 3.2 per cent pace in the third quarter.

The Commerce Department’s advance fourth-quarter report on Thursday showed half of the boost to growth came from a sharp rise in inventory held by businesses, some of which is likely unwanted.

Market participants are closely tracking the upcoming JMMC (Joint Ministerial Monitoring Committee) meeting of the Organisation of the Exporting Countries and its allies, OPEC+ and the European Union(EU) embargo on refined products.

Prior to this, the US Energy Information Administration (EIA) reported an oil inventory build of 500,000 barrels for the week to January 20.

That was short of forecasts for a 1 million barrel rise, though the EIA says crude stocks are at their highest since June 2021.

The latest change in inventories compared with two sizeable weekly builds—one of 8.4 million barrels for the second week of January and a 19-million-barrel one for the first week of the month.

At 448.5 million barrels, crude oil inventories in the United States are 3 per cent above the five-year average for this time of year. 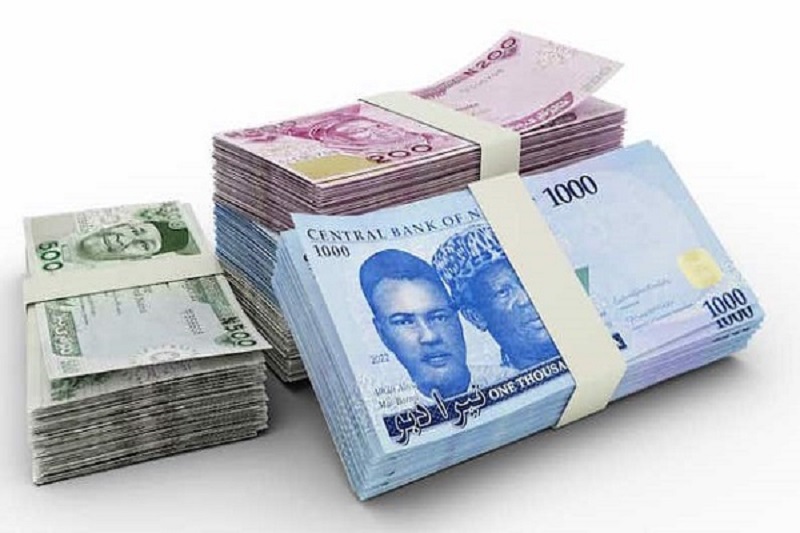 One of the leading e-commerce companies in Nigeria, Jumia, has announced that from Monday, January 30, 2023, it will no longer accept the old Naira notes as a form of payment for goods purchased on the platform.

In a message to its customers on Thursday, the company said this action followed the decision of the Central Bank of Nigeria (CBN) to stop the use of the N200, N500, and N1,000 for financial transactions in Nigeria from February 1, 2023.

On October 26, 2022, the governor of the CBN, Mr Godwin Emefiele, announced that the three denominations would be redesigned. The new banknotes were introduced into circulation on December 15, and Nigerians were asked to return the old notes on or before January 31, 2023.

In order not to miss the deadline, and with the central bank insisting that it would not extend the deadline, Jumia has said its customers have till Sunday to pay for its goods and services with the old notes.

“Should you wish to pay by cash, our delivery associates will only accept the new series of notes.

“Alternatively, you can find details on how to prepay on Jumia using JumiaPay or call us if there are any further questions.

“We will communicate further in case of any change from the federal government or central bank,” the notice from the firm, which was seen by Business Post, stated.

Meanwhile, a few churches in Lagos have asked their members not to pay tithes and offerings with the old banknotes from Sunday, January 29, 2023, due to the CBN directive.

“In reference to CBN’s directive and policy on old Naira notes, we hereby appeal to members not to come to church starting from this Sunday with old Naira notes (200, 500 & 1000).

“You can as well make an online transfer to the designated accounts (check the flier for details).

“Please share this message with members that are not on this platform,” a message from one of the parishes of the Redeemed Christian Church of God (RCCG) said.

Also, checks by this reporter indicated that some POS operators have said they would no longer accept the old notes from their customers from Saturday, January 28, 2023.

“I will not accept cash deposits with the old notes from Saturday because I know the banks will be filled up next week with people who want to deposit their cash.

“This morning, I was at one of the banks to deposit the cash with me, but the crowd there scared me.

“The banks were still giving customers the old notes. I am just confused about the situation. We do not have the new notes. Almost all the ATM terminals in this area are not dispensing cash to customers,” a POS operator in the Egbeda area of Lagos, Mrs Modupe Adediran, told Business Post.

Similarly, a trader at Computer Village, Ikeja, Lagos, Mr Ikenna Okechukwu, informed this reporter that he has stopped accepting the old banknotes from his customers.

However, some commercial bus drivers in Lagos said they will still accept the old banknotes next week.

“I don’t have any issue with the money. I have a strong belief that the central bank will extend the deadline. The announcement will be made next week,” a danfo driver in Ikeja, who identified himself as Mr Tajudeen, said. 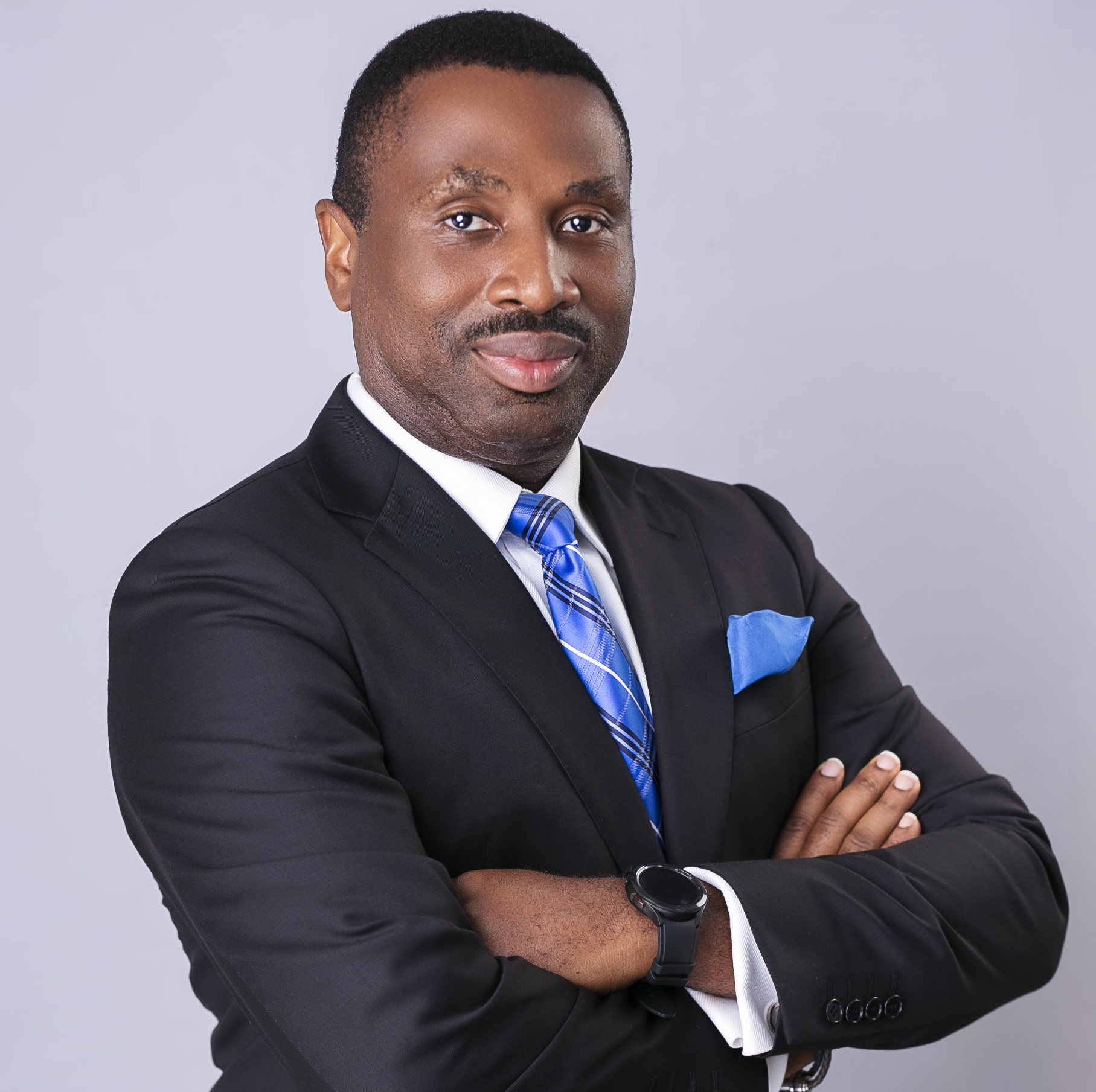 The mutual fund investment app of SFS Capital, the SFS Fund Mobile App, has recorded a 300 per cent uptick in downloads less than one year after it was launched.

The SFS Fund Mobile App has exciting features that have endeared it to new and existing users. The app has an easy-to-use interactive dashboard; it also allows retail investors with N5,000 to start an investment.

In addition, users can make direct transfers from their banks to their virtual accounts and have access to third-party payments to make payments directly into users’ investment accounts.

In the second half of 2022, the SFS Fund Mobile App was launched to enable individuals to begin their investment journey with ease.

“There’s no doubt that investment apps became really popular last year, and we are extremely excited about the growth of the SFS Fund Mobile App and how it is playing a role in encouraging more individuals to start their investment journey with Mutual Fund,” the Managing Director and CEO of SFS Capital, Mr Patrick Ilodianya, said.

Globally, there has been a rise in the usage of retail investment apps. The COVID-19 pandemic induced pragmatic investment decisions by individuals, coupled with increased accessibility to mobile, enabled more individuals to start investing.

The SFS Fund Mobile App is apt for individuals who need a trustworthy, secure and easy platform for high-yield investments in mutual funds.

The app is available for download on Android and iOS. Investments made via the app are managed by seasoned investment experts in the Nigerian financial market who ensure that the returns paid to investors range from 11 per cent to 17 per cent per annum.

The fund has consistently maintained an “AA+” rating which is the 2nd highest possible rating for a mutual fund, and has a highly competitive return on investment and no pre-termination charge.

Investment in mutual funds is a proven recipe for wealth creation, given the opportunities and flexibility it presents to investors.

“This year, we will like to encourage more individuals to make a more decisive move concerning their finances. Investing in mutual funds via the SFS Mobile Fund App makes it possible for individuals to begin to build wealth, especially in an economy like ours that is characterised by downturns and uncertainties,” Mr Ilodianya added.

The SFS Mobile Fund App is part of SFS Capital’s digitisation narrative as the investment management company builds on the legacy it has as a leading Nigerian non-bank financial institution.