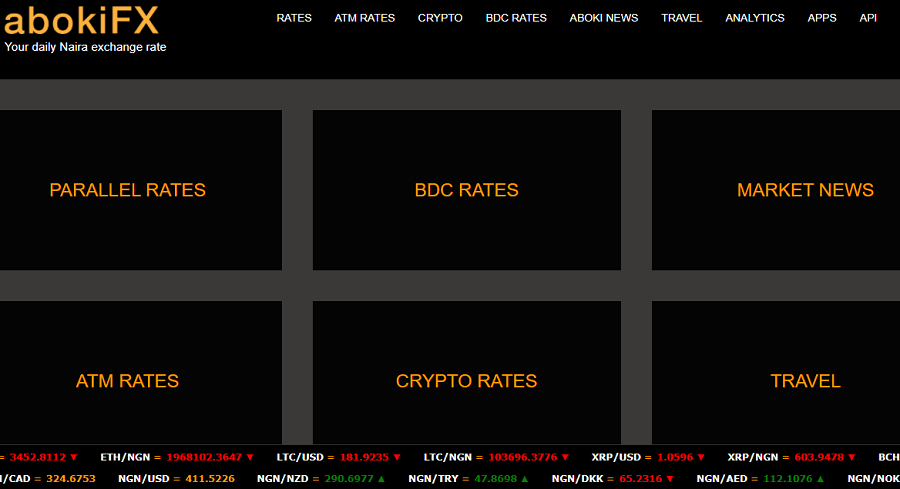 The popular website that tracks the exchange rate of the Naira to the major foreign currencies, AbokiFX, has announced the suspension of its updates pending when it gets a “better clarity” of the allegation of FX manipulations levelled against it by the Central Bank of Nigeria (CBN).

Governor of the CBN, Mr Godwin Emefiele, had insinuated on Friday that the platform was responsible for the recent fall of the local currency at the parallel market.

Mr Emefiele said it had been monitoring activities of the website for the past two years, alleging that its owner, Mr Oniwinde Olusegun Adedotun, was trading forex and manipulating figures to cause panic in the financial system, vowing to ensure he is prosecuted.

But in a statement issued on Friday, the platform said, “We do not trade FX neither (sic) do we have the power to manipulate the rates as we DO NOT CREATE the rates.”

It stressed that, “We ONLY publish what we source on the streets of Lagos, hence the phrase, Lagos Parallel Rates.”

AbokiFX explained that, “The rates sourced are carefully collated, reviewed and a mean rate is published from the data pool. This explains our three daily updates – * Morning, ** Midday, ***Evening.”

“Sometimes, rates come in late but we have to wait for the full set of rates before they are published, to prevent volatility of rates,” it further noted in the statement.

The website said, for now, it will not publish the parallel market rates but will keep updating its news and crypto rates sections until further notice.

“We sincerely hope this suspension will lead to the Naira appreciation from next week,” it stated, adding that, “With our decision to temporarily suspend online rate publication, we are aware that there will be limited visibility of parallel rates information, which will impact decision making for many.”

Below is the unedited statement from the firm;

AbokiFX has taken the decision today, the 17th of September 2021, to temporarily suspend rate updates on all our platforms, until we get better clarity of the situation.

Final rates have been posted this evening but the abokiFX news section and the Crypt° rates section will still be active.

abokiFX was established in 2014 as a research and information service company, to conduct market research and gather data on the parallel market rates.

We also wanted to provide some transparency around the parallel market with the availability of information technology.

abokiFX does NOT TRADE FX, which we have always maintained in our emails and social media platforms.

We do not Trade FX neither do we have the power to manipulate the rates as we DO NOT CREATE the rates.

We are the only entity in Nigeria that has a full set of parallel rates, right from our inception in 2014 when the exchange rate was trading at N166 to Sl.

We collated data for years before we started publishing, as we realised the demand increased for our historical data.

To most users of our platforms, we are just a parallel rates board but to many institutions, ranging frorn IVY league universities, to global businesses and research centres, we area keysource of data, especially, historical data (almost a decade’s worth of data on parallel rates).

Companies use our data for their internal and external audits as well as planning and budgeting.

We ONLY publish what we source on the streets of Lagos, hence the phrase, Lagos Parallel Rates. The rates sourced are carefully collated, reviewed and a mean rate is published from the data pool. This explains our three daily updates – * Morning, ** Midday, ***Evening.

Sometimes, rates come in late but we have to wait for the full set of rates before they are published, to prevent volatility of rates.

None of our data source providers know who we are or what their rates are being used for. This is to avoid any manipulation of rates.

Our staff have a daily routine of going to the market to gather rates, as all the BDCs in the country have their rates clearly displayed on their rates board and parallel market rate dealers give the information away freely.

All we do is collate all that information and display it on all our platforms daily.

In 2017, Nigeria experienced an FX crises and the Naira depreciated to over N500/$1. abokiFX was accused of manipulating the parallel market rates.

Once liquidity was injected, the Naira appreciated and we published the appreciation which is basically what we do.

2021 has seen a similar scenario with the naira depreciating and we have published what we have been given, which has led some to believe we are manipulating the market. Yet no one can complain about our rates deviating +/- 2% from the parallel market rates when they patronise the dealers in the rnarket.

If we do not create the rates, how then can we control the rates. Our only sources of income have been our API and advert sales.

ALLEGATIONS AGAINST OUR DIRECTOR

All allegations against our director are yet to be confirrned but we at abokiFX DO NOT trade FX neither do we manipulate parallel rnarket rates.

Outside the media allegation, we have not received any communication from any government body and our accounts are not closed as stipulated in the media.

abokiFX is fully functional BUT we will not be publishing any form of rates on our platforms for now. We sincerely hope this suspension will lead to the Naira appreciation from next week. With our decision to temporarily suspend online rate publication, we are aware that there will be limited visibility of parallel rates information which will impact decision making for rnany.