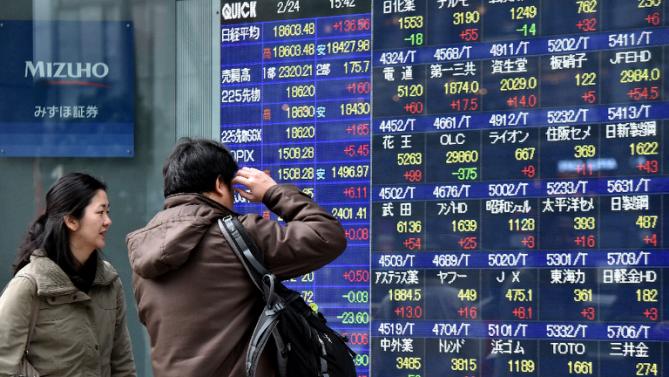 Asian stocks succumbed to selling pressure on Friday as investors adopted a cautious stance ahead of the G7 summit starting in Canada later today as well as upcoming U.S. Federal Reserve, European Central Bank and Bank of Japan policy meetings. The high-profile U.S.-North Korea summit was also on investors’ radar.

Honda Motor declined half a percent on news that the company and General Motors have agreed to jointly develop next-generation batteries for electric vehicles.

In economic news, the Cabinet Office said that Japan’s gross domestic product was down 0.2 percent in the first three months of 2018. That was unchanged from the May 16th preliminary reading, although it defied expectations for an upward revision to -0.1 percent.

Another report from the Ministry of Finance showed that Japan had a current account surplus of 1.845 trillion yen in April, down 6.8 percent year-over-year. The trade surplus was 573.8 billion yen, missing estimates for 746.4 billion yen and down from 1.190 trillion yen in the previous month.

Australian shares ended modestly lower as investors awaited the outcome of central bank meetings. The benchmark S&P/ASX 200 Index dipped 12.10 points or 0.2 percent to 6,045.20, dragged down by industrial and material stocks.

The broader All Ordinaries index ended down 12.60 points or 0.2 percent at 6,156.80. Railroad operator Aurizon Holdings tumbled 4.2 percent to hit a more than two-month low.

A rebound in oil prices helped lift energy stocks, with Woodside Petroleum, Oil Search and Origin Energy finishing up between 0.7 percent and 0.9 percent.