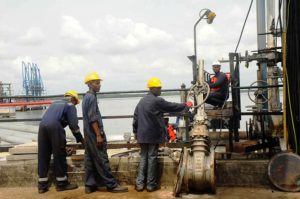 Price of crude oil in the international market has moved up by 26 cents to hit $55.61 per barrel on Wednesday.

This will definitely come as cheering news to the Nigeria government, which has pegged its benchmark at $42.50 per barrel for the 2017 budget.

The price of the commodity has witnessed upward movements since members Organization of the Petroleum Exporting Countries (OPEC) agreed on a cut deal in November 2016 in Vienna.

Nigeria is a member of the oil cabal and had heavily relied on the product for its main source of income until now it thought it wise to diversify.

Activities of militants in the oil rich Niger Delta region has caused reduction in the volume of oil produced per day by the country.

However, Nigeria, which presently produces below 2 million barrel per day, was exempted from the oil cut deal by OPEC.

Since the price of oil dropped in 2015, the West African giant has struggled with its economy, which is presently in recession.

This forced the government to look for other ways of generating income, and agriculture has been the main focus.