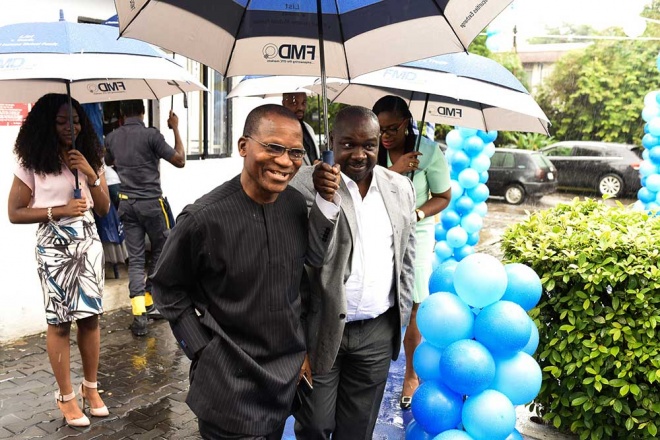 Former Director General of the Debt Management Office (DMO), Mr Abraham Nwankwo, was recently honoured by the FMDQ OTC Securities Exchange (FMDQ) for his success at the agency in a period spanning 10 years.

During his time at the debt office, Mr Nwankwo ensured the DMO released credible data to the public especially when some would have thought he would want to dance to the tunes of the sitting governments.

Following a decade of dedicated service, Mr Nwankwo, whose highly successful tenure as the head of DMO, spanning the period July 2007 to June 2017, was honoured by FMDQ and key financial market stakeholders at a memorable ceremony held at the FMDQ offices in Lagos.

This ceremony, which was in acknowledgement of his efforts towards the growth of the Nigerian bond market, and invariably, the economy, brought together key financial market stakeholders, friends and well-wishers, all wishing to celebrate him on his retirement from the agency.

The rains did not douse the guard of honour-reception the FMDQ staff had planned for Dr Nwankwo. the staff, along with some beautifully erected balloons stands, formed a path on both sides of a blue carpet, for him, his wife and daughter to walk through the entrance, to the humble OTC Exchange building, with FMDQ-branded umbrellas held high by the staff in a spectacle akin to the military pulling out parade! It was indeed a wonderful sight to experience.

From the very eloquently delivered citation to the series of well-articulated and goodwill messages, and even the level of attendance at the Ceremony, it was clear that the positive impact Dr Nwankwo had made in the bond market, and by extension, the economy, over the last decade, was indeed felt and very much appreciated by all. In reliving the decade-long and successful tenure, a one-on-one discourse, anchored by FMDQ’s MD/CEO, Mr Bola Onadele. Koko was held with the outgoing DG, DMO, following which a special symbol depicting Dr Nwankwo’s key achievements, including, the developments which the Nigerian bond market had experienced over the last decade, was presented to and unveiled by the guest of honour, among other mementos.

Described as a “pacesetter” in the goodwill messages which flocked in, Dr Nwankwo set out to redefine the public debt management landscape in Nigeria, bringing on commendable verve and innovativeness to the hitherto conservative area of public finance management. From the development of a comprehensive and accurate national debt database to deepening the domestic bond market via the introduction of regular monthly bond issuances supported with the PDMMs System and the consistent launch of innovative bond products including the Federal Government of Nigeria (FGN) Savings Bond, Sukuk, and the soon to be finalised FGN Dollar and Green Bonds, the DMO, under Dr Nwankwo’s leadership, progressively pursued the alignment of the Nigerian debt capital markets (DCM) to international standards. In recording landmark achievements, including the first-ever domestic listing of the Federal Government of Nigeria Eurobond, the agency is seen to have set an audacious pace towards effectively developing the domestic bond market.

Dr Nwankwo’s quest for excellence, his consistency, integrity, professionalism and humility, were a few of the words and phrases used to describe the outgoing DG and were attributed to his exceptional performance during his 10-year tenure, under four different administrations.

In consolidation of the strategic and value-adding initiatives undertaken by the DMO in developing the Nigerian DCM, FMDQ, with a deep sense of appreciation as Dr Nwankwo retires, continues to show great commitment to actualising the objectives of the agency vis-a’vis those of the OTC Exchange for the transformation of the markets within its purview. FMDQ looks forward, in excited anticipation, to maintaining this formidable collaboration with the DMO under the new leadership of Ms Oniha, towards the further development of the Nigerian DCM, and by extension, the economy.

By serving as a point of integration between the domestic and international markets, FMDQ has, in its short period of existence, become the ambassador of foreign portfolio capital for Nigeria and lent itself as an efficient and operationally excellent platform for fixed income and currency.

This is well in line with its mission to empower the financial markets to be innovative and credible, in support of the Nigerian economy. In promoting and supporting economic development therefore, the active collaboration of all stakeholders is required to erect the necessary market infrastructures, transform and position the Nigerian financial markets towards maximising its potential, and its partnership with the DMO remains a steady and right path towards actualising the shared objectives and desires of the markets.