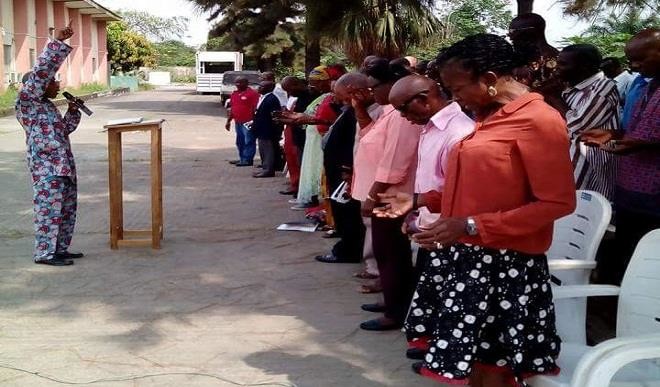 Daily Independent newspaper has unearthed the real reasons former workers of the defunct Nigerian Airways are yet to receive the severance package despite President Muhammadu giving the approval for the payment.

It was gathered that the conflict between the Office of the Accountant General of the Federation (OAGF) and the Presidential Initiative on Continuous Audit (PICA), a department under the Ministry of Finance, is stalling final payment of severance benefit to ex-workers of the defunct national carrier, Nigeria Airways.

Independent learnt that the conflict between the two government bodies is as a result of who gets the administrative charge from the severance package of the ex-workers.

The inter-ministerial committee raised by the government verified the status of ex-workers of Nigeria Airways and came up with N78 billion benefit for the former staff of the airline.  The committee recommended one percent administrative charge of the total sum to be given to any government agency that disburses the money to the ex-workers. This amounted to N735 million.

In its recommendation, the inter-ministerial committee also said that the OAGF should disburse the N78 billion to all the beneficiaries.

However, PICA in its own recommendation to President Muhammadu Buhari reduced the total benefit to N43 billion, but increased the administrative charge to N2.1 billion without recourse to any percentage as recommended by the inter-ministerial committee.

A reliable source told Independent that PICA, which was set up by President Buhari in 2015, few months after coming into office to carry out final verification of any payment by the Federal Government suddenly became interested in payment of the severance package to the former workers of the airline because of the administrative charge involved.

The document revealed that the inter-ministerial committee had recommended the sum of N78 billion as the total severance package for 10 years for the workers, including pension arrears for the period after the physical verification of about 6,000 beneficiaries.

PICA in its recommendation to the government slashed the sum to just N43 billion, and expunged the 10 years pension arrears as agreed with the former workers and their unions by the inter-ministerial committee.

However, sources said the reduction of a massive N35 billion from the recommended and approved N78 billion by the inter-ministerial committee did not go down well with the Minister of State for Aviation, Hadi Sirika, who insisted that the earlier approved sum must be paid.

A source close to the committee confided in our correspondent that the Federal Government was ready to pay the total sum to the ex-workers who have lost at least 700 of their members since the airline was liquidated in 2013 to avoidable deaths, but PICA is a stumbling block to that payment, which has further put the government in a dilemma.

The source wondered how PICA arrived at the N2.1 billion administrative charge after reducing the total sum to be paid to the ex-workers to N43 billion which represented 45 percent reduction.

“PICA is the only body that is standing between the payment of the final severance package to us and the government. President Buhari has agreed to pay the total sum to us until everything was taken to PICA for final verification.

“PICA without following due process, suddenly reduced our total benefit to just N43 billion, but ironically increased its own administrative charge to N2.1 billion, which is a difference of N1.3 billion. And the government thinks they can come up with a national carrier without first settling us, I think that will be practically impossible.

“Several bodies are ready to take the government to court even outside the country. I can assure you that anywhere their aircraft flies to such an aircraft would be impounded until all debts are settled. We are talking of ex-workers in Europe and several other African countries. Some of them are already in court to ensure their payments. PICA is not helping matters and may make the case worse for impending investors.”

It would be recalled that apart from the Nigerian staff of the airline who are owed pension arrears, outstations like those in Rome, Saudi Arabia, Benin Republic, Cameroon, Dubai and all the French speaking countries in Africa are also yet to benefit from the severance package.

Only staff of the airline in United Kingdom and United States were paid their entitlement of 25 years severance package in full.

The total sum of N29.1 billion, which represented five years severance package was paid to the former workers of the airline by the late Yar’Adua in 2009 after years of agitation by the ex-workers.