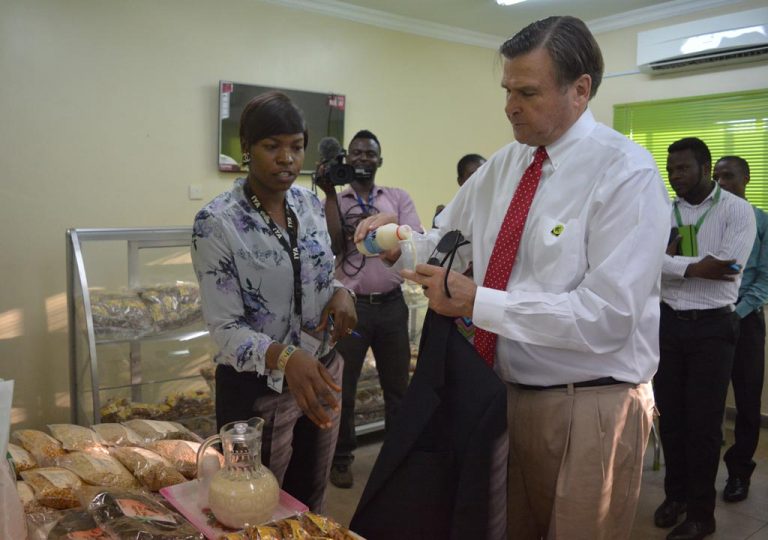 The need for the Federal Government and other tiers of government in Nigeria to support innovations in the agricultural sector has been emphasised by a diplomat.

US Ambassador to Nigeria, Mr Stuart Symington, during a visit to the International Institute of Tropical Agriculture (IITA) in Ibadan, Oyo State, said this was important so as to enhance the economy.

Mr Symington, who was at the facility precisely on Monday, June 19, 2017, said supporting innovations in the sector was key to more yields by farmers.

He emphasised that government must specifically support innovations that will change the narrative of the agricultural sector.

“It is not for government to help but for government not to be in the way. I want you to think of how you can approach a farmer who makes $40 in a year and convince him that he can triple the amount in a year.

“I know you can do this because you have the training, skills, experience of doing things differently by using the right technology, seeds, and practices,” Mr Symington said.

The envoy also advised the youths to be innovative and develop ideas that will enable Africa to feed itself.

During his visit, Director General of the IITA, Mr Nteranya Sanginga, took his guest round the research institute, where the Ambassador looked at an array of finished products produced by IYA and also got to taste their soymilk.

On his part, Mr Sanginga elaborated on the relevance, production, and distribution procedures of Aflasafe—IITA’s flagship bio-control product for aflatoxin management.

Modest Weakness May be Visible in Early Trading on Wall Street