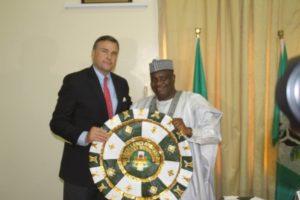 The United States said it will support Sokoto government’s efforts to modernise agricultural processes and implements so as to enhance productivity and ensure food security.

US Ambassador to Nigeria, Mr Stuart Symington, gave the assurance when he paid a courtesy visit to Governor Aminu Waziri Tambuwal at the Sokoto Government House.

He said policies put in place so far to improve the sector by the Sokoto government are encouraging and deserve support.

The envoy said he was in Sokoto as part of his familiarisation visits to various parts of Nigeria.

According to him, he has been impressed by the commitment shown by Nigerians in efforts to move their country forward, and expressed optimism that the potential of the country will soon be realised.

“In my 115 days in Nigeria so far, I have learned how millions of people have come together with a common goal to achieve peace and prosperity despite numerous challenges confronting the country.

“The USA will continue to partner with Nigeria and your state in the areas of health, education, job creation, agriculture and other key areas of development,” he stated.

In his remarks, Mr Tambuwal said Sokoto has introduced key policies and legislation aimed at impacting positively on the lives of the people.

“Sectors like healthcare delivery, agriculture, education, women and youth empowerment have been strengthened for the long term benefit of the citizens. We will continue to seek your support in those areas and more,” he added.

Mr Tambuwal commended the US for its management of social diversity, saying Nigeria and other countries can learn from the USA in that regard.

“USA’s strength can be found in how the country applies wisdom in managing its diversity,” the Governor said.

Mr Tambuwal, who described the recent visit to Sokoto, of former US Secretary of State, John Kerry, as a great honour to the people of the Caliphate, said the state will continue to cherish the special relationship between the two entities.

While calling on the Ambassador, who was redeployed from Niger Republic, to apply his experience to strengthen Nigeria-US ties, Mr Tambuwal acknowledged the various humanitarian intervention programmes implemented in the state by the US Agency for International Development (USAID).

Related Topics:sokoto agric modernisation
Up Next