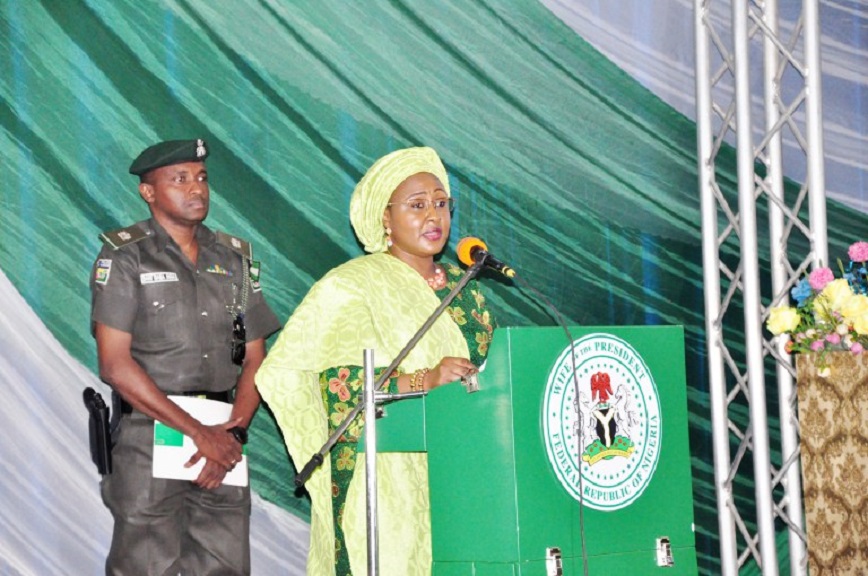 A scandal is brewing within the household of President Muhammadu Buhari.

His wife, Aisha, has caused the arrest of her own Aide De Camp, after accusing him of defrauding her, those familiar with the matter have told PREMIUM TIMES.

The president’s wife is alleging that Sani Baba-Inna, a chief superintendent of police, received huge donations from politicians and business people on her behalf and then kept the cash to himself.

Mrs Buhari therefore requested the Inspector General of Police, Ibrahim Idris, to arrest and compel Mr. Baba-Inna to refund the money, put at over N2.5billion.

The police officer was arrested Friday and has remained in detention ever since, with relatives having no access to him, family members say.

It is unclear how the president’s wife came about the allegation, but one source said another aide working for Mrs Buhari originated the claim.

An associate of the embattled police officer said Mr. Baba-Inna strongly denied the allegation, saying he received no donation from anyone on behalf of his boss.

Immediately the police received the petition from Mrs Buhari, the ADC was arrested on Friday last week and investigation launched.

“The IG said the matter must be investigated immediately and the house of the ADC was raided,” one of our sources said.

“Shockingly, investigators only found N1,200 cash in the House. His bank account was also investigated and had only a balance of N30,000 while the transaction records showed that most credits to the account were his salaries and allowances.”

The police, it was gathered, concluded that Mrs Buhari must have been wrongly informed as there was nothing to show or prove that such huge sums of money was in the custody of Mr Baba-Inna.

An associate of Mr. Baba-Inna said the police contacted those named as donors of the controversial funds but that they all denied making the donations attributed to them.

“For instance, one of those named was the IG of Police himself,” the source said. “But the IG said he has never passed any money through Baba-Inna.”

When Mrs Buhari was informed of the outcome of police investigation, the source said the first lady flared up and accused the police of colluding “to protect one of their own”.

She then reportedly asked the State Security Service (SSS) to take over the case and get her money back”.

On the orders of the wife of the president, SSS operatives reportedly took custody of Mr Baba Inna.

However, the spokesperson for the SSS, Peter Afunanya told PREMIUM TIMES he was not aware of Mr Baba-Inna’s arrest by his agency.

“You are just telling me now, I am not aware, but if there is anything like that I will get back to you,” he said.

In the same vein, the spokesperson of the police, Jimoh Moshood, said “I am not aware.”

But Hassana, the wife of Mr Baba-Inna confirmed her husband’s arrest.

She also said she “has not been able to speak with him since he was taken away”.

When contacted, the spokesperson of the wife of the president, Suleiman Haruna, said although he heard about the matter, he was trying to get details from Mrs Buhari, who he said is currently travelling in New York.

However, as at the time of posting this story on Business Post, spokesperson of the DSS, Mr Peter Afunanya, kept his words and called Premium Times on Tuesday afternoon to confirm that Mr Baba-Inna was in custody at the headquarters of his agency in Abuja.

“He was handed over by the Police and investigation is ongoing,” he said.

A member of the Baba-Inna family also informed us that the SSS allowed Hassana, the wife of the ADC to meet him today.