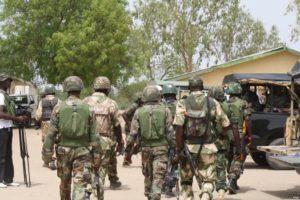 Two suspected suicide bomber were on Sunday morning shot dead by a sniper in Borno State while attempting to detonate explosives at an Internally Displaced Persons (IDP) camp in Maiduguri, the state capital.

The incident occurred at about 9am this morning.

On Saturday, a suicide bomber attacked the same IDP camp, while another attacked an NNPC depot on the same road. Both incidents caused the death of nine persons.

However, Sunday’s attack was foiled by a vigilant sentry, who sighted the bombers and laid in wait until they came closer.

The sniper instantly shot and killed the terrorists as they tried to force his way to the western flank of the IDP camp fence.

Consequently, a combined team of military and police Explosive Ordinance Device (EOD) were called to safely detonate the IED.

Meanwhile, the situation at the camp and the general area is calm, according to Colonel Sani Kukasheka Usman, the Acting Director Army Public Relations.