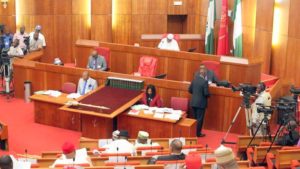 On Thursday, January 12, 2017, President Muhammadu Buhari resent names of 46 non-career ambassadorial nominees to the Senate for consideration and confirmation.

About two months ago, the upper legislative chamber rejected the first list sent to it by Mr Buhari because of some flaws.

It told the President to work on the observations and resend the list back to them.

It is believed that Governors on the platform of the All Progressives Congress (APC) were not happy for being left out of determining who makes the list.

The Governors had met with the President to express their displeasure over this.

But reading the letter sent to red chamber today, the Senate President, Mr Bukola Saraki, informed his colleagues that the President seeks their confirmation of the non-career envoys.

“I wish to refer to your letter of November 16, 2016 on the nomination of non-career ambassadors and to resubmit, hereunder, the revised list of non-career nominees for confirmation as Ambassadors-Designate by the Distinguished Senate,” Mr Buhari stated in his letter on Thursday.