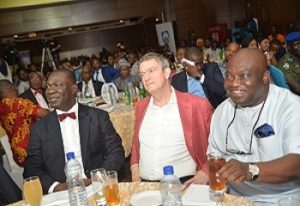 Memories of the Nigerian Breweries Golden Pen Awards, which took place in Lagos at the weekend, will linger on for a long time in the minds of journalists at the occasion.

The awards ceremony was truly theirs as Nigerian Breweries spared nothing to ensure pen-pushers in the country were treated with honour and like kings they truly are.

Gentlemen of the press from across the country and several media houses were present at the event as well as those on the corridors of power in Nigeria, including the Deputy Senate President, Mr Ike Ekweremadu, Governor Okezie Ikpeazu of Abia State, among others.

Entries were received from journalists on Education, Youth Empowerment and Talent Development in 2015.

The award which is the 8th in the series is aimed at promoting professionalism and objective reportage of events in Nigeria. It is also meant to reward such journalists who abide by the fine ethics of the journalism profession.

The night of glitz and glamour saw Tobi Aworinde of The Punch Newspaper emerge as the NB Golden Pen Reporter of the Year. The first runner-up was Gbenga Salau of The Guardian Newspaper, while Charles Abah, also of The Punch emerged as the second runner-up.

All the winning journalists also got cash prizes and high-end mobile devices as part of the reward package.

While welcoming guests at the event, the Managing Director, Nigerian Breweries Plc., Mr Nicolaas Vervelde, disclosed that the award was launched eight years ago to promote professionalism and objectivity of media reports. He explained that the choice of Education, Youth Empowerment and Talent Development as the focus of this year’s edition, like in the last two years, is hinged on the fact that no country can lay claim to development and prosperity without adequate attention to the education and empowerment of the youth.

Deputy Senate President, Mr Ike Ekweremadu, praised Nigerian Breweries for sustaining the award over eight years and saluted the courage of journalists for their contribution to the nation’s development. He appealed to the media to continue to be the watchdog and gatekeeper of the nation’s democracy.

Mr John Momoh, Chairman/CEO, Channels Television, guest speaker at the event, called for soul-searching by the media and extolled them to bridge the gap between training and practice.

Dr Yemi Ogunbiyi, Managing Director of Tanus Communications and Chairman of the Panel of Judges commended Nigerian Breweries for the initiative and enjoined journalists to aspire to the highest standards

Mr Kufre Ekanem, Corporate Affairs Adviser, Nigerian Breweries Plc, disclosed that a total of 267 entries were received when submission closed for the award. He explained that the award criteria of quality, professionalism and objectivity remain the filters upon which entries were shortlisted for the award, as decided by the independent judging panel.