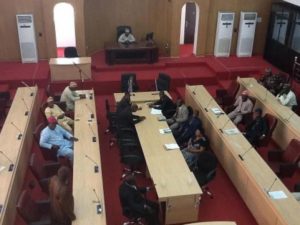 Thirty-eight out of the 39 persons presented to the Osun State House of Assembly by Governor Rauf Aregbesola for the position of Commissioners and Special Advisers in the state have been confirmed.

The nominees were confirmed on Monday after they were screened by the state lawmakers.

One of the nominees Mr Adeola Tejumola, we gathered, was unfortunately not confirmed by the state Assembly because he allegedly failed to appear before the lawmakers for questioning.

Last week, the congressmen screened the nominees, but were confirmed today at a plenary on the floor of the Assembly.

Speaker of the Assembly, Mr Najeem Salaam, charged the Commissioners to work hard to improve fortune of the state.

He wished them success as they serve the state.