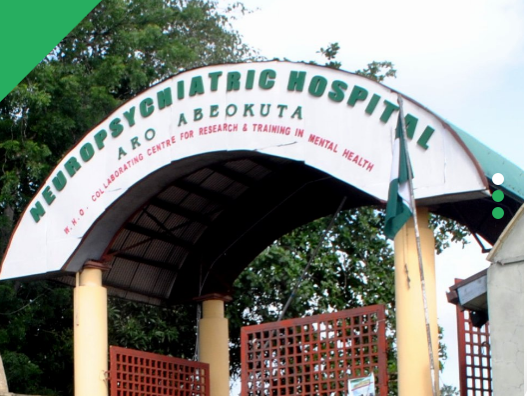 The World Health Organization (WHO) has named the Federal Neuropsychiatric Hospital, Aro, Abeokuta, Ogun State, as one of the two sites conducting the International Classification of Diseases and Related Health Problems (ICD-11) field studies in Nigeria.

Speaking about the programme, the Acting Provost and Medical Director of the foremost psychiatric hospital in Nigeria, Dr Adebowale Timothy, stated that the research capacity of the hospital has received a boost with her involvement in the WHO International classification of Diseases and Related Health problems (ICD-11) field studies.

Speaking further on the development, Dr Lucky Onofa, the WHO Global Mental Health Scholar and the Site Coordinator for Federal Neuropsychiatric Hospital, Aro said that the ICD-11 Field trial is a revision process of ICD-10, a diagnostic tool used globally by Health professionals to diagnose and classify diseases.

According to him, “The primary principle guiding the revision process for ICD-11 is to provide more effective support to countries in reducing the disease burden associated with mental, and Neurological and substance use disorders.”

He said further that the ICD-11 will be a framework for health information and reporting with the aims of monitoring epidemics/threats to public health/disease burden, assessing progress towards meeting public health objectives and also to serve as a basis for guidelines for care and standard of practice.”

“The Ecological implementation (clinic-based) field studies will help guide the revision of the chapter on Mental and Behavioural Diseases of the International Classification of Diseases and Related Health problems, 10th Revision (ICD-10) to be incorporated in the 11th Revision of the classification, ICD-11,” he added.

The Research project, which will be conducted at treatment facilities around the world, will examine the clinical consistency (Inter-rater reliability) and clinical utility (goodness of fit, ease of use, and adequacy of the diagnostic guidelines of selected categories of mental and behavioural disorders chosen due to their high burden in the community.

Since the establishment of the Federal Neuropsychiatric Hospital, Aro in 1954, the hospital has continued to discharge her tripartite mandate in Clinical Services delivery, Research and Training & Human Capacity Development in mental Health services.

The hospital champions the mental health situation in Nigeria through different initiatives. These initiatives include mental health services at the Primary Health Care (PHC) level across Ogun State in collaboration with Ogun State Local Government Service Commission and mental health training of Primary Health Care workers across the twenty (20) Local Government areas of the state, in and out-patient services, Child and Adolescent mental health services, Addiction psychiatry and other services in the hospital. The innovative Aro Primary Care Mental Health Services, is aimed at reducing treatment gap in the country.

In Nigeria, the mental health situation has remained dismally deplorable with only 1% of the 10-18% of people suffering from mental illness having access to Specialist care. 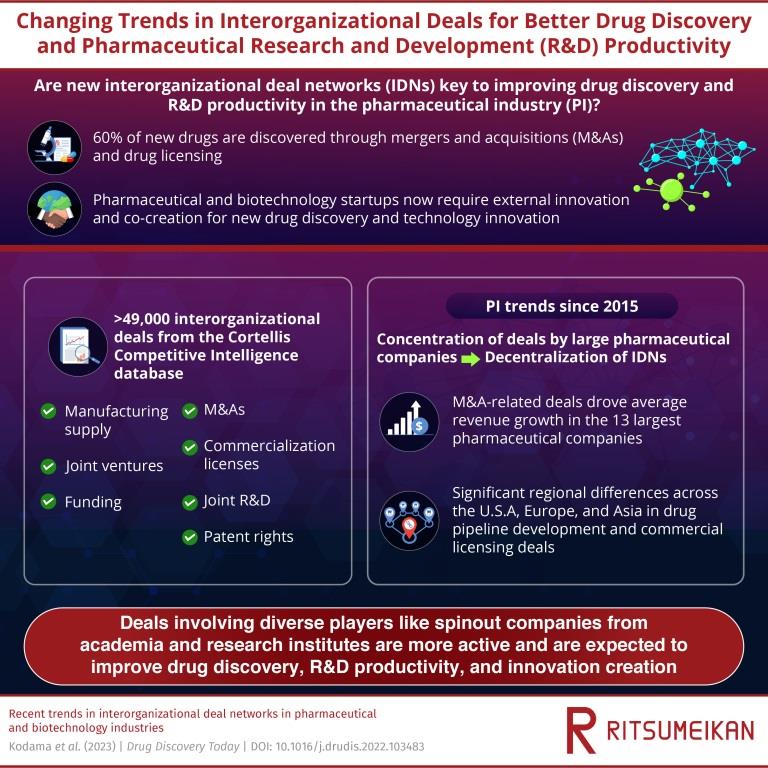 In a recent study published in the journal Drug Discovery Today, a team of scientists at Ritsumeikan University in Japan analysed the changing trends in pharmaceutical industries to spotlight the role of interorganisational collaborations in promoting drug discovery and innovation.

Discovering new drugs has become increasingly rare for independent large pharmaceutical companies in recent times. With numbers showing that almost 60 per cent of new drugs are discovered through mergers and acquisitions and drug licensing.

Now, the university researchers shed light on the recent trends of spinouts from academia and investments in the US and Europe, foreshadowing a promising shift in the industry’s interorganisational deal networks to improve research and development productivity in the future.

“It is a challenging feat to launch a new drug in the market, given the low probability of success during the research and development (R&D) phase and the high costs involved. In recent times, industry trends in external innovation for drug discovery are rapidly changing.  With an improved understanding of disease biology, decision-making can be more streamlined through the effective use of scientific information,” a statement made available to Business Post said.

Led by Associate Professor Kota Kodama of Ritsumeikan University, the team is uncovering how the trends in interorganisational deals in the pharmaceutical industry are changing to improve R&D productivity and drug discovery.

“The network structure of innovation creation in the pharmaceutical industry has changed with the increasing emergence of start-up companies spinning out from academia and research institutions as players in the source of innovation,” explains Dr Kodama, while discussing their investigations into these changing trends and the results of which were made available online on December 27, 2022, and published in volume 28 issue 3 of the journal Drug Discovery Today on March 1, 2023.

Their research suggests that the knowledge necessary for breakthrough innovation in drug discovery is more often than not obtained through alliance networks.

The researchers now aim to define the changes in the network structure and nature of such alliances that have occurred over the past decade to provide future strategic insights for industry and academic players involved in drug discovery.

Using data from the Cortellis Competitive Intelligence database, the researchers identified nearly 50,000 deals of various kinds related to pharmaceutical R&D across pharmaceutical, digital health software, animal drug, and medical device companies to uncover trends in the creation of new drugs for human use.

They also studied the trends of 13 of the largest pharmaceutical companies with annual revenues of more than $10 billion, who saw an improvement in their CAGR (compound annual growth rate) since 2015.

The concentration of business relationships between organizations of certain areas in the network changed to dispersion around 2015, and new networks connecting different groups started to form after 2017.

These trends are an important illustration of how the industry landscape is gradually evolving away from the traditional network in which large pharmaceutical companies drove drug discovery output. Now, interorganisational deals among more diverse players have become active and are driving R&D productivity for startups in biotechnology and pharmaceuticals.

A clear increase in the number of academia-owned spinouts of advanced technology and expansion of investment in start-ups is a positive sign. The emergence of new chemical modalities, such as biologics, oligonucleotides, and peptides that differ from traditional small molecule drug discovery, indicate remarkable changes that have taken place over the past two decades.

The trend of increased financing for start-up companies in personalized drug development is beneficial for patent creation and will positively impact innovation creation in the coming years.

“The presence of academia to support the technologies of these start-ups is becoming very important, and government and private support and investment in this area are boosting innovation. Our study shows that such medium- and long-term support may ultimately benefit the health and well-being of humankind,” Dr Kodama noted. 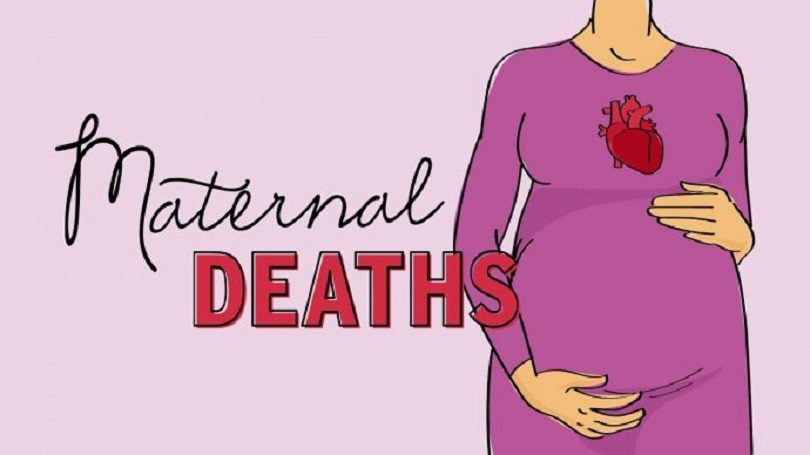 The Paediatric Association of Nigeria (PAN) has said that the nation is losing its medical personnel to better-organised global settings, leaving the remaining healthcare workers in government-owned hospitals to be overstretched.

The National President of PAN, Dr Olufemi Ogunrinde, said at the opening ceremony of the association’s four-day annual general meeting and scientific conference in Akure themed Optimising Child Healthcare In Nigeria Despite Current Socio-Economic Challenges, noting that “available data shows that the country has less than one doctor to 3,000 patients, while there are 1.5 nurses to 1,000 patients.”

Dr Ogunrinde said Nigeria’s maternal mortality ratio is now 814 per 100,000 “and is closely linked to adverse neonatal outcomes with pervasive poverty and the stranglehold of communicable diseases.

“We are almost at the halfway point, at least in terms of time, to the 2030 Agenda for Sustainable Development.

“Despite our abundant quality human and natural resources, we have, as a nation, continued to make slow progress in actualising the Sustainable Development Goals, especially as pertain to our children and the youths.

“This has affected us so much that our country has continued to fare poorly in virtually all indices of health.

“Yes, we have made some gains in the health sector over the past few years, but we have had the unfortunate title of “the poverty capital of the world” bestowed on us. 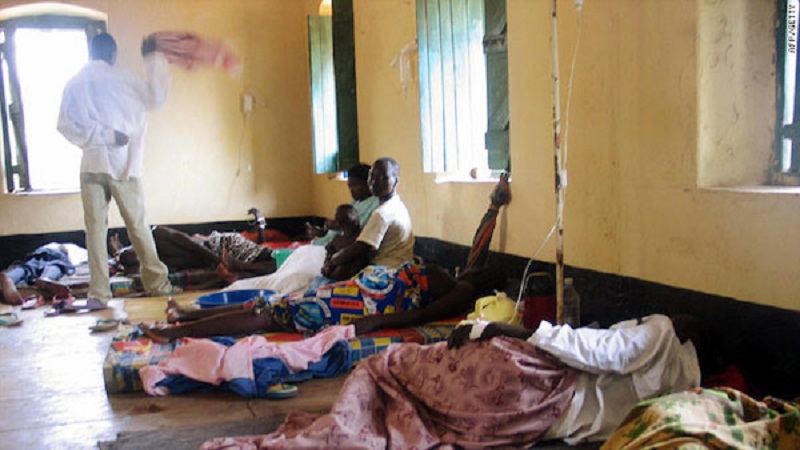 The Borno State government and the World Health Organisation (WHO) have declared an end to a four-month cholera outbreak that killed almost 400 people in the Northeastern Nigerian state.

The State Director of Public Health, Dr Goni Abba, says the announcement follows the successive decline in cases below the emergency threshold and an epidemiological review carried out in collaboration with WHO.

Given the epidemiology of cholera in Nigeria, this does not mean that new cases of the disease would not be detected in the state as the year goes by.

He expressed gratitude to WHO and other partners that collaborated with Borno state in managing the cholera outbreak from when it was confirmed and reported till it was declared over.

“I would like to appreciate WHO technical officers for their leadership and guidance in containing the outbreak. Although the emergency phase is over, I appeal to all health partners to work in synergy to build a sustainable health response that will save lives,” he said.

Furthermore, the WHO Northeast Emergency Manager, Dr Beatrice Muraguri, mentioned that the WHO technical officers had been part of the cholera emergency response since the first cases were reported.

According to her, cholera is one of the fatal endemic diseases ravaging the lives of the most vulnerable people, and the prompt cholera coordination by the Borno state government yielded a viable result.

“The outbreak was declared over after there were no cases reported following weeks of heightened surveillance in the affected LGAs. This provides an opportunity to review lessons learned and strengthen our public health preparedness, detection, surveillance, and response for the upcoming rainy season,” she said.

WHO added that it would continue to work towards the 2030-Global Roadmap for Ending Cholera by providing technical guidance to the state government and preparing preposition kits to avert cholera outbreaks from occurring.

To contain the outbreak, WHO supported Borno State by donating 85 foldable beds for emergency treatments, led the coordination of health partners during the outbreak response, provided life-saving intervention by strengthening the capacity of 516 healthcare workers to improve the surveillance system, raising public awareness through risk communication and community engagement which contributed to early reporting of cases and management across the hotspots LGAs.