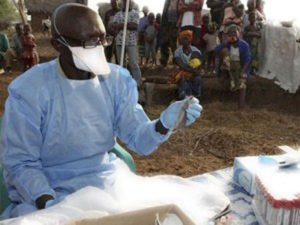 Minister of Health, Professor Isaac Adewole, has confirmed the death of a health practitioner as a result of Lassa Fever in Ogun State.

This is contained in a statement released to the Press by the Press Unit of the Ministry on Wednesday, December 21, 2016.

According to the press release, the Minister has also mandated the National Centre for Disease Control (NCDC) to release a detailed brief as soon as it concludes its investigations.

Professor Adewole further called on members of the public to be calm, and seek care in health care facilities.

“Anybody with symptoms which include fever, headaches, vomiting, should report immediately at the nearest medical facility.

“Healthcare professionals reminded to test before treating for suspected malaria, and if the test is negative for malaria, to maintain a high index of suspicion for Lassa Fever. Lassa Fever is treatable when detected early,” the statement read.

Medical Personnel were directed to report cases of suspected Lassa Fever immediately to the State Epidemiologist, who has been provided with the commodities, by NCDC to respond to cases.

While commiserating with the Nigerian Association Nurses and Midwives on the death of their member, the Minister also enjoined health workers to take the necessary precaution in treating patients.