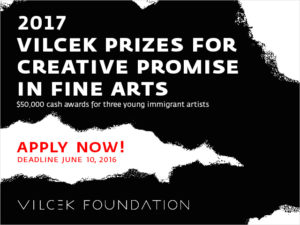 The Vilcek Foundation has announced Iman Issa, originally from Egypt, and Meleko Mokgosi, originally from Botswana, as recipients of the 2017 Vilcek Prizes for Creative Promise in Fine Arts.

The prizes were designed to recognize and support emerging immigrant artists who have made outstanding contributions to American society, and each include a cash prize of $50,000.

Her original area of study was phenomenology, a branch of philosophy that examines the structures of consciousness that organize subjective experience—or, put another way, how we take meaning from things we individually experience.

Later, Issa realized that art allowed for nuanced exploration of those topics, and continued her philosophical questioning through art.

She is particularly interested in monuments and memorials—aesthetic forms tasked with a function, that hold a shifting relevance based on their location in time and relationship to history.

Her work has been shown at the Solomon R. Guggenheim Museum, the 8th Berlin Biennial, and the New Museum, and she has received the DAAD 2017 Artist in Residence Award, the Louis Comfort Tiffany Foundation Award, and the HNF-MACBA Award. Issa was born in Egypt.

Meleko Mokgosi is a slow, considered painter; behind every painting he produces are hours of research, reading, and conversations with people. Mokgosi is interested in depictions of Africa and its people; he believes that the widespread misrepresentation of Africa and Africans has done a violence to the people of the continent, and through his art, he attempts a representation that is fair and just.

He is deeply concerned with politics, and seeks to understand and to illuminate the relations of power that shape people, families, villages, regions, and nations.

Mokgosi has been named the recipient of the Joan Mitchell Foundation Painters Grant and the Jarl and Pamela Mohn Award, and he has shown his work at Art Basel, the Armory, the Hammer Museum, and the Whitney Museum. He was born in Botswana.

The prize winners were selected by panels of experts in a variety of artistic disciplines.

All prize winners will be honoured at a ceremony in New York City in April 2017. In addition to prizes in fine arts, the Vilcek Foundation is also recognizing immigrants in the sciences with the 2017 Vilcek Prizes in Biomedical Science.