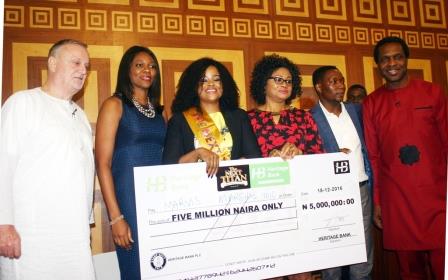 A winner has emerged in the Heritage Bank’s sponsored entrepreneurial competition show, The Next Titan Season 3.

The contest was won by a budding entrepreneur with unique business idea of turning trashes into beautiful furniture, Mrs Marvis Marshal-Idio.

Mrs Marshal-Idio went home with the star prize of N5 million from Heritage Bank, which is the headline official sponsor of the competition and a brand new car from Coscharis Motors.

At the grand finale held at weekend in Lagos, four finalists: Ronald Ajiboye, a first class graduate of a Russian University who is into drones production, Mrs Marvis Marshal-Idio emerged winner, Victoria Mamza, founder of Wangarau Foods was the 1st runner-up founder and Sunday Ewolabi of Naija Peanuts emerged as the 2nd runner-up.

Impressed by the commitment and tenacity shown by contestants in this year’s edition of The Next Titan, Nigeria’s Entrepreneurial Reality TV Show, Heritage Bank Limited has restated its commitment for the Small and Medium Scale Enterprises (SMEs) in Nigeria.

The bank said the scheme is a veritable platform through which the financial institution is propagating its campaign for youth empowerment programme in the country.

Mr Ife Sekibo, the Managing Director of the bank, who was represented by Mrs Ori Ogba, Divisional Head, SME & Retail, Heritage Bank, said he was satisfied with the degree of commitment shown by each contestant who participated in the competition.

Meanwhile, Mr Sekibo said Heritage Bank instituted The Next Titan with a view to igniting the entrepreneurial spirit in the youth.

His words: “At Heritage Bank, we have discovered that SMEs have a crucial role to play in nation building process anywhere in the world. This is why at Heritage Bank we shall not relent in our support for young entrepreneurs who have a clear projection of their future plans.”

He stated that that the bank’s participation the Next Titan TV Reality Show as lead sponsor is to reinforce the financial institution’s promise of supporting the sector and fighting unemployment in the country.

Meanwhile, Mr Mide Kunle-Akinlaja, the Executive Producer of the Next Titan commended the bank for the support given to the reality show.

“I want to thank the management of Heritage Bank, headed by the indefatigable and visionary entrepreneur, Mr Ifie Sekibo, for sponsoring this innovative Show. Heritage Bank has been greatly visible in the area of making future leaders in Nigeria. We are indeed grateful to Heritage Bank for being the major sponsor of the Show”, he stated.

According to him, the basic objective of the scheme is to demystify entrepreneurship and present it as a viable career options to millions of young talented graduates especially in this era of unemployment ravaging the nation.

The Next Titan TV Reality Show is a 10-week programme designed to ignite the entrepreneurial spirit of Nigerians.

The TV Reality Show gives an opportunity to young talented Nigerians who fall within the age bracket of 18-39 years with great, innovative and unbeatable business ideas, to compete against one another in real-life entrepreneurial challenges in a bid to ultimately win N5 million and a brand new car to start their new business or to support their existing business.

The Season 3 auditions were held in Abuja, Port-Harcourt, and Lagos with over 50,000 contestants participating.

The Next Titan is a global standard television platform aims at practically engineering entrepreneurship among Nigerian youths through identifying the best business minds and supporting their entrepreneurial acumen through financial and logistical assistance, informal training, knowledge and other requisite services needed to propel them into successful business personalities. 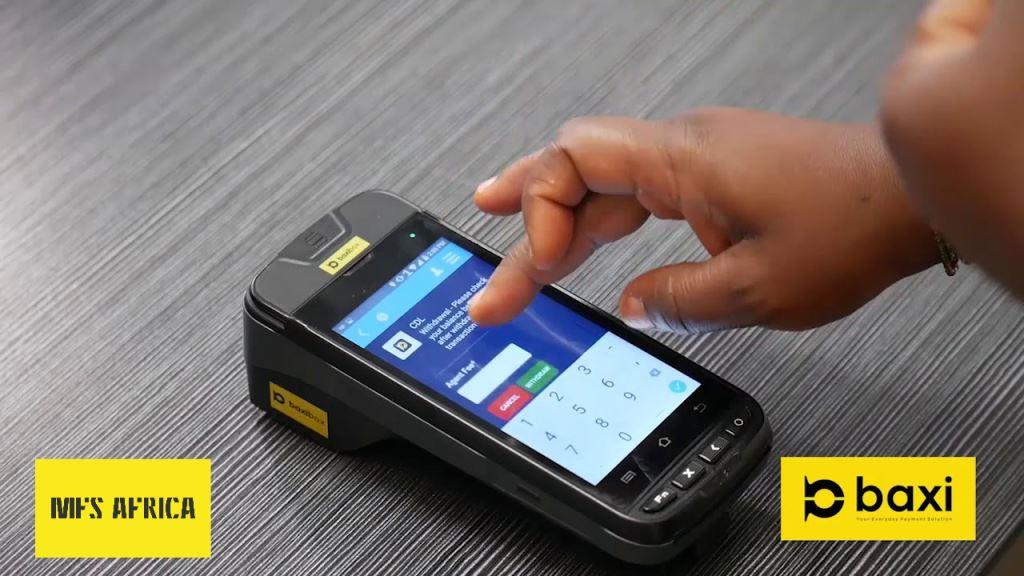 Nigerian fintech startup, Baxi, has been acquired by the Pan-African payments company, MFS Africa, giving way to its business expansion into Nigeria.

The acquisition of the Nigerian firm was sealed after MFS Africa signed an agreement with Capricorn Digital, Baxi’s parent business, for an undisclosed amount.

Founded in 2014, Baxi provides a cash-in or cash-out offering as well as value-added services like account opening, money transfer, bill payment and more, through its network of more than 90,000 agents.

These services are provided through the company’s retail network of agents and merchants in some of Nigeria’s most remote regions, through its BaxiBox POS, BaxiPay, Baxi MPoS Device, and BaxiRIMS products.

Recall that MFS Africa had earlier acquired East African payments management startup Beyonic, a Ugandan fintech startup and this time also, has plans to build Baxi into a key node on its digital payment network, allowing customers to make regional and global payments to and from Nigeria.

The deal, which is subject to approval from the Central Bank of Nigeria (CBN), sees MFS Africa expand into Nigeria for the first time, having had a limited presence thus far due to the country’s small number of mobile wallets.

Speaking on the acquisition, the Chief Executive Officer (CEO) of  Capricorn, Mr Degbola Abudu, expressed that the future of the mobile payments landscape in Africa is a game of few, where consolidation is the way forward, and attempting to scale alone would require more capital expenditure and a longer time to execute.

“By teaming up with MFS Africa, and with the strong support of our local commercial banking partners, we can offer more value-added products and services, such as cross-border payments, to support Nigerian SMEs in their growth.”

“We believe that we’ve barely scratched the market’s potential. The deal brings many things that allow us to grow very quickly,” Mr Abudu noted.

MFS Africa intends to build Baxi into a key node on its digital payment network, allowing customers to make cross-border payments to and from Nigeria, similar to what it’s done with mobile money operators across Africa. 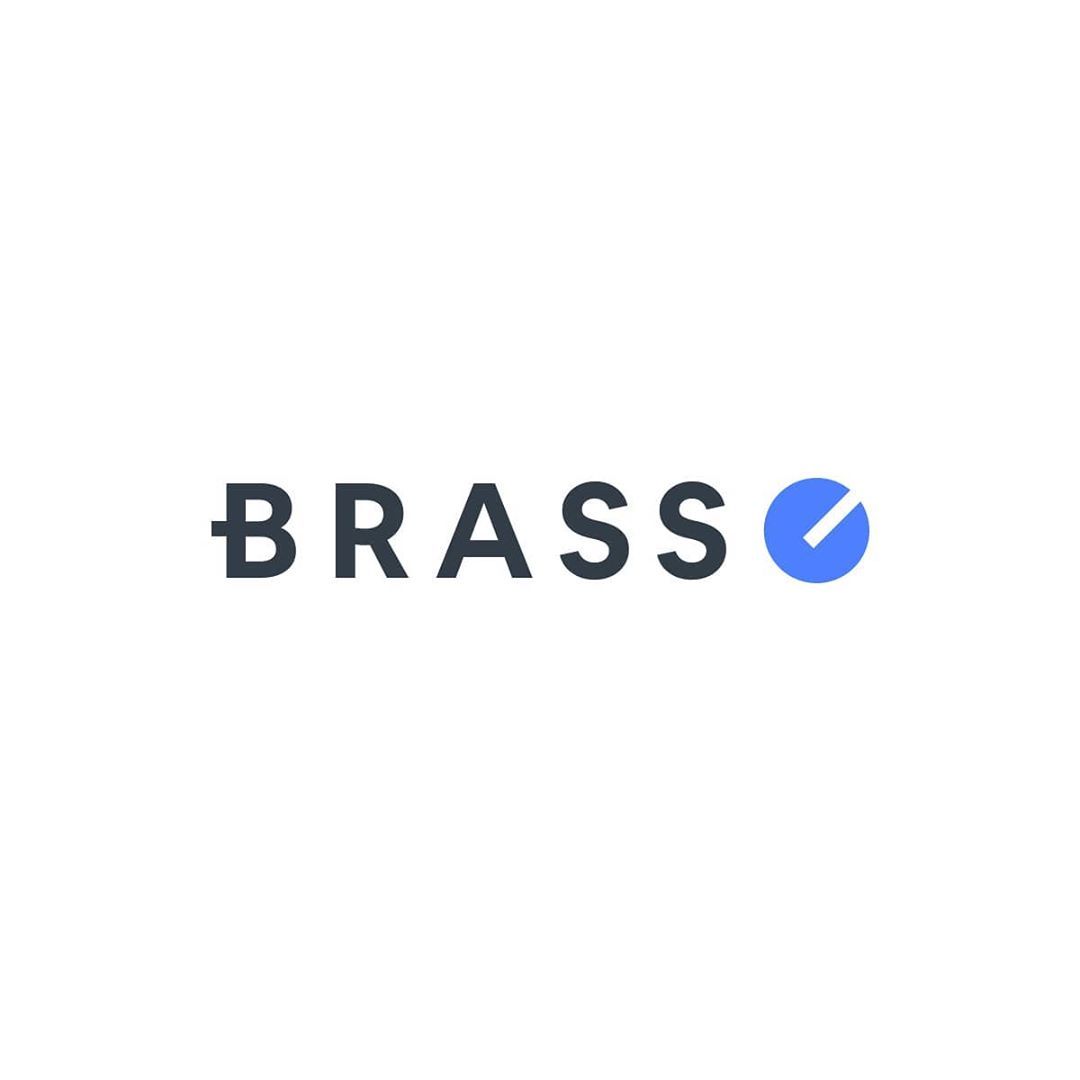 Provider of premium banking services for African Small/Medium Enterprises (SMEs), Brass, has raised the sum of $1.7 million in a funding round to strengthen its financial services rendered to local entrepreneurs, traders, and fast-growing businesses across the continent.

With the fresh funding, the Nigerian digital bank is set to launch a number of new product categories, which will lead to expanding its credit market presence.

Even as the startup is looking at broadening its customer base, the new financial capacity will facilitate its plans to accelerate its expansion into other African countries such as South Africa and Kenya.

Explaining further on the significance of the fundraising, the Co-Founder and CEO of Brass, Mr Sola Akindolu, who is a former Head of Product at Kudi Bank, noted that the contributions made by these investors, together with their expertise, will not only play a vital role ahead of Brass’s expansion into South Africa and Kenya, but also in the future ambitions outside of the continent.

“The basic needs of Africa’s SMEs are just as significant and unique as those of the customers they serve each day and now more than ever, we need innovative and world-class financial services solutions that meet their expectations.

“These local businesses have supported our economies for decades, forming the backbone of Africa’s success to date, and now is the time to bet on them.”

“At Brass, we’ve made some great strides over the last year in tackling one of Africa’s most critically underserved customer bases but with an estimated $5.1tn credit gap globally, our work is far from over,” he added.

Expressing excitement over the investment, Mrs Elizabeth Yin, General Partner at Hustle Fund, one of the investors, said “We believe Africa’s entrepreneurial ecosystem, and fintech sector is witnessing an unprecedented shift, and Brass is at the forefront of that, supporting local businesses and professionals with banking technology to supercharge their growth. We are excited by their vision, and honoured to be joining them on their journey.”

Having disbursed over $2 million in credit to business since inception, Brass’s recent solution which is ‘Brass Capital’ helps thousands of businesses scale up with its cash-flow financing design. 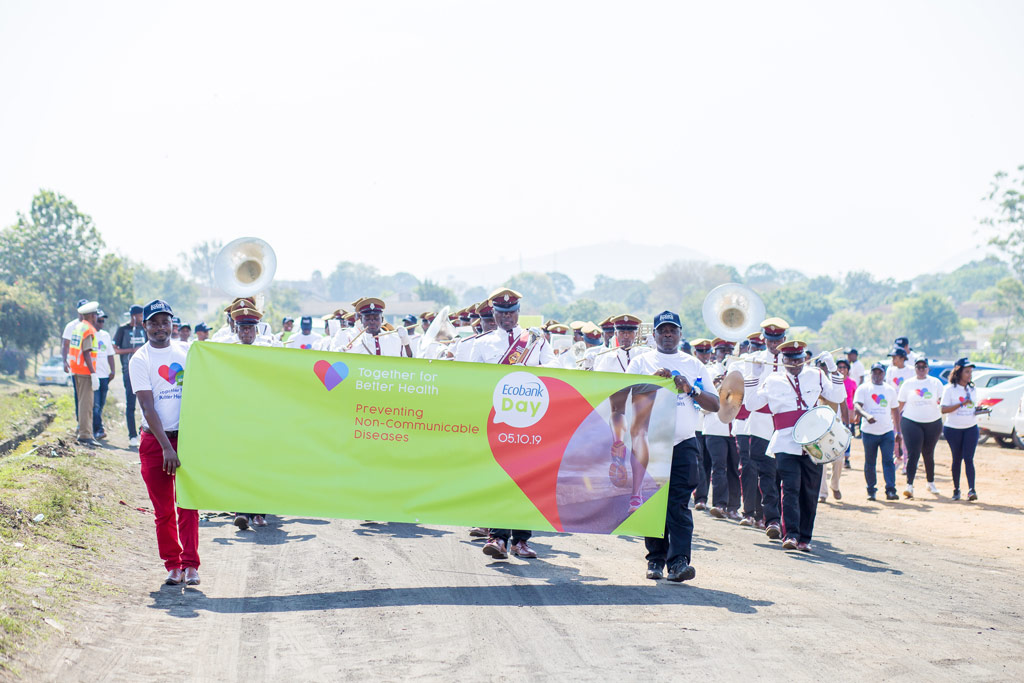 On Saturday, October 23, staff and families of the pan African financial institution, Ecobank Transnational Incorporated (ETI) across 33 countries of its operations on the continent will raise awareness for mental health.

This is a flagship annual event of the lender tagged Ecobank Day and in Nigeria, there would be impactful discussion sessions and mental health empowerment training programs to further raise awareness and help reduce stigma and discrimination in the country.

A statement issued by the Head of Marketing and Corporate Communication at Ecobank Nigeria, Mr Jide Sipe, disclosed that this year’s Ecobank Day is themed Mental Health – Time to Talk and Act! and it marks the start of the final year of the three-year campaign to raise awareness and help prevent Non-Communicable Diseases (NCDs) in Africa.

He further said a hybrid webinar will be hosted to “discuss mental disorders, raise awareness about them, and the care and support options available.”

“We will be encouraging people to talk about their feelings and suggest lifestyle behaviour changes which can also make a difference – like exercising regularly.

“There is often a lot of stigma around mental health. Those affected can face isolation, exclusion from work and family life, increased stress levels, negative addictive behaviours and substance abuse. No one should be made to feel ashamed because of a mental health issue. It can happen to anyone at any time,” he added.

It was gathered that some personalities invited for the programme include Dr Olusola Olowookere, Consultant Psychiatrist/Forensic Medical Examiner; Titilayo Medunoye, founder/CEO, Milky Express; Oluwakemi Akintoyese, Clinical Psychologist; Hadiza Blell-Olo, a humanitarian and artiste known as Di’Ja; Dr Tomilola Oyekunle, a registered psychologist and host of others.

Since the inaugural Ecobank Day in 2013, employees of the bank have supported a variety of causes and shown compassion for the welfare of various local communities.