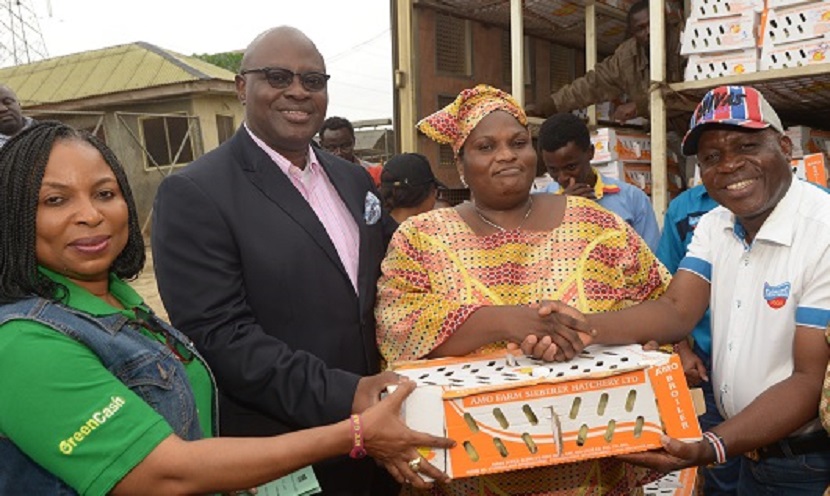 The farmers took delivery of 1000 birds each in a ceremony which held at Erikorodo farm settlement, Ikorodu, Lagos on Thursday, August 17, 2017.

The event had the CBN, Bank of Agriculture (BOA), the Ministry of Agriculture Lagos state, AMO Farms, Erikorodo Poultry Farmers’ Association well represented; a total of 10,000 Day Old Chicks (DOCs) were formally handed over to the beneficiaries following the delivery of 38 tonnes of feeds for the six weeks rearing period, three days prior.

While addressing newsmen shortly after the handing over ceremony, the Coordinator of natnuPreneur, Mr Gbolade Adewole expressed satisfaction at the success of the event pointing out that it is another feather added to the cap of the natnuPreneur initiative.

“This is another success we are recording here today. It is a thing of joy for us at Amo Farms to have our farmers kick start the pilot phase of this CBN initiative. It tells you that there is something we are doing right and I can assure that this scheme will be a success”.

“With the technical support and training we render farmers through our  team of Animal Scientists, veterinary doctors, customer satisfaction representatives, I am sure that in the next six weeks, our farmers would have successfully reared these chicks into healthy broilers, which we’ll be buying back from them, at the agreed off-take price,” he said.

Mr Adebisi explained that as part of realizing the food security goal of the Federal Government, the CBN in collaboration with Amo Farm Sieberer Hatchery Limited, has engaged 33 farmers registered under the natnuPreneur out-grower scheme, in a pilot phase of broiler production.

Explaining the role of the CBN in the programme, Mr Adebisi said “This is the pilot phase for the poultry farmer’s ABP in Lagos. This might appear like a small project at the moment but we assure you that by the end of this year, there will be hundreds and if possible thousands of farmers involved in this scheme.

“The scheme will cut across other areas of agriculture, but, we are starting with poultry because, unlike others, it’s not seasonal.

“The CBN has invested a lot into this programme and we will still invest more. What we have done is to provide the farmers with the finance needed to buy the birds, the feed and other inputs necessary materials to successfully rear the birds.”

He said that as part of measures already in place to ensure the success of the scheme, a ready market has been prepared for the farmers in natnudO foods through natnuPreneur broiler out-grower scheme. He assured them that, market changes will not affect their selling price as the already agreed selling price will apply at the end of the cycle notwithstanding possible market changes.

In his words, “The Anchor, natnudO Foods, who is also the off taker, has guaranteed that they will buy off all the produce at the end of the cycle at a fixed price.

“So it’s not a situation where the farmers at the end of the day will be looking for a market or people to sell their produce to, there is a ready market for them.

“Also, price risk as a result of market changes will not affect them because; the broilers will be bought at the agreed price. So it’s a win –win situation for all the parties involved.”

He expressed optimism that in the next six weeks the DOCs would be ready for culling, and assured that it will be a successful outing.

While also addressing the farmers, the General Manager, Policy and Strategy, AMO Group, Mr Toromade Francis noted that the achievement is an addition to the success natnudO Foods has recorded with its natnuPreneur scheme.

In his words: “For us this is not the first time. So far, we have onboarded about 1,219 natnuPreneur farmers nationwide, culled over 3.8 million birds and paid over N4Billion to farmers across the country. So, this is just an addition to what we have done.”

He advised the farmers to be committed, effective and prudent while assuring them that natnudO Foods being the anchor to the programme will provide all technical support needed for them to succeed. He assured them that the chicks, feed and other inputs that have been given to them are of the highest quality.

“I assure you that, as the anchor in this programme, we will support you with all the technical assistance you require, as we assume that after six weeks, you would have been able to achieve the weight expected.

“This is a journey which is starting today and we hope that by this time next year, we should be harvesting hundreds of thousands of chickens from these farms. We have increased the capacity of our abattoirs, we have decentralized and are now processing in Port Harcourt and Kaduna just to ensure that we accommodate all the chickens that you will raise, we’re also constructing an abattoir in Uyo,” he said.

Speaking on behalf of the farmers, Captain Eka Justus, the Chairman, Erikorodo Poultry Farmers Association thanked the CBN, BOA, Lagos state ministry of Agriculture and AMO Farms for the opportunity and promised that the farmers will not disappoint them.

“We want to express our joy at this opportunity because, to be selected amongst all the farms in Lagos State as the first beneficiary of this programme is an honour and privilege. We say a big thank you to CBN, BOA, Ministry of Agriculture, Amo Farms and natnudO Foods. We assure you that we will not let you down” he said.

The Anchor Borrowers’ Programme (ABP) was established by the CBN and launched by President Muhammadu Buhari (GCFR) with the intention to create a linkage between anchor companies and small holder farmers (SHFs) providing them with key agricultural commodities.

The programme thrust of the ABP is provision of farm inputs in kind and cash to small holder farmers to boost production of commodities, stabilize inputs supply to agro processors and address the country’s negative balance of payments on food.

At harvest, the SHF supplies his/her produce to the Agro-processor (Anchor) who pays the cash equivalent to the farmer’s account.