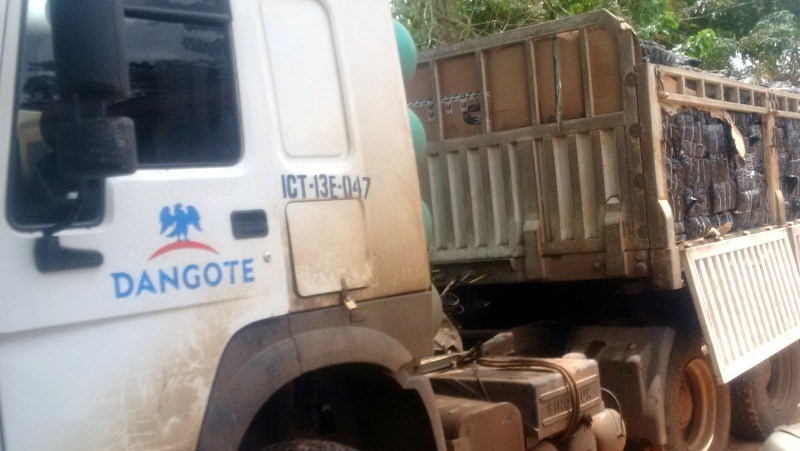 The truck, from the company’s cement factory located in Ibese with registration number ICT-13E-047, was seized in the early hours of last Saturday in Ogun State with 3,000 cartons of the contraband products it was carrying.

Addressing journalists yesterday about the development, Comptroller of NCS of Ogun State Command, Mr Sani Magudu, disclosed that the driver of heavy duty vehicle bolted away upon sighting his men in Abeokuta, the Ogun State capital.

He said the smugglers were not aware that they were being monitored from‎ the point of packaging of the products until the vehicle was intercepted at about 3:45am on Saturday at Sagamu interchange, which links the Lagos-Ibadan Expressway‎.

According to him, the products in over 3,000 cartons were valued at N47.3 billion and had duty value of N20.3 billion.

The Customs boss said, “A trailer belonging to Dangote Group loaded with 3,000 cartons of frozen turkey was intercepted on Saturday, September 16, 2017 at about 3:45am along Sagamu-Abeokuta interchange.

“We are one step ahead of them. The smugglers now connive with Dangote truck drivers. We started monitoring them from their loading spot to Sagamu interchange where the vehicle was intercepted,” he said.

He said the motor boy of the truck was arrested but the driver ran away.

The comptroller vowed that the fleeing driver would be arrested and prosecuted with the other suspects.

Meanwhile, the management of Dangote Group, in a statement issued on Tuesday, appealled to members of the public to assist in monitoring both the recklessness and the illegal haulage of contraband goods by some of its truck drivers.

“The Management of Dangote Industries Limited hereby alerts the public to report any suspected Dangote truck driver involved in illegal haulage. Please call Dangote Industries Management hotline on all information regarding illegal haulage activities on 08070188000, 01-2123567, 08170023846, 08152093133 and or email us at CustomerCare@Dangote.com,” the statement said.

The firm also issued a stern warning to those illegally transporting unauthorized goods through its trucks.

“Dangote Industries Limited also wishes to warn those that illegally transport materials on Dangote trucks that such unauthorized goods, when found, shall be confiscated and such owners prosecuted to the full extent of the law,” it said.

Stocks to Watch Out For This Week