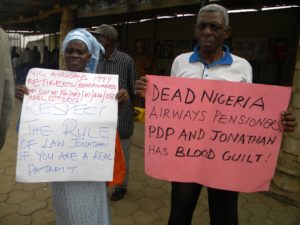 The Federal Executive Council (FEC) on Wednesday, July 12, 2017, approved the sum of N2.7 trillion for payment of some debts owed by the Federal Government.

Minister of Finance, Mrs Kemi Adeosun, made this known while briefing State House correspondents after the FEC meeting held at the Presidential Villa, Abuja and presided over by the Acting President, Mr Yemi Osinbajo.

She said the approved about N2.7 trillion comprises N740 billion meant to pay pensioners, including former employees of the defunct Nigerian Airways, as well as promotional salary arrears.

“The council approved N750 billion for the payment for salary arrears and pensions as far back as 2009, including that of the former Nigerian Airways workers,” the Minister told newsmen.

Mrs Adeosun further disclosed that N1.93 trillion was approved to settle obligations including dues to federal government contractors and suppliers.

According to her, the obligations were accumulated by the government over the last 20 years, but would be paid by issuing bonds and promissory notes.

The Minister explained that this option was adopted in order to stimulate economic activity in the country.

“Some of the obligations date back as far as 1994. The resolution of this will significantly enhance liquidity in critical sectors of the economy,” the Minister said.

It was gathered that these obligations consist of dues owed to state governments, oil marketers, power generation and distribution companies, suppliers and contractors to federal government parastatals and agencies, payments due under the Export Expansion Grant, EEG, outstanding judgement balances as well as pension and other benefits to federal government employees.

“We are enhancing the government’s controls and processes to ensure we do not find ourselves in this situation again.

“Over the last two decades the federal government has built up over N2.7 trillion of obligations which were not cash backed, and remain outstanding to this day,” Mrs Adeosun said.

She said further that the Federal Government has “developed a solution that will simultaneously resolve these issues, and deliver a boost to economic performance.”

“Our solution will remove the drag on economic performance these obligations cause, improve liquidity in key sectors, especially the power sector where we will resolve FG dues to the distribution and generation companies, and so boost investor confidence,” she noted.

Nigerian Airways was liquidated in 2003 by President Olusegun Obasanjo administration and the Inter-Ministerial Committee set up by the Federal Government in 2006 recommended the sum of N78 billion as the total severance package for 10 years for the workers, including pension arrears for the period after the physical verification of about 6,000 beneficiaries.

However, the Presidential Initiative on Continuous Audit (PICA) set up by President Muhammadu Buhari in its recommendation slashed the sum to just N43 billion, a 45 percent reduction, a move that did not go down well with the Minister of State for Aviation, Mr Hadi Sirika, who insisted that the earlier approved sum of N78 billion must be paid to the beneficiaries.