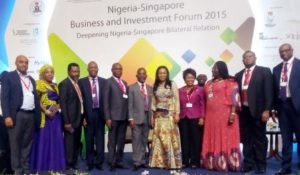 The Federal Executive Council (FEC) has approved an agreement for the avoidance of double taxation and the prevention of evasion of taxes on income and capital benefits, between Nigeria and Singapore.

This decision was reached on Wednesday at the FEC meeting presided over by Nigeria’s Vice President, Mr Yemi Osinbajo, in Abuja.

According to the Minister of Finance, Mrs Kemi Adeosun, who briefed State House Correspondents after the meeting, explained that the agreement is aimed at encouraging more direct foreign investments into Nigeria.

Mrs Adeosun further explained that the deal is aimed at letting investors know what their tax obligations will be and ensuring sustainable tax regime for each country.

She said the agreement sealed because Singapore remains a major trading partner with Nigeria.

Also addressing newsmen, Minister of State for Aviation, Mr Hadi Sirika, said Singapore was fast becoming the most efficient and biggest hub around the far-eastern part of the globe, serving New Zealand, Australia, Japan, China, Singapore, Indonesia and others.

“We thought that in our efforts to also create a hub within Nigeria, the centre of Africa, we can leverage on the opportunity to create air services between the two countries.

The agreement seems to be an indication that Singapore’s rejection of clemency appeal by a Nigerian man, Mr Chijoke Obioha, accused of drug possession and executed by the Asian country, has not affected its bilateral relations with Nigeria.