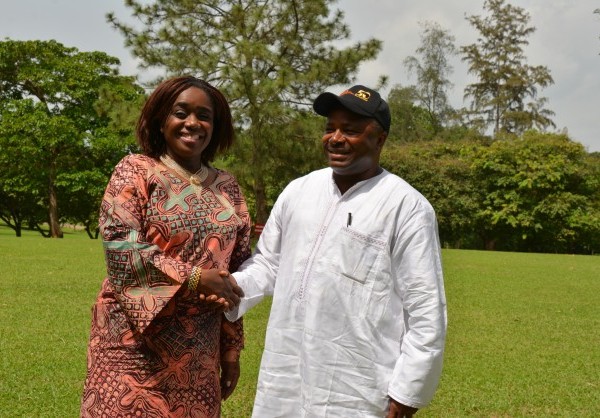 Nigeria’s signatory to the ENABLE youth program will make the oil-rich country the third African country coming behind Cameroon and Sudan to benefit from funds under the AfDB Feed Africa initiative.

The ENABLE youth program is modelled after the International Institute of Tropical Agriculture (IITA) Youth Agripreneur (IYA) scheme, which has seen a lot of success.

Mrs Adeosun said that she was inspired and impressed with the concept and the testimonials of the young agricultural entrepreneurs.

“We came here (IITA) to assess a project (ENABLE Youth) being considered by the Federal Government. From what I have seen today, I am extremely impressed and inspired! We should work on how we can roll out this project nationally,” the Minister said during a visit to IITA in Ibadan on June 10.

Like several other African nations, Nigeria is caught in between rising youth employment and food insecurity.

In 2012, Dr Sanginga initiated a youth in agriculture program to serve as a model for African nations to emulate and prosper.

Under the model, youths are trained – both in theory and practice – and mentored with a view to changing their mindsets towards agriculture. In the end, they key into startups in the agricultural value chains.

Dr Sanginga said the IYA model was a template that would help African countries tackle the challenge of unemployment on the continent and create wealth.

“We have tested it in IITA, Nigeria, and several countries and it is working,” he said.

Testimonials on how the IYA program is creating jobs, wealth, and transforming agriculture abound. For Mercy Wakawa from Biu, Borno state, the training provided by IYA through N2Africa project funded by the Bill & Melinda Gates Foundation 2 years ago had helped her establish a medium scale groundnut oil processing industry that provides employment for seven other youths and supports the local groundnut industry.

Ajibola Olaniyi leads a team of two other young people who ventured into catfish farming. Without prior knowledge about fish farming but with support from IITA, Ajibola and her team resuscitated four abandoned ponds and later expanded to 17 with a capacity of 150 tons of fish production per year.

The expansion of the business also created jobs for short-term staff who work with the team in managing the ponds. The business is growing with clients coming from the various geo-political zones in Nigeria to patronize the products.

TOFAN Foods is a subsidiary of IITA Youth Agripreneurs. The business, which is owned by three young people who were trained under the processing unit of IYA, is producing Tidbit. The snack is made from high quality cassava flour and cowpea. TOFAN Foods has been established in Ijebu-Ode, Ogun State, and will be scaling out the technology learned during the incubation period in IYA.

Oyindamola Asaaju, another Agripreneur, used to serve tables at a restaurant, but after getting involved with IYA, she now leads a group of Agripreneurs in Onne, Rivers State. The group is using the IITA Station in Onne to develop new agribusiness enterprises in poultry, catfish, and micro-propagation of plantain, and serve as an incubation center for young people.