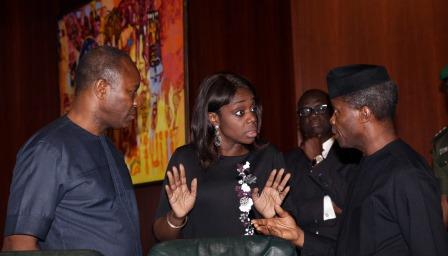 Minister of Finance, Mrs Kemi Adeosun, has disclosed that 30 percent of the Nigeria’s demand for foreign exchange was for fuel importation.

Mrs Adeosun made this known in Lagos on Friday at the launch of ‘FirstGem’, a product of First Bank of Nigeria Ltd., aimed at empowering women through wealth creation.

According to her, government was working very hard to transform the country from consumption driven to investment driven nation.

The Minister revealed that it was disheartening that Nigeria exports crude oil and imports petroleum.

“We lose a lot of money exporting unprocessed raw materials. We don’t have the power to process and that’s why we need to build infrastructure to export processed products in order to earn more foreign exchange,” she said at the occasion.

The Finance Minister noted that the Federal Government was committed at rebuilding the country’s infrastructure to boost local production for job creation.

“If we have an enabling infrastructure such as power, roads , among others, cost of doing business in Nigeria will reduce drastically,” Mrs Adeosun said.

She said that government would continue to improve the country’s competitiveness through the provision of basic amenities.

The Minister further said that funds borrowed by the government would be tied to capital projects to boost infrastructure development.

She stated that government revenue had reduced due to drop in the price of oil at the global market.

She said, “It is a difficult time but we will get out of it. We will survive and get better. Nigeria is tough but we are very resilient.”

Speaking on the FirstGem product, Mrs Adeosun said that women were very critical to the country’s development.

She said that women needed to be financially independent as they represent 52 per cent of the country’s population, adding that, 70 per cent SMEs operators were women.

The Minister, who commended the bank for introducing the product, noted that FirstGem would help women to show track record of success that would make banks to offer them funds to grow their businesses.

Mrs Adeosun stated that women must learn to save and stick with their budget in order to prepare for tough times, noting that, women must not spend all their monies on consumables.

She said, “Women have to open their eyes, your children are not your pension because it doesn’t work anymore.”

Also speaking, the wife of the Vice President, Mrs Dolapo Osinbajo, who was the special guest of honour, commended the bank for the product aimed at empowering women.

Mrs Osinbajo urged women to take advantage of the product and empower themselves, noting that, recession had opened up a lot of opportunities that were yet to be tapped.

The Chairman, Board of Directors, First Bank of Nigeria Ltd., Mrs Ibukun Awosika, said that the product was introduced to support and make women more financially responsible to be good entrepreneurs.

She added that the given country was going through tough times and women needed to wake up in order to support their families.

She said, “We want to ensure that women stand on their own when the need arises, its time for the women to wake up and must not be a liability.

“We want to use the product to challenge the mind of women to save and have the capacity to stand on their own.”

The FBN Chief Executive Officer, Mr Adesola Adeduntan, said the significant role of women in economic development was not debatable.

Mr Adeduntan said that FirstGem was initiated in order to empower more women to contribute their quota to economic development.

He said, “When women thrive the whole society benefits because there will be sustainable growth.”