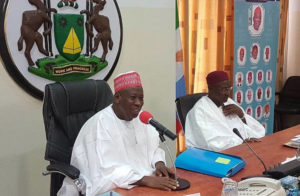 Kano State Governor, Mr Abdullahi Umar Ganduje, has presented the 2017 budget to the State House of Assembly for approval.

According to the budget, capital projects will gulp over 100 percent of the amount earmarked for recurrent expenditures.

The N210 billion appropriation bill has about N131 billion set aside for capital projects, while the recurrent expenditures would take N79 billion.

Presenting the proposal themed ‘Budget of Sustainable and Self Reliance’ to the state lawmakers, the Governor explained that it would be funded from the Federation Account as well as Internally Generated Revenue (IGR).

According to him, N99.990 billion is expected from federal allocations, while about N143.7 billion would be generated from IGR.

Mr Ganduje also said he was committed to providing infrastructure in Kano State.

From the analysis, the 2017 budget is about N66 billion than that of the out-going financial year.