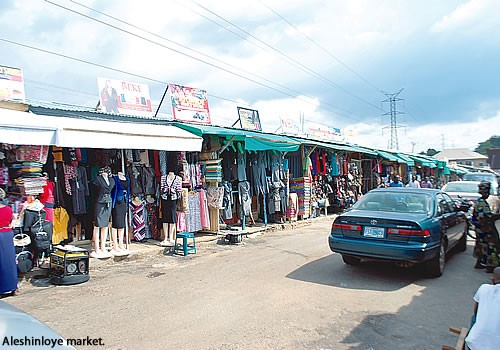 The planned eviction of traders at the popular Aleshinloye market in Ibadan South West Local Government Area of Oyo State is already meeting a brick wall.

This is because traders at the market have rejected the council’s eviction notice issued to them and have now called on the state government led by Mr Abiola Ajimobi and the Oyo State House of Assembly to urgently intervene in the matter.

The local government had in a letter entitled ‘Notice to Quit’ dated November 18, 2016, directed all shop owners within the vicinity of Aleshinloye market  clinic to vacate their stalls within seven days.

The market was to pave the way for the construction of a shopping complex.

The letter was signed by one Ayelagbe O. A on behalf of the Caretaker Chairman, Mr Rauf Folarin.

According to the News Agency of Nigeria (NAN), all efforts made by the market executives and the affected traders to stop the planned eviction, which expired last Friday, have failed.

One of the affected traders, Mr Saka Salami, who was at the meeting, told newsmen that the council authorities were bent on demolishing the shops.

“We were at the local government with the market executives to prevail on the chairman but he refused.

“He gave us seven days ultimatum. We told him that we were not illegal occupants but we were given permit.

“All appeals fell on deaf ears. Instead, the chairman said that when completed, a shop shall be allocated to two people,” he said.

A female trader, who simply identified herself as Mama Ayo, also maintained that the traders had valid allocation.

She said: “We were given permanent allocation by the council and we also pay tenement rate annually.

“It is wrong to revoke our permit. We were not given any long notice. Why would the council that legalised our stay turn round against us?”

Eze Quintus, a fresh university graduate and trader at the market, said: “Now there is no job in the country. I am a graduate; I used my allowance to get the shop.

“If we are evicted from the market, do they want us to steal? Some of our executive members in the market are compromised.

“We are appealing to the governor and the House of Assembly to intervene in this matter before things go wrong.’’

It was learnt that the traders had obtained the allocation paper to trade on the land in 1992 and it was signed by the Commissioner for the Justice of the Peace to the council.

The Information Officer in the local government, Mr Segun Adeyemo, confirmed the development, saying the council chairman directed that the eviction notice be served on the traders.

According to the council’s spokesman, the Director of Estate and Valuation in the council, Mr Gabriel Oyeniyi, said the notice was served on traders adjacent to the fence of the zonal revenue office of the local government and sharing the same premises with the market clinic.