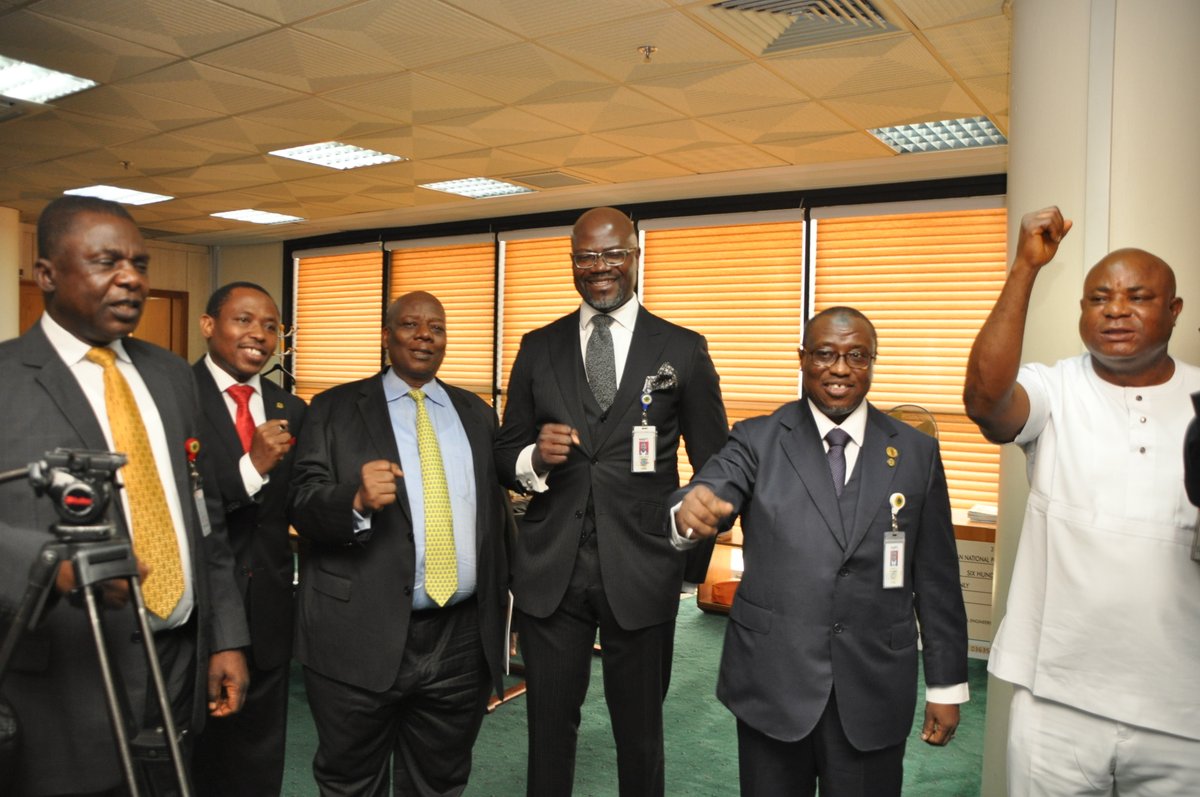 The two bodies, at a solidarity visit to the GMD yesterday, expressed support for Mr Baru, saying they have confidence in his leadership style.

The unions’ visit came on the heels of the recent controversies over a letter the Minister of State for Petroleum Resources, Dr Ibe Kachikwu, forwarded to the President alleging non-adherence to due process by the Management of NNPC in some contract administration.

National President of PENGASSAN, Comrade Francis Johnson, said the unions and their members considered it appropriate to rally round the GMD and the NNPC Management to pledge their support.

Comrade Johnson said the unions’ support for the GMD was based on his ability to walk his talk since assuming office last year.

“The National body of PENGASSAN and all the NNPC in-house unions are here today to show our support for you. You have brought stability to the NNPC and we are happy today that staff morale is high.

“You were Chairman of NNPC Anti-Corruption Committee for over five years and that was what informed your appointment as GMD of NNPC.

The PENGASSAN President called on Nigerians to be cautious of their comments on the controversy, adding that any wrong information was capable of discouraging investors from the oil and gas industry which is the highest foreign exchange earner.

The NNPC Group Chairman of PENGASSAN, Comrade Sale Abdullahi, who also spoke during the visit to the GMD, stated that their concern had to do with the need to protect not only the GMD but the NNPC as an institution.

He noted that Dr Baru had streamlined the processes and procedures in the Corporation leading to the full restructuring which was beginning to yield positive results.

“Today, the GMD and NNPC Management receive inputs from staff and this gesture by Dr. Baru has given members of staff a sense of belonging. Today, our inputs are being implemented and we are highly motivated,” Comrade Abdullahi stated.

Supporting these positions, the Group Chairman of NNPC NUPENG, Comrade Udofia Odudu Benjamin, said the unions would continue to pray for divine guidance for Dr Baru and the entire NNPC management.

Earlier, the Chairman of NNPC Corporate Headquarters Chapter of PENGASSAN, Comrade Mathew Duru, reiterated the continued support of the unions for the Dr Baru-led management.

“We just want to tell the GMD from the bottom of our hearts that we are with him and the Top Management; that we are behind the GMD who has done very well in turning the fortunes of the corporation around,” the union leader stated.

He said since Dr Baru assumed office, he had succeeded in clearing the air of uncertainty that prevailed in the corporation because of visionless reforms that left NNPC on the brink of collapse.

He also said the GMD succeeded in resolving the NNPC Pension challenge that had led to disenchantment among staff.

“We are with you. We want to let you know that you are not an orphan”, Mr Matthew emphasized.

Responding, Dr Baru dismissed the allegations of award of contracts without regard to due process as unfounded and unfortunate.

He explained that as a former chairman of the NNPC Anti-Corruption Committee, he would be the last person to breach the procurement process by disregarding extant laws and rules.

The GMD said both the NNPC Act and Public Procurement Act vested procurement powers on the NNPC Tenders Board, the President and the Federal Executive Council (FEC) depending on the cost threshold, stressing that the NNPC Board had no role whatsoever in the process.

“I know for those of you who are following what we are doing here, you know that there’s no money lost and no process has been breached. Our contracting process is perfect and we will continue to follow the process. The NNPC Board has no role, I repeat, has no role as far as the contracting process is concerned,” Dr Baru emphasized, adding that the NNPC Tenders Board was made up of the GMD as Chairman and the Group Executive Directors as members.

On the crude term contract and the DSDP agreements, he explained: “These are not contract as such, they are essentially pre-qualification of off-takers of crude oil and in the case of DSDP, of those that will take crude and give us products in return. So there is no value to them. But humongous figures have been put forward mainly to incite the public, it is most unfortunate”.

On the allegation of lop-sided promotions, the GMD asked the union leaders if their members felt disenchanted to which the unionists chorused a resounding “no”.

He urged the union leaders to enlighten their members on the facts and encourage them to go about their duties without distraction.

Related Topics:NUPENGPENGASSANsupport baru
Up Next

My Target is to Feed 320m People in West Africa—Dangote