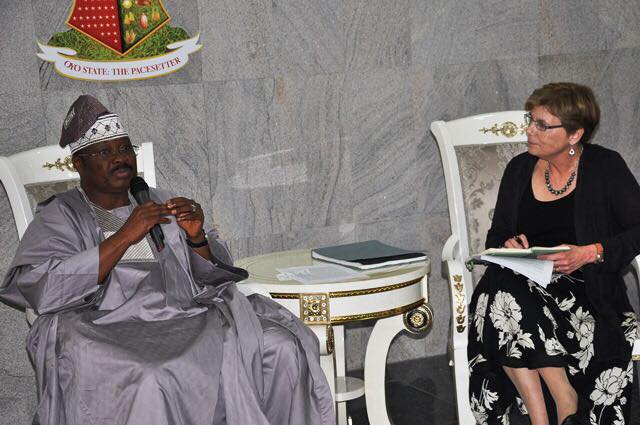 Research and academic institutions in Nigeria has been urged to close ranks and evolve pragmatic strategies for the development of agriculture to enhance food sufficiency and job creation.

This was the advice given by the Oyo State Governor, Mr Abiola Ajimobi, while addressing a delegation from the Michigan State University, United States, led by the institution’s Director of Agriculture and Youths Laboratory, Dr Julie Harward, in his office, in Ibadan, on Wednesday.

Mr Ajimobi said that the reputation of the Michigan State University in technology was reassuring, adding that a synergy between the college and the state’s academic and research institutions would be beneficial to the youths in the area of job creation, especially in the agricultural sector.

“A synergy with the Michigan State University by research institutions and our college of agriculture will go a long way to maximize the job creation drive of our administration, especially in the agriculture sector.

“These institutions are capable of helping to train our younger ones in the college of agriculture through crash programmes of six to eight months,” the Governor said.

He added that, “The possibility of a network among these institutions will be to our utmost advantage as these young undergraduates would have had enough training before graduating. I, therefore, urge them to close ranks to boost the agriculture sector and help the country attain food sufficiency.”

According to him, Oyo State had developed its own agric programme, tagged Agric-Oyo, which, he said, was targeting over two million jobs for the youths, stating that agriculture was the current flagship programme of the administration.

He said that the ongoing repair works on the Lagos-Ibadan express way and the proposed rail project would boost agriculture production and the transportation sector across the South-West in particular and the country in general.

In her response, Dr Harward, who led the delegation, said that the Michigan State University would be excited with the possibility of training ten thousand youths towards youths on empowerment and enterprise.

She said that the institution’s intervention was aimed at reducing poverty and restiveness among the youths through productive engagement and training for self-sustenance.

“We all know that youths in their large number would contribute greatly to the economy of the country if they are empowered through training to be self-sustained in enterprise and agriculture.

“We are happy about the developmental strides of the state, especially in the area of job creation for the youths. Without doubts, creation of two million jobs through agriculture would go a long way to reduce the level of dependence on government,” she said.