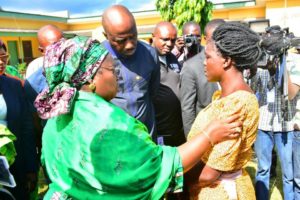 Parents of students of six students of Lagos Model College, Igbonla in Epe kidnapped on Thursday morning by suspected militants have been assured of their safe return.

This assurance was made by the Lagos State Deputy Governor, Mrs Idiat Oluranti Adebule, when she visited the school on Friday.

The Deputy Governor who went directly to the school on arrival from an official assignment in Abuja, said security efforts have been initiated by the state government to ensure that the abducted children were rescued safely and unhurt.

“We are on top of the situation and the Governor has directed all security operatives to step up action on rescuing the students, details of which l cannot disclose in order not to undermine their operation,” she stated.

Mrs Adebule, in an emotion-laden voice, urged parents of the affected children to be calm as the government will stop at nothing to ensure safe return of their children.

While condemning this act of anti-social behaviour, the Deputy Governor appealed to the conscience of the kidnappers to release the children and allow them to reunite with their families.

She commended the management of the school for being proactive in mobilising security operatives who engaged the gunmen before they escaped and urged residents of the area and environs to support government efforts in beefing up security around the school.