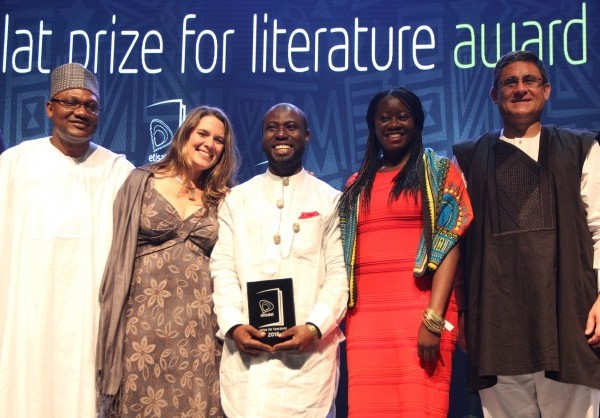 A Nigerian writer, Mr Jowhor Ile, has been announced as winner of the 2016 edition of the Etisalat Prize for Literature, arguably the most prestigious pan-Africa literary prize for first-time novelists of African origin.

Mr Ile won the competition through his 256-page novel entitled ‘And After Many Days’, which was set in Port Harcourt, Rivers State, in the oil-rich Niger-Delta region of Nigeria. His piece tells the story of a family whose 17-year old son and sibling, Paul Utu, goes missing during the rainy season of 1995. Burdened with the sudden loss, the family is torn apart, as their search for answers uncovers several family secrets.

The writer was announced winner of the prize at an award presentation ceremony on Saturday, May 20, 2017, in Lagos.

He received £15,000 prize money, an engraved Montblanc Meisterstück pen, and an Etisalat-sponsored fellowship at the University of East Anglia where he will be mentored by Professor Giles Foden, author of The Last King of Scotland.

Another Nigerian, Julie Iromuanya, author of the book, ‘Mr & Mrs Doctor’, and a South African, Jacqui L’Ange, author of ‘The Seed Thief’, emerged as the runners-up for the prize.

Mr Ile’s novel was unanimously selected as the winning book among the three shortlisted titles by the three-member Judging Panel chaired by award-winning novelist and poet, Helon Habila. Other members of the panel are Edwige-Renée Dro and Elinor Sisulu.

Habila said Mr Ile’s novel, ‘And After Many Days’, met the required standards of originality, creative excellence and African sensibility, in keeping with the objective of the Etisalat Prize, which is to promote literary excellence in Africa.

Chief Executive Officer of Etisalat Nigeria, Mr Matthew Willsher, congratulated the winner and the runners-up, and restated the company’s commitment to continuously offer Nigerians and other Africans the best platforms to express their passion and creativity.

“From the outset, our vision at Etisalat has been to support innovation, creativity and talent development. This is why we have stayed focused on providing platforms that enable people, not only communicate and stay in touch with one another, but also to express their individual creative abilities,” he said.

Born in 1980 and bred in the city of Port Harcourt, Nigeria, Mr Ile took to writing early and has had some of his short stories published in McSweeney’s Quarterly and Litro Magazine.

As part of the annual prize, Mr Ile and the two runners-up will participate in an Etisalat-sponsored multi-city book tour.

Furthermore, Etisalat will purchase 1,000 copies of their books for distribution to schools, libraries and book clubs across Africa.

Past winners of the Etisalat Prize for Literature include Democratic Republic of Congo’s Fiston Mwanza Mujila (2015), for his novel, Tram 83; South African writer, Songeziwe Mahlangu (2014) for his novel, Penumbra and Zimbabwean writer NoViolet Bulawayo (2013) for her novel, We Need New Names.