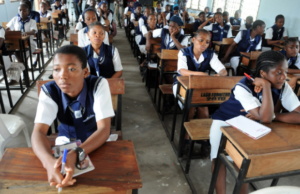 As the world marked the International Day of Women and Girls in Science, the Director of the United Nations Information Centre (UNIC), Mr Ronald Kayanja has underscored the need to encourage girls to study science subjects and explore careers in the Sciences to break the socio-cultural barriers that discourage girls and women from making career choices in science and technology.

More girls and young women should be encouraged to go into the Sciences as “there are no subjects for boys and another for girls, what boys can do, you (girls) can do even better.” Mr Kayanja said while speaking at the 2017 International Day for Women and Girls in Science event organized by UNIC and ‘Yes I believe Academy’ (YIBA) at Supreme Education Foundation School, Magodo Lagos.

Attended by 200 girls from three Secondary Schools, the observance featured presentations by women in the Sciences as well as a playlet by the students of Supreme Education Foundation.

The United Nations (UN) has declared every 11th day of February as International Day for Women and Girls in Science, due to its concern about changing the trend of gender inequality in the Sciences and its commitment to increasing the participation of more girls and young women in Science,”

In Africa, Mr Kayanja explained, fewer girls are in the Sciences. This he said is due primarily to the socio-cultural belief that sciences are meant for boys and not for girls and secondarily to lack of motivation from parents to make girls pursue career choices in Science.

He enjoined that girls and women must be empowered at every level, in learning and research across all scientific fields.

In his message on the observance, the United Nations Secretary-General Antonio Guterres observed that for too long, discriminatory stereotypes have prevented women and girls from having equal access to education in science, technology, engineering and math (STEM). “These stereotypes” according to him, “are flat wrong. They deny women and girls the chance to realize their potential – and deprive the world of the ingenuity and innovation of half the population.”

He urged commitment to end bias, greater investments in STEM education for all women and girls as well as opportunities for their careers and longer-term professional advancement so that all can benefit from their ground-breaking future contributions.

Obviously inspired by the speakers, who were all women with thriving careers in the Sciences, the girls, during the interactive session, expressed their willingness to pursue careers in science and technology. The need to offer mentoring opportunities to young women scientists to assist in their career development was repeatedly stressed by the speakers.