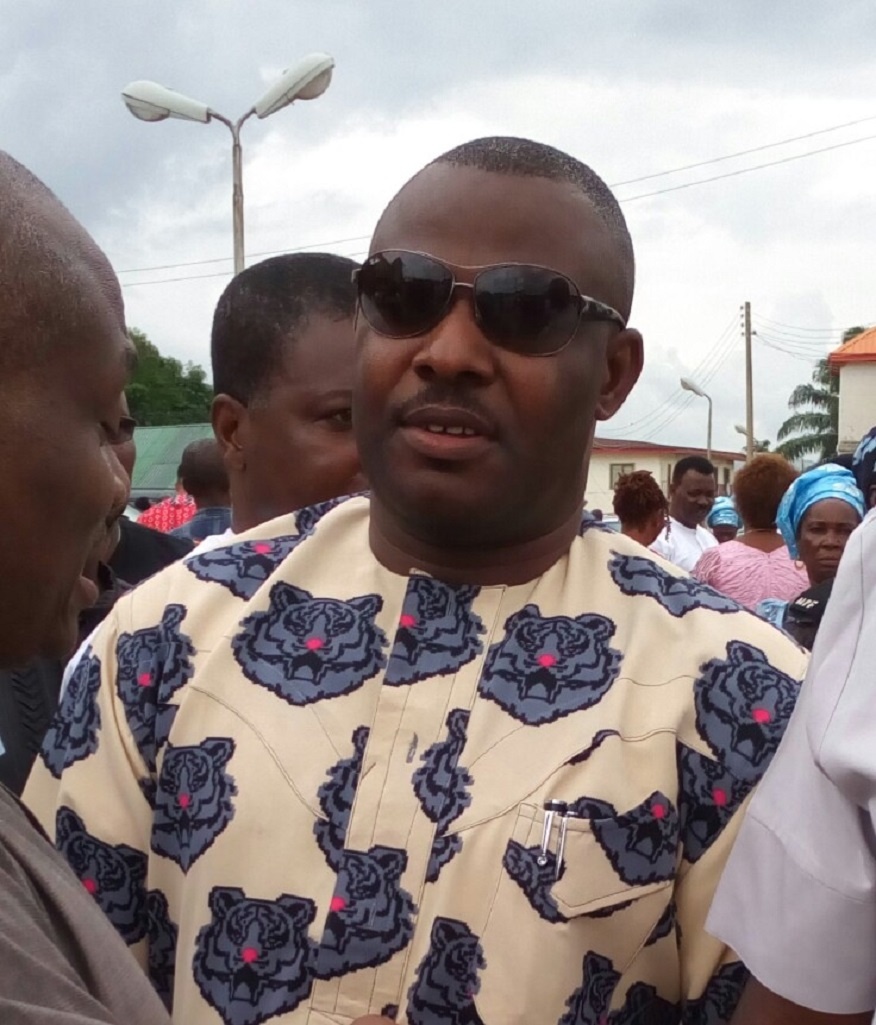 Last week, the Imo State branch of the National Union of Local Government Employees (NULGE), while addressing journalists in Owerri, called for the arrest and prosecution of the immediate past Deputy Governor of Imo State, Engr. Gerald Irona.

The group centred its call on what it described as alleged mismanagement of funds belonging to the Imo State Oil Producing Areas Development Commission (ISOPADEC).

Similarly, Special Adviser to the Governor of Imo State on Oil and Gas, Mr Goodluck Opiah, added his voice to the call by NULGE in the state.

According to him, “things started getting bad from 2011, and during the time of Mr Gerald Irona as the Deputy Governor, there was nothing to show from ISOPADEC because it became a conduit pipe for looting. It became a place to enrich themselves, cronies and families.”

Mr Opiah alleged that the commission started witnessing misappropriation of funds since 2011, noting that “it became worst during the tenure of Ihedioha who appointed his former deputy to head the place.”

I have been searching the books to see when the former Deputy Governor, Engr. Gerald Irona was appointed head of ISOPADEC and cannot see.

No records – past and present suggest same; or is this part of the political witch hunt? Should we just call a dog a bad name in order to hang it? If the former Speaker of the Imo State House of Assembly has advanced in age, one may have been tempted to consider his position as the product of senility.

I have also carefully studied the law establishing ISOPADEC but find no part thereof that suggests that the Deputy Governor of Imo State should head ISOPADEC.

From all indications, the NULGE press briefing was clearly sponsored, as part of a broader campaign, just to malign the person of the immediate past Deputy Governor. Who really is afraid of Mr Irona? Or, is this all about the 2023 elections?

By the way, what really does NULGE represent? What is Imo NULGE’s raison d’être, apart from the vow of its present leadership to sabotage the collective interests and abrogate the rights of Local Government workers in the state, for a fee.

When one considers that NULGE (national) is uniquely positioned as an umbrella organization that champions the cause, welfare and interest of all workers employed in local government areas in Nigeria, can anyone in all fairness rightly say that the Imo State branch of the union has not lost its way?

In Imo State today, Local Government workers are being owed several months of salary arrears, and still counting. Up till this moment, NULGE in the state has not said a word in defence or support of her beleaguered members, some of whom are dying of hunger.

The fate of our senior citizens that retired from the local government service is even more pitiable, with some of them owed arrears of pension ranging from four to six months, with no respite on the horizon.

Pensioners in the state have been protesting the non-payment of their entitlements. Many of them are dying of hunger, lack and disease, yet NULGE in the state has refused to say a word in solidarity.

At a period of dire stress, compounded by the COVID-19 pandemic, while majority of the local government employees in Imo State lament over government’s insensitivity and insincerity, a few of the members of the state executive of the NULGE continue to luxuriate in the patronage of some members of Imo state executive council, executing a range of hatchet jobs on their behalf, while showing zero remorse for the betrayal of the trust reposed in them by their hapless members. Is it not a case of slaves being in love with their chains?

Where on earth does a chicken take issue with the cooking pot, while carefully exculpating the knife that slit its throat? Should a labour union that ought to be fully focused on holding the government to account, while fighting for a better welfare package for her members; instead concern itself with receiving peanuts from the same government officials responsible for the impoverishment. How does Imo State NULGE’s current preoccupation differ from that of a receiver of blood money?

As we speak, available reports show that at least two different audit exercises have been conducted in ISOPADEC in the last four months with none indicting the administration of Chief Emeka Ihedioha.

Instead, it’s being reported, on good authority that the Ihedioha/Irona administration mainstreamed transparency in public service in the state. That enviable legacy is one of the touchstones that certain persons who are not friends of the citizens are struggling to tarnish, or ultimately destroy.

During that short period of that administration, communities in Ohaji/Egbema and Oguta that had been cut off from the national electric power grid for over 10 years were reconnected.

Some other communities that had never witnessed electricity since the creation of the world suddenly became drafted onto the power map, with quick-fire electrification projects commenced and underway in their areas.

The perennial security challenges in those same areas were equally addressed. Stakeholders in the oil-rich areas confessed that they never had it that good.

I recall vividly the exact words of former Commissioner representing Imo State on the Board of the Niger Delta Development Commission, His Royal Highness Eze Emmanuel Assor, during one of the former Deputy Governor’s consultative meetings with stakeholders on the electrification project of Awarra Court Area.

He said and I quote: “We are excited that we are no longer invited to meetings for, and over killings in our area. We are now invited to discuss developmental projects in our area.”

More so, practical steps were taken to ensure that thousands of youth from oil producing communities in the state were put on the path to attaining sustainable sources of livelihood.

This is unlike in the past, where ISOPADEC funds were diverted to private purses while phantom empowerment programmes were fervently promoted.

Meanwhile, an elaborate audit was conducted on the affairs of the Commission by the Hon. Ihedioha-led administration, which revealed colossal looting and mismanagement of the Commission’s finances. Incidentally, one of those calling for the head of Engr. Irona today was indicted in the audit report. This is a story for another day.

There is no doubt that the main sin of the former Deputy Governor, Engr. Gerald Irona is that he ensured that ISOPADEC funds were no longer shared by a few persons, but were used in working for the people of Oil Producing communities of the state. Sadly, ISOPADEC is back to the dark days.

Why is no one talking about it? Where is the forty percent (40%) of the state’s 13% allocation statutorily meant for ISOPADEC? Why is AUPCTRE, the staff union of ISOPADEC silent over this, or have they succeeded in cowing everyone? Or, did they hire NULGE to speak for them? What are the youth of the oil producing communities of the state doing? What of Ohaji/Egbema/Oguta/Oru West league of professionals?

Why has ISOPADEC’s Board not been constituted, five months into the life of the present administration in the State? Where is the One Hundred and Fourteen million (N114m) paid by Waltersmith Petroleum for the electrification of Awarra Court Area which the Ihedioha administration left in the United Bank for Africa – UBA Plc account of ISOPADEC? What about the over One Hundred and Eighty million (N180m) left in ISOPADEC account in UBA Plc by the Ihedioha administration? On the 14th of August 2020, the Governor Uzodinma-led administration in Imo State will be seven months old and Imo people will be able to compare between the present and the Ihedioha-led government in the state.

As Dietrich Bonhoeffer puts it, “silence in the face of evil is itself evil: God will not hold us guiltless.” Those who earn their livelihood fron suppressing the people are out once again, in typical fashion, to distract stakeholders with false claims, using a few persons that have no business whatsoever with ISOPADEC. Every true patriot must speak out at this point. We must refuse to be distracted, but ask questions about why ISOPADEC funds are no longer used in working for the people. Staff of the Commission are owed for about four months now, yet, the Commission’s funds that run into billions cannot be accounted for. Who, really is a friend of the people, bearing in mind that while the Emeka Ihedioha-led administration was in place, Imo workers, including those of ISOPADEC were paid regularly?

As for NULGE, there is no doubt that the union’s present leadership in the state is a complete disaster. They have betrayed the confidence reposed in them.

They have completely derailed and have no business remaining in office as representatives of local government employees in the state. Their best bet is to resign from service and join the ruling All Progressives Congress in the state, instead of masquerading as union leaders.

More so, both the individuals that authored, and those acting the anti-Irona script must realize that no one has monopoly of mischief making. We are presently studying previous reports on ISOPADEC, including those covering the era 2007 to 2011 and will make our findings known soon.

A word is enough for the wise!

Dr Walter Duru is a Communication expert and a Public Affairs analyst. He can be reached on: walterchike@gmail.com

Related Topics:Gerald Irona
Up Next

E-commerce’s Contribution to Nigeria Economy, the Challenges and Need for Government Intervention

Some Tools for the Job in Hand