The Multi-Billion Naira Water Reticulation Project in Ilorin: A Scam?

Water is a necessity for life and it is the responsibility of every responsible government to give priority to provision of good water. The unmatchable importance of hygienic water to human survival has triggered the consciousness of some international organisations to flag off different water provision programs for developing countries including Nigeria.

Sobi barrack, Gambari, Aiyegbami, Madinat and some other areas of Ilorin. Agba dam, which is a lake, can only supply water to about 15% of Ilorin metropolis during rainy season while it would depend on Asa dam during dry season to effectively supply water around its circus. Though the pump to make that achievable had been procured for over 4 years, but it can’t be ascertained if the pump has been put in use as at this moment. All these show that there are enough water sources in Ilorin, and there is no need for government to make water source as an excuse.

Ilorin water reticulation project, which is meant to make water available to the nooks and crannies of Ilorin metropolis, is one of the major projects inherited by the current administration of Alhaji Abdulfatai Ahmed from his predecessor, Dr. Abubakar Bukola Saraki.

It involves water distribution network that will provide water routes to the consumers after it has been collected and treated. Being the capital city of Kwara state, Ilorin continues to expand on daily basis and the need to expand the water radius becomes very inevitable.

When completed, the project is expected to increase the coverage of potable water distribution infrastructure in Ilorin metropolis.

The project started in year 2009 and has remained one of the most controversial projects since that time. It has gulped several billions of naira since almost a decade that it commenced but it’s sad that the light has not been sighted at any end of the tunnel.

The general public may wish to be reminded of a publication in Vanguard Newspaper dated October 7, 2014 that reported Mr Yomi Ogunsola, who was the Senior Special Assistant to Governor Abdulfatah Ahmed on Investment Promotion and Strategy, to have said in an interview with News Agency of Nigeria that Ilorin water reticulation project cost is N7.2 billion.

He also disclosed in the same interview that the state government had earlier spent more than N5.2 billion on the project. Interestingly, he boastfully disclosed that the project was at 98% completion stage as at that time.

In a statement published by Ilorin.Info on January 10, 2018, Barrister Abdulrazaq Akorede who is the state Commissioner for Water Resources, was quoted to have said that with the level of work done so far as at that time, the project would be completed by May or June, 2018. He also disclosed the ongoing interventions on some water projects across the state and lamented the destruction of some water project facilities by some vandals.

On February 2, 2018, the Kwara state government, through her official website, disclosed that she is set to commence the testing of the Ilorin Metropolis Water works following the completion of the reticulation project.

Moreover, the Governor approved the diversion of water mains to the Western reservoir and other overhead tanks that supply water to 50% of Ilorin due to some ongoing projects in the state.

In a statement published by National Accord Newspaper on April 18, 2018, the General Manager of the State Water Corporation, Alhaji Tunde Yahaya, was specific in his disclosure that the Primary phase of the Water Reticulation project had been completed, and conducted Journalists around the 5 water works in Ilorin metropolis.

He also disclosed that the tertiary phase of the reticulation project, which involves laying of pipes into street and homes and repair of damaged pipes, had been captured in the 2018 budget and will soon be commenced.

In a statement published by Ilorin.Info on June 1, 2018, Governor Abdulfatai Ahmed made the following interesting revelations in an interactive session with journalists on May 31, 2018.

First, N8 billion has been committed to the Ilorin water reticulation project in the last 7 years to tackle the problems of water supply in the state.

Second, the project was categorised into 3 sections: primary, secondary and tertiary.

Third, the primary section has been completed, while the remaining secondary and tertiary sections will soon be completed.

Fourth, his administration had renovated about 17 water works across the state.

Fifth, his administration had provided boreholes to over 400 communities in the state.

We wish to remind the public that sometimes in 2014 (5 years after the project commenced), the then Senior Special Assistant (SSA) to Governor Abdulfatai Ahmed on Investment Promotion and Strategy, Mr Yomi Ogunsola, explained that “the state government had earlier spent more than N5.2 billion on the project and the project was at 98 per cent completion stage while the water pipes would be connected to the water mains soon”.

It would also be of great interest to let the public have little idea of billions of naira that had been committed to water project (including Ilorin water reticulation) in the state since 2009.

In 2009, N6.79 billion was spent on water project. Out of this sum, N4 billion was gotten from the N17 billion bonds that the state sold in year 2009 by the state Governor as at that time, Dr Abubakar Bukola Saraki for Ilorin water distribution project and Asa dam mixed use development.

Specifically, a sum of 2 billion naira was committed directly to the water reticulation project).

Effort to get the total funds expended on water project could not be ascertained as at this moment but the estimate has it to be about N1.2 billion).

In conclusion, as a Civil Society Organisation occupying the highest office in the society (office of the Citizens) and advocating for open leadership and good governance in Kwara state, the salient questions ENetSuD wants the government to answer are:

Despite the billions of tax-payers monies spent on water projects (including water reticulation), where is the water?

Since 2014 that 98% completion was achieved, funds have been annually allocated and released for the water reticulation project. Why has the remaining 2% of the project not been completed since 2014 to ensure citizens’ access to good water and provide value for all our billions of naira spent so far since 2009?

Since N8 billion committed on the project in the last 7 years is more than the total project cost of 7.2 billion naira, why has only the primary phase been completed so far?

Now that the secondary and tertiary phases have been included in the recently approved 2018 budget, how much is the government planning to spend on these phases? Are these phases part of the remaining 2% completion as at 2014?

When will the secondary and tertiary phases of the water reticulation project captured in the 2018 budget be completed?

This article was written by Dr Abdullateef I. Alagbonsi, ACPA, Ph.D. He is also the Coordinator of www.ENETSUD.ORG He can be reached on info@enetsud.org. 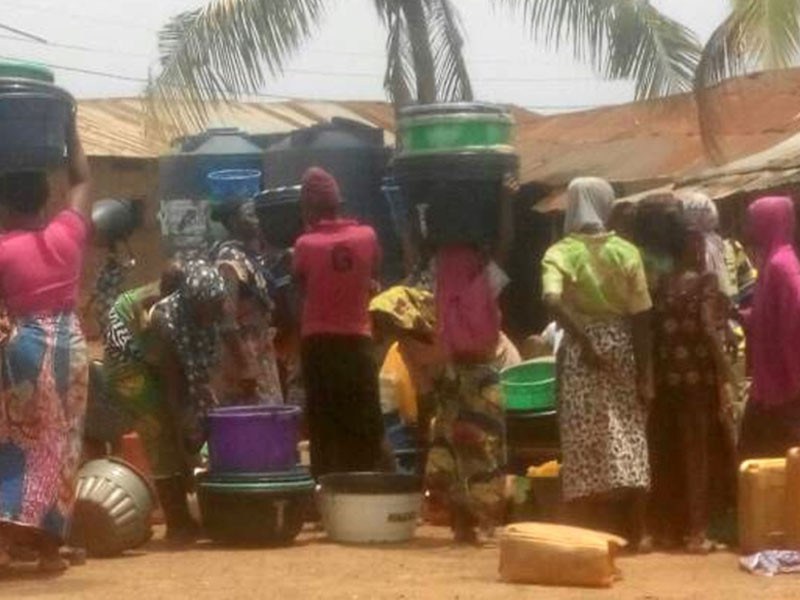