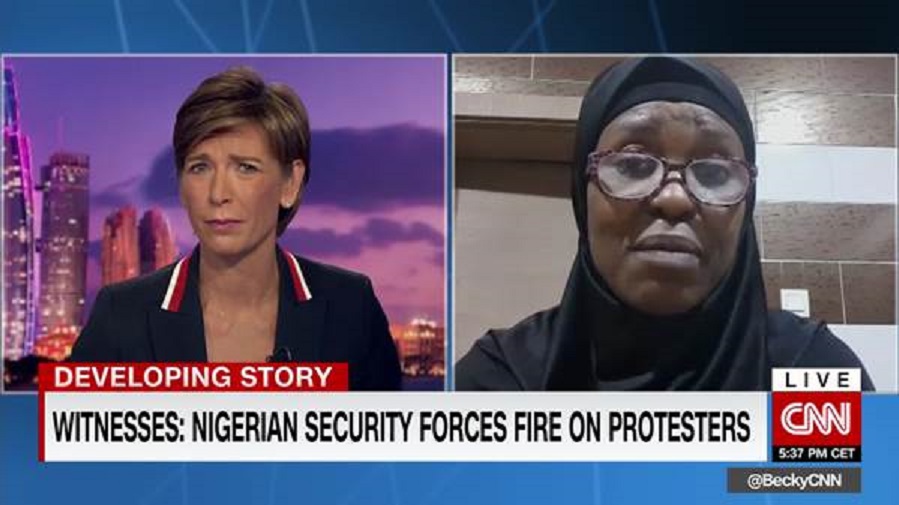 Nigerian activist, Aisha Yesufu, has described the last Tuesday’s attack on #EndSARS protesters in Lagos as an “absolute horror” which has left her “numb.”

In a chat with CNN’s Becky Anderson after the unfortunate shooting allegedly carried out by men of the Nigerian Army, she said the demonstrators were only asking the government to give them police they can trust and be proud of like their colleagues in civilised nations.

According to her, there is a “culture of impunity” among the Nigerian police and the youths were just asking the government to reform the police, nothing more.

However, she expressed disdain that this humble request was met with a violent suppression from the government, which is yet to take responsibility for the shooting.

A day after the shooting of live bullets at the peaceful protesters at the Lekki Toll Gate, Governor of Lagos State, Mr Babajide Sanwo-Olu, claimed he was not aware of the use of the military to disperse the youths after he declared a curfew in the state, insinuating that this may have been done by some “forces beyond our direct control.”

On Thursday night, President Muhammadu Buhari addressed the nation on the unrest that engulfed the nation after the shooting but he did not specifically mention the Lekki incident but described the youths as “so called protesters.”

The next day, on Politics Today programme aired on Channels TV and monitored by Business Post, one of the President’s media aides, Mr Femi Adesina, claimed that Mr Buhari did not speak on the incident because it was still being investigated by the state government.

“I can’t believe that our military men turned roulettes on our citizens, and the government decided to hurt young adults – our youth who came out and in peace just to say that they want a right to live. And by coming out they have been killed, and it’s just horror that I am feeling right now,” Yesufu, who helped organize the ‘Bring Back Our Girls’ movement, told CNN.

“The police will waste you, they will kill you and nothing will happen to them. They will even tell you the President will not be able to do anything. And indeed we have seen this with the youth who are constantly being profiled, who are being killed and who are being maimed, who are being escorted from coming out to make demands of the president and to say to him, stop this killing,” she added.

“We are asking them to stop killing the Nigerian people. It’s a crime against humanity. Genocide is happening right now and the world must not look away,” Yesufu, who is one of the iconic faces of the #EndSARS protest, said.

TVC Back on Air After Attack by Hoodlums