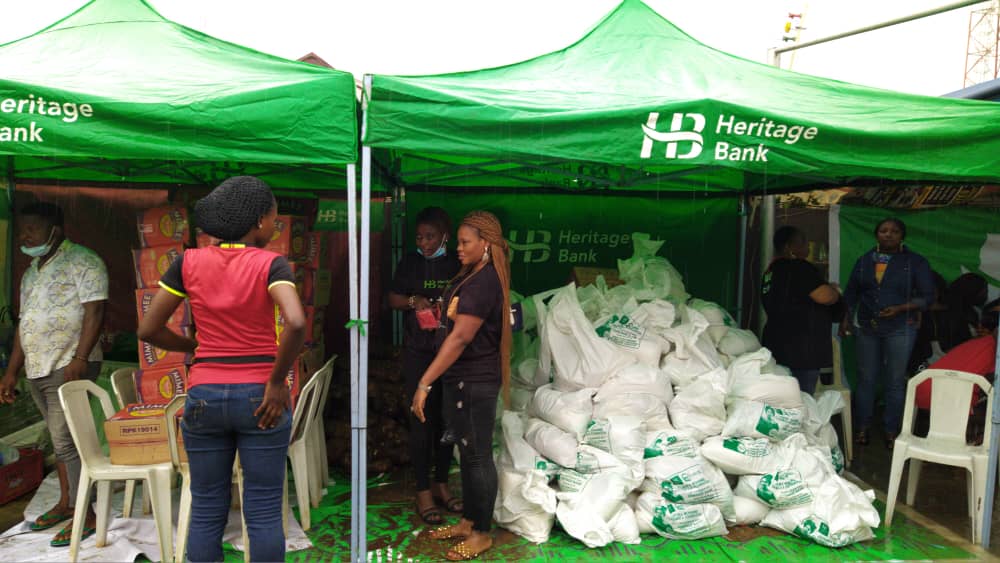 For about six months, schools in Nigeria have remained closed because of the government’s efforts to control the spread of Coronavirus disease in the country.

Since the education sector was shut down in March 2020, some private school teachers have not received salaries from their employers and this has made life very difficult for them.

In an effort to cushion the effects of this, Heritage Bank Plc has partnered with a Lagos politician, Mrs Fatima Mohammed, through her Fatima Mohammed (FAMO) foundation, to empower over 300 private school teachers and small-medium enterprises (SMEs).

The beneficiaries were picked in 15 local governments; including five major markets in Ojokoro Local Council Development Area of Ifako Ijaiye, in Lagos State and presented with some food items and the sum of N10,000 at the weekend.

According to her, Heritage Bank deemed it necessary to partner FAMO to champion the corporate social responsibility of the bank in supporting private school teachers and small businesses out of hardship and the quagmire plunged into nationwide by the pandemic.

She further explained to journalists that Heritage Bank and the Foundation seek to help teachers in phases.

On the mode of selection adopted, she stated that FAMO selected the teachers based on the regions, as the first phase comprised 300 teachers and SMEs in the South West (Lagos) through the help of National Association of Private School Teachers (NAPST), which identified those teachers in direst need of the assistance.

She, however, disclosed Heritage Bank’s strategy to provide basic palliative care to the educational system at the resumption of academic activities in schools.

According to her, the bank has three areas of basic supports in providing mentorship program for schools, school portal and school health plan in partnership with Health Maintenance Organisations (HMOs).

She further explained that support programs churned out by the bank are designed to instil value and keep students focused on making the best of their lives through corporate models, help school authorities to manage operations and steer them into moving the educational system to the new digital era; where teachers can use technology in classroom management, administration, engagement with parents.

For the school health plan, Dan-Egwu hinted Heritage Bank would help to provide a very affordable health plan to ensure that every member of the school community is covered medically, as this will reduce the anxiety amongst teachers, parents and school authorities.

In her address, the convener of FAMO, Mrs Mohammed, commended Heritage Bank for its bold steps in joining hand-in-hand to support the challenged private school teachers, SMEs sectors and the roles the bank plays in championing CSR in the country.

The female politician stated that the primary aim was basically to cushion the effect of poverty especially as it concerns the private school teachers.

“The private school teachers because of the pandemic haven’t been paid for 6months and there are a lot of such cases around here. Ifako-Ijaye is the second-largest LGA in Lagos State; therefore, it is time to reach out to the people.

“During the pandemic, we have reached out to them about 2 to 3 times. I reached out to Heritage Bank and they heard my voice just to partner with us with my palliative team just to cushion the effect,” she said.

Meanwhile, for the SME owners, she further stated that additional plans have been agreed upon with the Agency Banking Unit of Heritage Bank to empower them to function as agents in this space.

She also commended Heritage Bank as a youth-friendly bank for their numerous supports to young Nigerians in helping to promote their businesses and dreams.