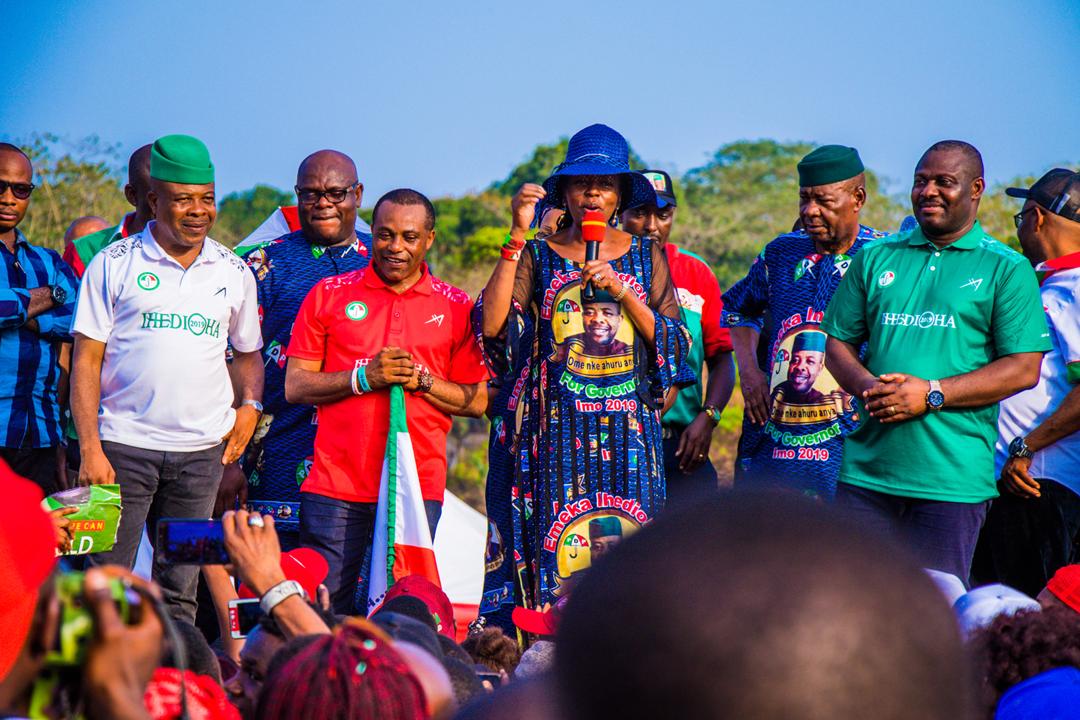 Former Deputy Speaker of the House of Representatives and Imo State governorship candidate of the Peoples Democratic Party (PDP), Mr Emeka Ihedioha, has promised to ensure that local governments in the state enjoy full autonomy, if elected Governor of the state.

Mr Ihedioha made this pledge at the weekend during a Town Hall meeting with stakeholders of Oguta Local Government Area of Imo State, at Oguta Civic Center.

He also vowed at the event to ensure that the law establishing the Imo State Oil Producing Areas Development Commission (ISOPADEC) is vigorously implemented.

The former lawmaker expressed concern over the perennial problem of electricity in the Oil-rich Local government, promising to fix it if voted into power.

Speaking on his Oguta-born deputy governorship candidate, Mr Gerald Irona, the former deputy speaker reiterated his confidence in him, describing him as his ideal Deputy Governor.

Mr Ihedioha, who described his visit to Oguta as akin to a home coming, promised to take advantage of the tourism and agricultural potentials of the area to develop it.

“I appreciate the deluge of problems you have identified. It is one of the reasons I nominated your brother- Irona as my Deputy. He is very conversant with all the issues. I have seen in Irona a young man that understands what loyalty, dedication and hard work is. That is the kind of man I want as Deputy Governor.

“We shall implement the FOI Act. We shall send an Executive Bill to the state Assembly to ensure that Local Government Councils enjoy autonomy. We shall have a Peoples Parliament, made up of non-state actors to enhance accountability and equity in the distribution of the people’s wealth.

“We shall dialogue with the oil companies. We shall bring FG to complete the NIPP Plant in Egbema and other power projects in Imo. We shall solve the problem of electricity. We understand what needs to be done. We have the contacts. We have the capacity to do this. We shall build good quality roads. We shall ensure that the law establishing the Imo State Oil Producing Areas Development Commission-ISOPADEC is implemented.”

Speaking earlier, Mr Irona promised not to disappoint the people, describing Mr Ihedioha as an age-long friend of Oguta people, who used his position as Deputy Speaker of the House of Representatives to support the development of the area.

He further used the occasion to thank Senator Francis Arthur Nzeribe for what he described as his inspirational leadership and prayed God to continue to be with him.

“Oguta and Ohaji/Egbema are the coastal LGAs in Imo; the two LGAs that qualified Imo to be in NDDC. I have engaged my principal- Hon. Ihedioha. He has given me an assurance that he will abide by the spirit and letters of the ISOPADEC law.”

Also speaking, Imo State Chairman of the PDP, Mr Charles Ezekwem, expressed the readiness of the PDP to take over power in the state, promising good governance.

He cautioned people of the area to resist the temptation of selling their votes, assuring them that the Local Government will have so much to benefit from a PDP administration in 2019.

Speaking earlier, a community leader in the area, Professor Ike Azogu outlined the problems of the people of the local government, urging them to address them when they assume office.

Highpoints of the visit were a rally at the Trinity High School, Oguta, attended by over fifteen thousand people, courtesy call on the Traditional Ruler of Oguta, His Royal Highness, Chinedu Nzeribe, Igwe of Oguta, speeches, presentation of flags of victory to: Orlu Senatorial candidate of the PDP, Hon. Jones Onyereri, Barr. Obed Acholonu, candidate for House of Representatives for Oguta/Ohaji/Egbema and Oru West Federal Constituency and Frank Ugboma, House of Assembly candidate for Oguta State Constituency.

The Town Hall event was attended by very important dignitaries, among whom are: former Vice Chancellor of Federal University of Technology, Owerri, Professor Jude Njoku, former Minister, Viola Onwuliri, former Deputy Governor of Imo State, Dr. Douglas Acholonu, community leaders from all the communities in Oguta LGA, members of Civil Society, among others.

Related Topics:Oguta Rally
Up Next

Delta 2019: It’s Time for Ogboru to be Governor–Uduaghan