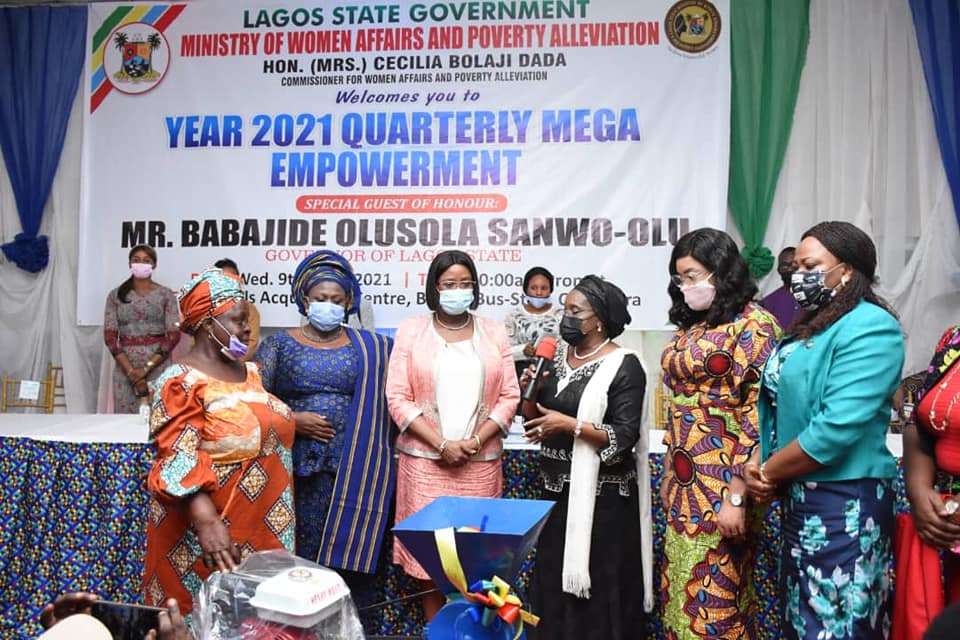 As part of efforts to empower its residents, the Lagos State government has distributed various empowerment tools to 1,000 persons.

The distribution was done by the Ministry of Women and Poverty Alleviation (WAPA) and the beneficiaries were mainly vulnerable women and indigent residents in the state.

Some of the items shared with the aim to reduce poverty in the metropolis included grinding/milling machines, sewing/whipping machines, hairdressing appliances, sterilising sets, popcorn production machine, generators and android phones for digital marketing.

At the distribution on Wednesday, the Lagos State Governor, Mr Babajide Sanwo-Olu, who was represented by Secretary to the State Government (SSG), Mrs Folashade Sherifat Jaji, explained that the gesture was in line with his administration’s objective to alleviate poverty, through the implementation of empowerment programmes targeted at women and other vulnerable groups in society.

He expressed optimism that the items will help immensely in overcoming the effect of the current harsh economic realities occasioned by the COVID-19 pandemic and other factors in the state.

“This programme was initially held once a year, but we have increased it to four times in a year. This is because we want to increase the number of beneficiaries.

“With the empowerment programme, we have been able to positively impact the lives of our women, who have become economically productive with the resultant improvement in their quality of lives and that of their families,” he said.

Mr Sanwo-Olu urged the beneficiaries to make judicious use of the resources made available to them with taxpayers money, noting that the motive was to make them economically and financially independent.

“As a government, we will continue to give our support to initiatives aimed at developing the human capacity, innovation and entrepreneurial skills.

“We shall continue to improve the capacity of our vocational skills acquisition centres to impact relevant skills on a current and emerging economic environment,” the Governor said.

Governor Sanwo-Olu advised that young women should take advantage of the tuition-free vocational training programmes to learn skills that will give them opportunities of becoming entrepreneurs and employers of labour in the nearest future, irrespective of their academic qualifications.

“I assure you all that the State government will continue to give you its support through supplies of empowerment tools to boost your businesses,” he said.

On her part, the Commissioner for Women Affairs and Poverty Alleviation, Mrs Bolaji Dada, stated that the empowerment initiative serves as a means of improving the political, social, economic and health status of Lagos residents, stressing that the programme was also essential for the achievement of a sustainable development order within the state.

“Beneficiaries of today’s programme are indigents, vulnerable residents, graduates and widows, whom fate had rendered financially incapacitated across the 20 Local Government and 37 Local Council Development Areas of Lagos State.

“As a Ministry created to oversee women affairs, we see a mirage of problems presented by various case studies on a daily basis.

“Evidently, our indigent residents especially women, need so much support to carry out a multidimensional role often requiring empowerment for effective execution,” the Commissioner said.

NIPOST, NDLEA to Tackle Use of Logistics Firms to Move Drugs, Weapons