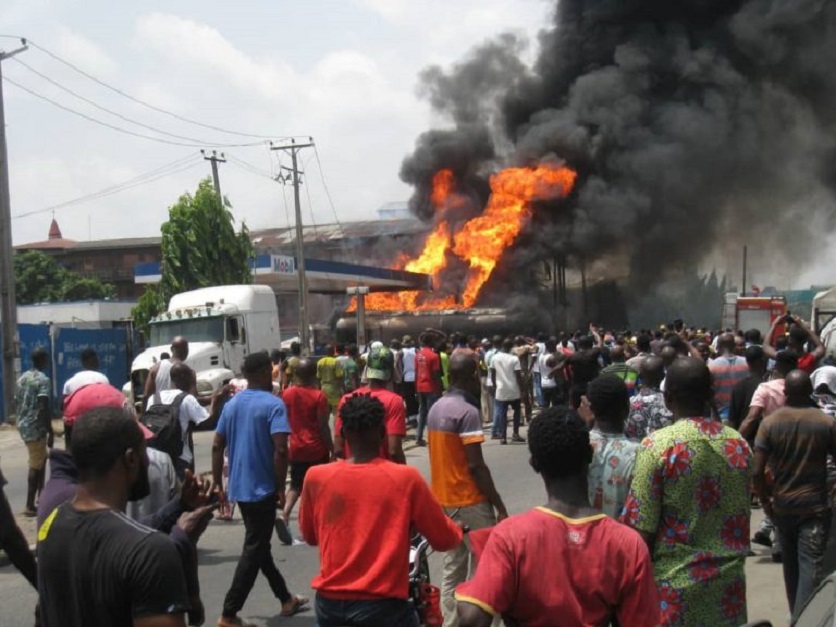 The Lagos State Fire and Rescue Service has disclosed that it received it recently received no fewer than 17 fire outbreak calls from residents of the metropolis.

In a statement issued on Monday, the agency, which described this as alarming, warned members of the general public, particularly motorists, to desist from indiscriminate storage of Premium Motor Spirit (PMS), otherwise known as petrol, in inappropriate places.

Fuel queues have resurfaced in the state since last week, and at the moment, the product is sold in jerry cans along the road. This has also caused some consumers to embark on panic buying, with the products stored in resident areas.

But the head of the Lagos state fire service, Mrs Margaret Adeseye, has cautioned members of the public to be cautious, noting that the state has so far recorded 129 emergency calls on fire outbreaks in November, with 17 calls received in a day recently.

She noted that since the commencement of the recent fuel scarcity, some people had devised illegal means of storing the product in unsuitable places, such as in vehicles, under staircases at home or within the premises of their working places, stressing that all these have contributed to the increase in the number of fire outbreaks.

Mrs Adeseye reiterated that the state government places a high premium on the safety of the lives and properties of the citizenry; therefore, the nonchalant attitude of the general public to the basic principle of safety is of great concern to the present administration as the total number of emergency calls in November is already much higher than the 82 recorded in October 2022.

“The high figure of 129 fire outbreaks in less than a month is worrisome. However, we are extending our safety enlightenment campaigns to all local government areas, hospitals, schools and the grassroots, all in an effort to curb the tide of fire incidents and related emergencies,” she stated.

According to her, fuel scarcity is not an excuse for the inappropriate storage of fuel to the detriment of the lives and properties of residents, imploring members of the public to avoid using jerry cans that have been used for petrol to store kerosene and any other flammable liquids. She also advised motorists, particularly commercial vehicle operators, not to store petrol in the boots of their cars and buses.

The firefighter urged landlords and tenants to be observant and prevent inappropriate storage of fuel in and around their homes while enjoining operators of filling stations to stop the practice of dispensing fuel in polythene bags while allowing customers to cluster around petrol dispensing pumps to avoid scuffle that can lead to fire outbreaks.

Mrs Adeseye, therefore, urged residents to call the toll-free emergency numbers 767 or 112 or the Lagos Fire Service Hotline: 08033235891 to report an outbreak of fire for a prompt response.