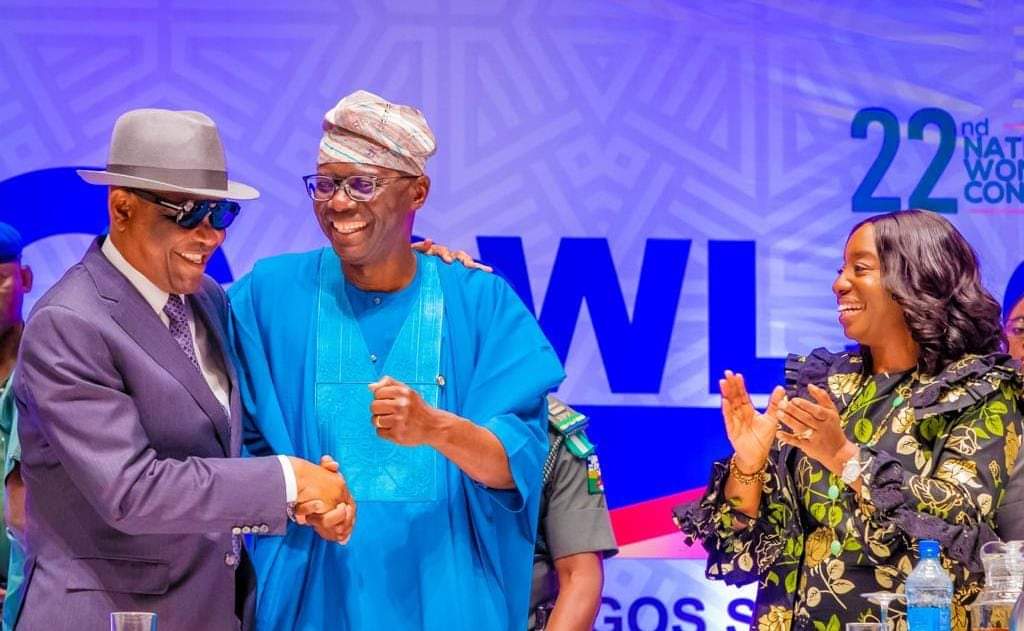 Governor Nyesom Wike of Rivers State has thrown his weight behind the candidate of the All Progressives Congress (APC) in the 2023 governorship election in Lagos State, Mr Babajide Sanwo-Olu, snubbing the candidate of his party, the Peoples Democratic Party (PDP), Mr Jide Adediran, otherwise known as Jandor.

Mr Wike, who was in Lagos on Tuesday for the 22nd National Women’s Conference organised by the Committee of Wives of Lagos State Officials (COWLSO), said any party contesting against the APC in the commercial capital of Nigeria was wasting its time.

The Rivers Governor had been at loggerheads with the leadership of the PDP over the decision of the Chairman of the party, Mr Iyorchia Ayu, to remain in office after the emergence of Mr Atiku Abubakar as the presidential candidate for next year’s poll.

He had contested the slot with the former Vice President but lost.

At the event today themed Spring Forth, Stand Out, Mr Wike said Governor Sanwo-Olu has raised the bar in governance, endorsing him for another term in office.

The Rivers State Governor said he had no regrets for openly endorsing Mr Sanwo-Olu, stressing that his endorsement of his Lagos colleague was borne out of his personal conviction about good governance.

“If Sanwo-Olu is not doing (well), even if he belongs to my party, I will not come here. If you belong to my party and you are not doing well in governance, you won’t see me.

“If you don’t belong to my party and you are doing well, you will see me. Good governance is what I stand for. I will not regret to say that I am in support of you (Sanwo-Olu) for second term. Others should not waste their time,” he said.

“Look at the kind of project coming from this women’s group. Why would any reasonable person not support the Government that is encouraging this?

“Let’s also look at the kind of physical infrastructure being delivered in Lagos. This confirms Lagos as a State of excellence. There are some people who will come here; instead of them to continue to make Lagos improve, they will bring Lagos down. For me, I’m satisfied with what Sanwo-Olu has done, and it doesn’t matter the party he belongs to,” he added.

In his response, Mr Sanwo-Olu described Mr Wike’s endorsement as another example of “politics without bitterness,” saying Lagos and Rivers States had learnt from each other in terms of projects and development, adding that both states would continue to cooperate on shared interest.

“There is no better person that is fit as a guest speaker at the conference other than the hardworking Governor Wike of Rivers State. We brought him here to share in his experience and also for him to see what we are doing in Lagos.

“We are encouraging collaboration without bitterness and without talking about our parties or political differences. If you are doing well, it doesn’t matter where you belong. We should encourage peer review across parties. Gov. Wike had invited me to Rivers for projects’ commissioning in the past. We have challenged ourselves in a positive way; this is good for the growth of our politics and the nation,” he said.

Related Topics:Sanwo-OluwikeWike Endorses Sanwo-Olu
Up Next