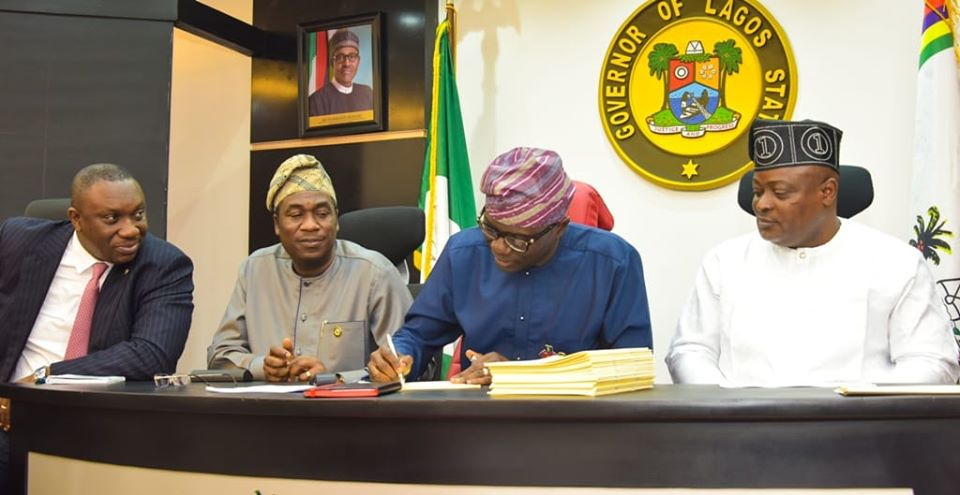 Governor Babajide Sanwo-Olu of Lagos State has assured residents of the metropolis that his administration will be open and accountable in the implementation of the 2020 budget.

On Tuesday, at a short ceremony in Ikeja, Mr Sanwo-Olu signed the N1.168 trillion 2020 Appropriation Bill into law in the presence of his team and members of the state parliament.

Speaking, the Governor said, “Now is the time for members of the state’s executive council who will be implementing this budget to demonstrate their tenacity to the vision of achieving Lagos of our dreams. We must display the conviction that we can do the job given to us by all residents of Lagos.”

“With the speedy passage of the budget, the responsibilities cut out for us have gained additional momentum and the effort to achieve our development agenda has just started, because this is first budget this administration will be implementing in full cycle. We are hopeful that we would have improved the quality of life of residents at the end of the budget year,” he added.

The Governor further pledged that his government would deploy the state’s resources responsibly to ensure the budget is implemented up to about 100 per cent performance, praising members of the assembly for accelerated passage of the budget, saying the legislators, by their action, aligned themselves with the overall interest of residents.

“The happiness of the speedy passage of the budget is not for all of us in government, but for all the 22 million Lagosians on whose behalf we act and take the decision to make the state habitable and developed.

“When we fix the road, when we make the drainage flow better, when we turn around the services of our hospitals for good, when we ensure Lagos becomes a choice destination for investments and tourism, when we fully implement the budget, we would have given the people the voice to express their happiness,” he said.

Speaker of the Lagos State House of Assembly, Mr Mudashiru Obasa, hailed the Governor and his team for timely transmission of the budget to the House for legislative scrutiny.

He noted that the parliament was thorough in the process of scrutinising the budget, adding that the House did not substantially cut down the expenses contained in the original document, because “the budget cuts across all sectors of the state’s economy”.

Mr Obasa pleaded with members of the executive to leave no stone unturned in the implementation of the budget, saying the expenditure must touch the lives of the people.

Chairman of the House Committee on Appropriation, Mr Gbolahan Yishawu, said members worked round the clock to ensure the budget was passed in line with the directive of the Speaker.

“During the budget defence, members of the cabinet were cooperative and provided required insights that led to the speedy completion of the work. The details of the budget spoke heart of the Governor’s development agenda,” the lawmaker said.

Commissioner for Economic Planning and Budget, Mr Sam Egube, observed that speedy passage of the budget was not without challenges and disagreements, but said the acceleration of the process indicated “cooperation and smooth working relationship” between the executive and the legislature.

Related Topics:Lagos signs 2020 budget
Up Next