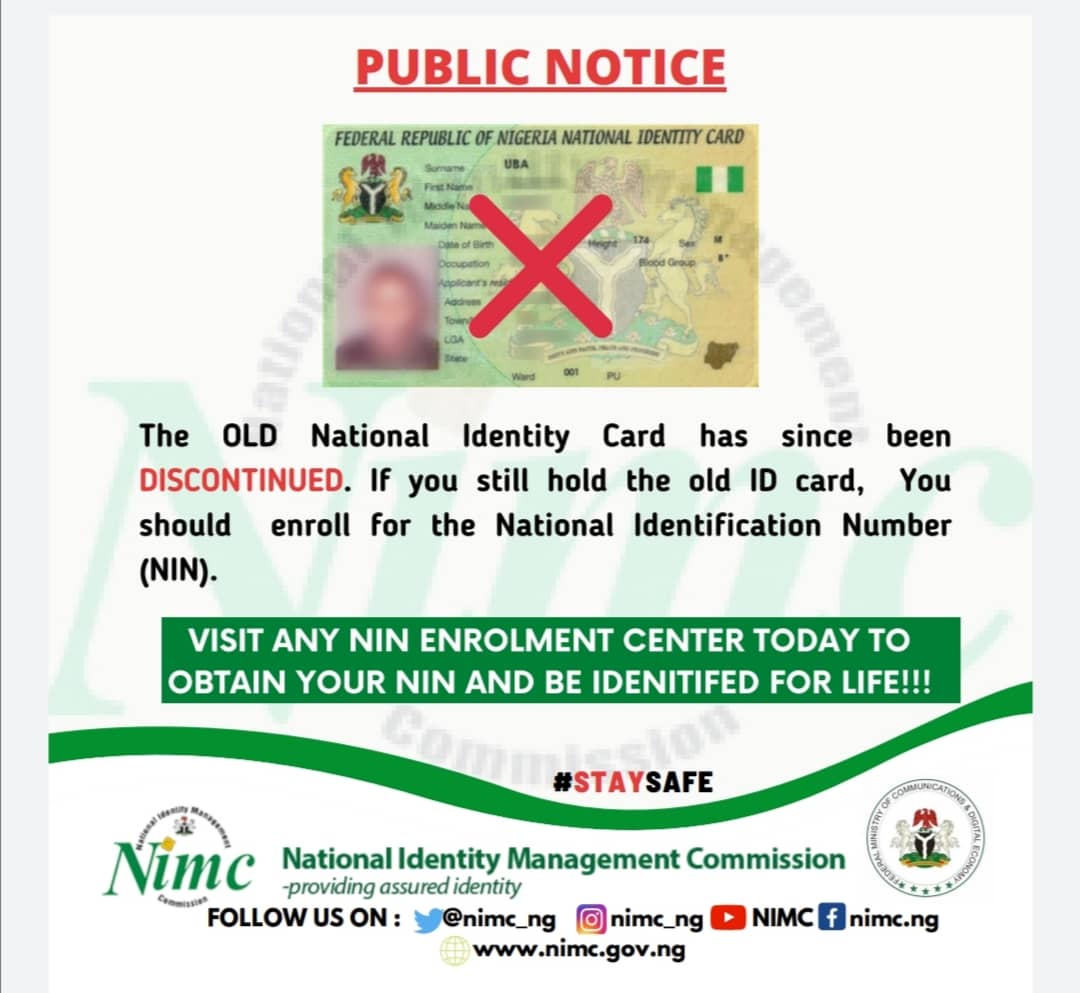 The National Identity Management Commission (NIMC) has announced the discontinuation of the old national identity card.

The agency confirmed this new development in a post on Wednesday, advising citizens with the old number embedded in the first issued national ID card to visit any of its offices nationwide for another one.

According to NIMC, the old number cannot be used to update the registration records of subscribers with telecommunications service providers as directed by the National Communications Commission (NCC).

On December 15, 2020, the regulatory agency for the telco sector had directed that any subscriber that fails to synchronise his/her SIM card(s) with the National Identification Number (NIN) on or before December 30, 2020, should be disconnected.

After a public outcry, the exercise was extended to January 19 and then to February 9, 2021.

But as the deadline draws closer, NIMC said those with the old ID number would be unable to link their SIM cards with the NIN because it is invalid.

Some subscribers had said they submitted the old number but was not rejected. However, Business Post gathered that after the number of the NIN, the telcos will still have to forward them to the federal agency for verification and linking if valid.

For those with the old number, this may be their fate and in order not to be caught napping, NIMC has advised them to upgrade the number.

“The old national identity card has since been discontinued. If you still hold the old ID card, you should enrol for the National Identity Number (NIN).

“Visit any NIN enrolment centre today to obtain your NIN and be identify for life,” the notice on the official handle of NIMC on Twitter read.

Commenting on the post, some concerned citizens expressed their displeasure over the handling of the registration process by the agency and the federal government, especially in the aspect of exposure of the vulnerable to COVID-19 because of the crowd at the NIMC offices.

“If you all have disconnected the old nin number, are you expecting people like my grandma who is old and frail and vulnerable to COVID-19 to come to the crowded centres to stands for hours just to register her name then be sent back home? @Zulu_EmpressTee queried.

“Common on, what is this? You mean you are going to subject those old folks that went through difficulty to get this card done then, to this present inhumane hurdles of getting the new NIN? Naija una matter na lost case,” another Nigeria identified as Adebayo Rilwan posted.

Replying to the commission, a Twitter handle @NnajiCemeka, wrote, “Have you all not noticed that no Nigeria owned social media is interactive? They don’t respond to questions because we were not expected to ask questions but to obey orders”

The national ID card provides a verifiable means of identifying citizens and creates a comprehensive database for providing public services.