One Dead, 15 Rescued as Building Collapses in Lagos 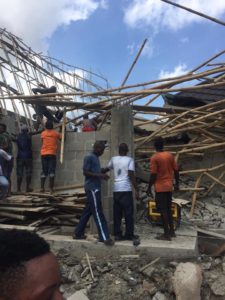 At least one person has been confirmed dead when a building caved in on Thursday afternoon in Ilasamaja area of Lagos State.

Reports say no fewer than 15 persons have been pulled out from the rumble by different agencies carrying out rescue operations at the scene.

Eyewitnesses say the 3-storey building still under construction collapsed at about 2.57pm today.

It was learnt that the property, located on Abimbola Street in Ilasa, was earlier marked for demolition by state government officials, but works allegedly resumed at the site later on.

As at Thursday night, rescue operations were still ongoing with some of the construction workers still trapped under the debris.