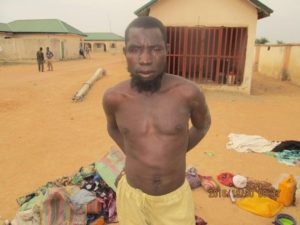 A suspected Boko Haram drug supplier, Mr Kadiri Umate, has been arrested by troops of Operation LAFIYA DOLE on patrol from Bama to Pulka.

Mr Umate was intercepted with some drugs and other logistics at the Firgi and Zawan axis in Bama Local Governmnet Area of Borno State.

Reports say the suspect was apprehended while attempting to cross into Sambisa forest, Boko Haram stronghold in Borno on Sunday afternoon.

The troops pursued him and others, but he was unlucky as the soldiers grabbed him before he could escape.

In a related development, a suspected Boko Haram terrorists’ logistics and fuel supplier, Mr Fantoma Lasani was arrested by troops in conjunction with Civilian JTF at Muna garage when he came to pick his wife to finally relocate out of Maiduguri.

The suspect who hailed from Flatari village, Bama Local Government Area, is among some unpatriotic elements in the society that had been supplying Boko Haram terrorists with Premium Motor Spirit and Automotive Gas Oil in Bama, Gwoza and Sambisa general area.