It seems to be more trouble for Alabama Senate candidate, Mr Roy Moore, who is battling hard to clear his name of allegations bordering on sèxual assault.

One Mrs Beverly Nelson is the latest woman to openly accuse the Republican of sèxually assaulting her while she was 16 in the 1970s.

According to Mrs Nelson, Mr Moore allegedly tried to force himself on her after offering a ride home from her job as a waitress.

She said, “I tried to fight him off while yelling at him to stop, but he locked his car to prevent my escape.”

However, the 70-year old politician denied the allegations, emphasising that he doesn’t even know the woman or the restaurant she claimed to have met him. He described the allegations as pure witch hunt.

Mrs Nelson’s accusation on Monday comes after four other women detailed allegations of sèxual assault by the conservative firebrand while they were teenagers in Alabama.

The 56-year-old said she met Mr Moore at the Olde Hickory House restaurant in Gadsen, Alabama, where she worked as a waitress while she was a teenager.

She claimed Mr Moore, a 30-year-old deputy district attorney at the time, offered to sign her high school yearbook and wrote: “To a sweeter more beautiful girl I could not say Merry Christmas.”

He signed it “Love, Roy Moore, DA”, according to a copy of the yearbook page provided to reporters by her attorney, Gloria Allred.

About a week or two later, he allegedly offered to drive her home and instead drove to the back of the restaurant car park.

“I was terrified. He was also trying to pull my shirt off. I thought he was going to rape me,” she told reporters at a news conference on Monday.

“At some point he gave up and he then looked at me and he told me, ‘You’re just a child,’ and he said, ‘I am the district attorney of Etowah County. If you tell anyone about this, no one will believe you”, Mrs Nelson said, adding that her neck was bruised in the struggle.

“He finally allowed me to open the door and I either fell out or he pushed me out.”

But Senator Cory Gardner, the National Republican Senatorial Committee chairman, said on Monday he believes Mr Moore’s accusers “spoke with courage and truth” and the former Alabama chief justice should be expelled if he is elected.

“If he refuses to withdraw and wins, the Senate should vote to expel him, because he does not meet the ethical and moral requirements of the United States Senate,” he said.

“This is a witch hunt against a man who has had an impeccable career for over 30 years and has always been known as a man of high character,” he said.

Mr Moore’s wife also vehemently denies the allegations, contending that her husband’s accusers are being paid.

Mr McConnell told reporters in his home state of Kentucky on Monday that party officials have considered whether another Republican could challenge Mr Moore in next month’s election, through a so-called write-in challenge.

He said Luther Strange, whom Mr Moore beat in the Republican primary earlier this year, was a possible option. 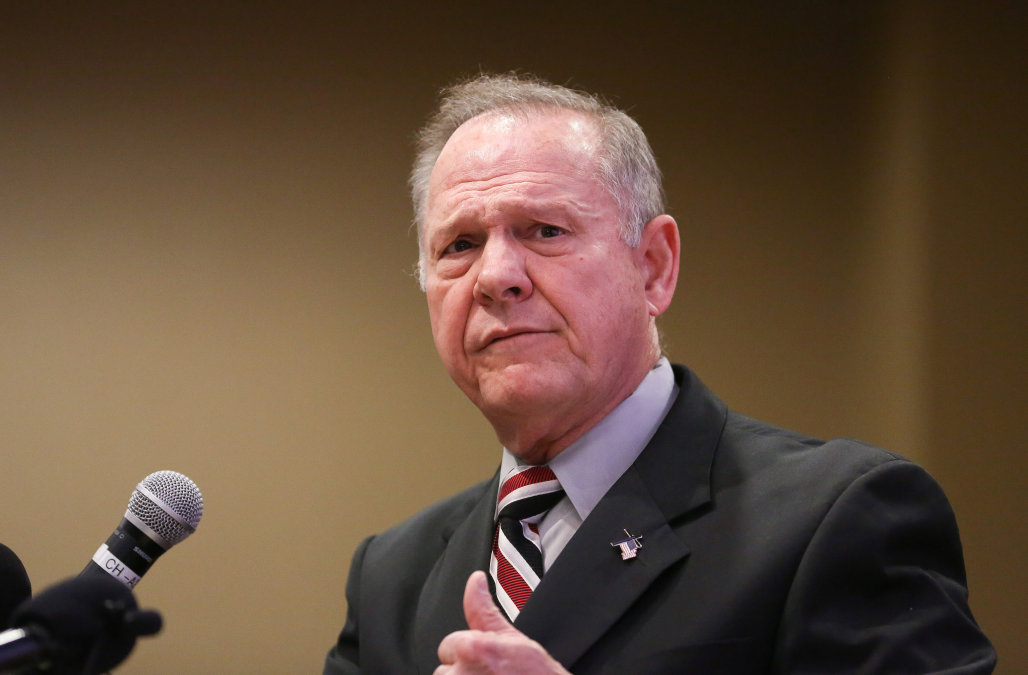