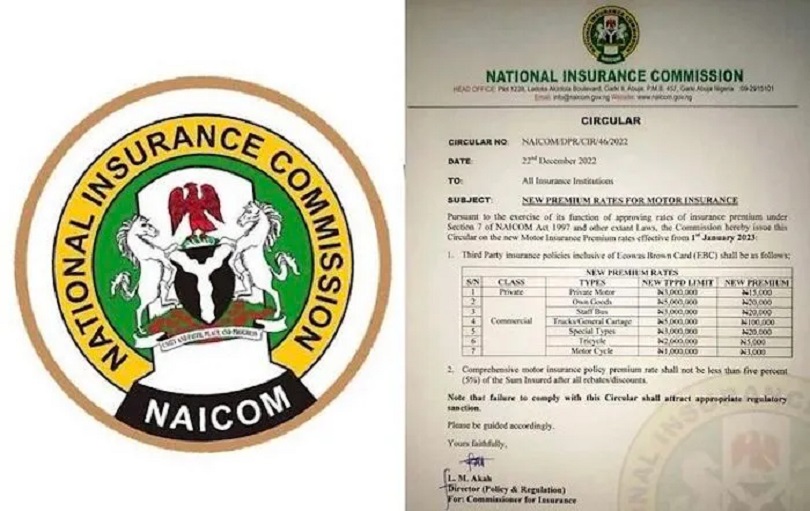 The Insurance Consumers Association of Nigeria (INSCAN), which includes motorists, has called on the National Insurance Commission (NAICOM) to reverse its directive on the increase of third-party motor insurance premium in Nigeria.

NAICOM recently issued a policy directive on the increase of third-party insurance policy in Nigeria by 200 per cent.

INSCAN, in a letter signed by its National Coordinator, Mr Yemi Soladoye, demanded the reversal of the directive, saying it amounted to a deliberate breach of the fundamental Principle of Utmost Good Faith and other decent regulatory principles guiding Insurance practice.

“We hereby write with respect to your Circular No.: NAICOM /DPR/CIR.46/2022 dated Dec. 22, 2022, increasing the third-party motor insurance premium in Nigeria by 200-400 per cent for different categories of motor vehicles.

“And by implication, giving only one week’s notice to the insuring public of Nigeria to comply.

“We demand the reversal of the directive as it amounts to a deliberate breach of the Fundamental Principle of Utmost Good Faith and other decent regulatory principles that guide insurance practice,” it said.

The INSCAN recalled that enough time was given to the public for feedback and adjustments to be made on the recent cases of currency redesign as well as the cash withdrawal limit introduced by the CBN.

It said the almost 20 million Motor Insurance Consumers in Nigeria deserved more than a week’s notice for compliance, describing the duration as a great insult to the collective intelligence of Nigerians.

The association said it had read over 500 public comments by Nigerians on the directive, saying the reputation slowly built for the Nigeria Insurance Industry was being eroded by the series of condemnations.

It said that practitioners, as well as the various arms of the central government of Nigeria, were being unfairly treated.

It quipped, “How much has your commission paid out to victims and customers of Proscribed Insurance Companies over the past 20 years as required under Section 78 of the Insurance Act 2003 to justify an astronomical increase in premium amount?

“Where is the report of an ad hoc committee required to be set up under Sec. 52 of the Insurance Act 2003, stating the imperative of increasing Insurance Premium by a whopping 200 per cent?

“We also know that the referred Sec. 52 of that Insurance Law does not confer arbitrary powers on you because Insurance is a business affected by Public Policy and otherwise it becomes legalised robbery,” it said.

The association said that the predictable outcome of the directive would be a substantial increase in the number of fake Insurance Underwriters in Nigeria.

You are definitely aware of the fact that even at the current N5,000 MTP Premium, many Nigerians still patronise the fake underwriters.

“And this is not because these Nigerians cannot afford the N5,000 but because they don’t see any benefit be it under your genuine or the fake cover,” the association said

It said that the directive would garner more money to the pockets of NAICOM and insurance operators and more hardship to Nigerian insurance consumers.

“To what extent have the interests of the Policyholders of the Insurance Underwriters, whose licences you revoked in the past year, been protected?

“How much have you paid to the various Fire Brigades in Nigeria as Fire Service Maintenance Fund as prescribed under Sec. 65 of the Insurance Act 2003.

“But still, you are quick to increase the Premium burden on the largely dissatisfied Insurance Customers in Nigeria,” it said.

INSCAN lamented the increment without due consideration for the feelings of the consumers, particularly in Nigeria, where the good customers who didn’t make claims are never rewarded.

The association said that failure to reverse the obnoxious directive would put NAICOM on record as the regulator with the highest level of impunity and insensitivity in Nigeria.

It stated that NAICOM’s policy directive was not subjected to civilised trade practices, professionally-accepted insurance principles, transparent customer-oriented regulations and humane attention to the economic situation of most Nigerians.

The association said that consumers were further convinced that the motive behind the directive was self-serving, arrogant and detrimental to their interests.

It said NAICOM was established to protect consumers, demanding a reversal of the policy pending proper consideration of the grey areas of the directive.