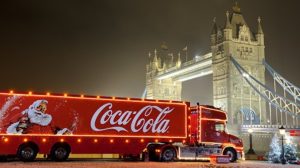 World’s largest beverage company, Coca-Cola, today announced that its Board of Directors has approved unanimously the recommendation of Chairman and Chief Executive Officer Muhtar Kent for an evolution of the company’s senior leadership structure.

Under the new structure, company veteran James Quincey, President and Chief Operating Officer, will succeed Kent as CEO, effective May 1, 2017.

Kent will continue as Chairman of the Board of Directors.

The Board intends to nominate Quincey to stand for election as a director at the 2017 Annual Shareowners Meeting in April.

“Managing The Coca-Cola Company to ensure our long-term growth requires a thoughtful and orderly succession planning process,” said Muhtar Kent. “I have been engaged with our Management Development Committee and the full Board on talent development and succession discussions throughout my tenure as CEO. We are certain that James Quincey is prepared for these new responsibilities and is the absolute right choice to lead our company and system into the future.

“One of our Board’s key priorities is developing the next generation of leaders and James is a perfect example of our talent pipeline in action,” added Kent. “Having worked closely with James during the past 10 years of his 20-year career with our company, I know that his vast industry knowledge, expertise with our brands, values and system, coupled with an acute understanding of evolving consumer tastes, make him the ideal candidate to effectively lead our company and bottling system. James has the strategic vision and inspirational leadership to usher in the next phase of growth for our great business.

“It has been the most wonderful and unique privilege to serve as Chairman and CEO of our great company over the past eight years,” Kent continued. “This transition comes at a time of important evolution for The Coca-Cola Company. Our journey to refocus on our core business model of building strong global brands, enhancing sustainable customer value and leading a strong, dedicated franchise system is well under way. During James’ time as President and COO, he has further demonstrated his deep understanding of the dynamics of our business and what it takes to win in the marketplace.”

Sam Nunn, Independent Lead Director of The Coca-Cola Company’s Board of Directors, said, “On behalf of the Board, we thank Muhtar for his outstanding leadership and dedication as the Chairman and CEO of The Coca-Cola Company. Muhtar has been a true visionary who led the company through sustained growth and set the stage for the tremendous opportunity that lies ahead. Muhtar has consistently put the next decade in front of the next quarter and laid a solid foundation for his successor and the shareowners. Among his many achievements, Muhtar has built a world-class leadership team and we are fortunate to have a leader with James’ capabilities as our next CEO.”

Nunn expressed the Board’s confidence in the appointment of Quincey: “James is a proven leader who is passionate about developing people, building strong teams and creating winning cultures everywhere he has been. He has the ideal combination of skills, ability and experience and we believe that there is no person more capable of leading The Coca-Cola Company.”

Warren Buffett, Chairman and Chief Executive Officer of Berkshire Hathaway Inc., said, “As Chairman and CEO, Muhtar has been an excellent steward of Coca-Cola’s business over the last eight years and I am thankful for the leadership he has provided to put in place the right vision, strategy and thoughtful succession plan for long-term success. I know James and like him, and believe the company has made a smart investment in its future with his selection.”

“I am truly honoured and humbled to lead this great company into the future,” said Quincey. “Muhtar has been a catalyst for change at The Coca-Cola Company – driving the transformation of our global bottling system, expanding our product portfolio and making sustainability a business imperative. I am committed to continuing my strong partnership with Muhtar, our talented management team and associates, and our valued bottling partners to continue this momentum and capture the enormous opportunities in front of us.”

Quincey, 51, was named The Coca-Cola Company’s President and Chief Operating Officer in August 2015. Earlier this year, he put in place a new international operating structure and leadership team to make the company more efficient and effective at the local levels, helping our operating units become faster and more agile. Throughout his career at Coca-Cola, Quincey has shown leadership in addressing consumer changes by expanding product offerings, introducing smaller package sizes, and most recently, driving systematic portfolio reformulation to reduce added sugar with over 200 initiatives in progress.

Prior to this role, Quincey served as President of The Coca-Cola Company’s Europe Group. Under his leadership, the Europe Group was the company’s most profitable operating group as it strategically expanded its brand portfolio and improved execution across the geography.

Quincey served as President of the Northwest Europe & Nordics Business Unit (NWEN) from 2008 to 2012. Among Quincey’s many accomplishments during this time was his leadership during the acquisition of innocent juice in 2009, which is now sold in more than 14 countries and is well on its way to becoming one of the company’s billion-dollar brands.

From 2005 to 2008, Quincey was President of the Mexico Division. During his tenure in Mexico, he grew market share for brand Coca-Cola and expanded the company’s portfolio with the relaunch of Coca-Cola Zero and the acquisition of Jugos de Valle, one of the company’s 20 brands that generates more than a billion dollars in annual revenues and is now sold in 16 countries.

Quincey joined The Coca-Cola Company in Atlanta in 1996 as Director, Learning Strategy for the Latin America Group, and went on to serve in a series of operational roles of increased responsibility in Latin America, leading to his appointment as President of the South Latin Division in 2003. During his time in South Latin, Quincey was instrumental in developing and executing a successful brand, pack, price and channel strategy, which has now been replicated in various forms throughout The Coca-Cola Company’s global system.

Prior to joining Coca-Cola, he was a Partner in strategy consulting at The Kalchas Group, a spin off from Bain & Company and McKinsey. Quincey, who is bilingual in English and Spanish, received a Bachelor’s degree in Electronic Engineering from the University of Liverpool.

“We are fortunate that Muhtar will continue as Chairman and James has agreed to run the business as President and CEO,” said Nunn. “The combination will ensure the continued success their partnership has brought to the company over the last 16 months.”