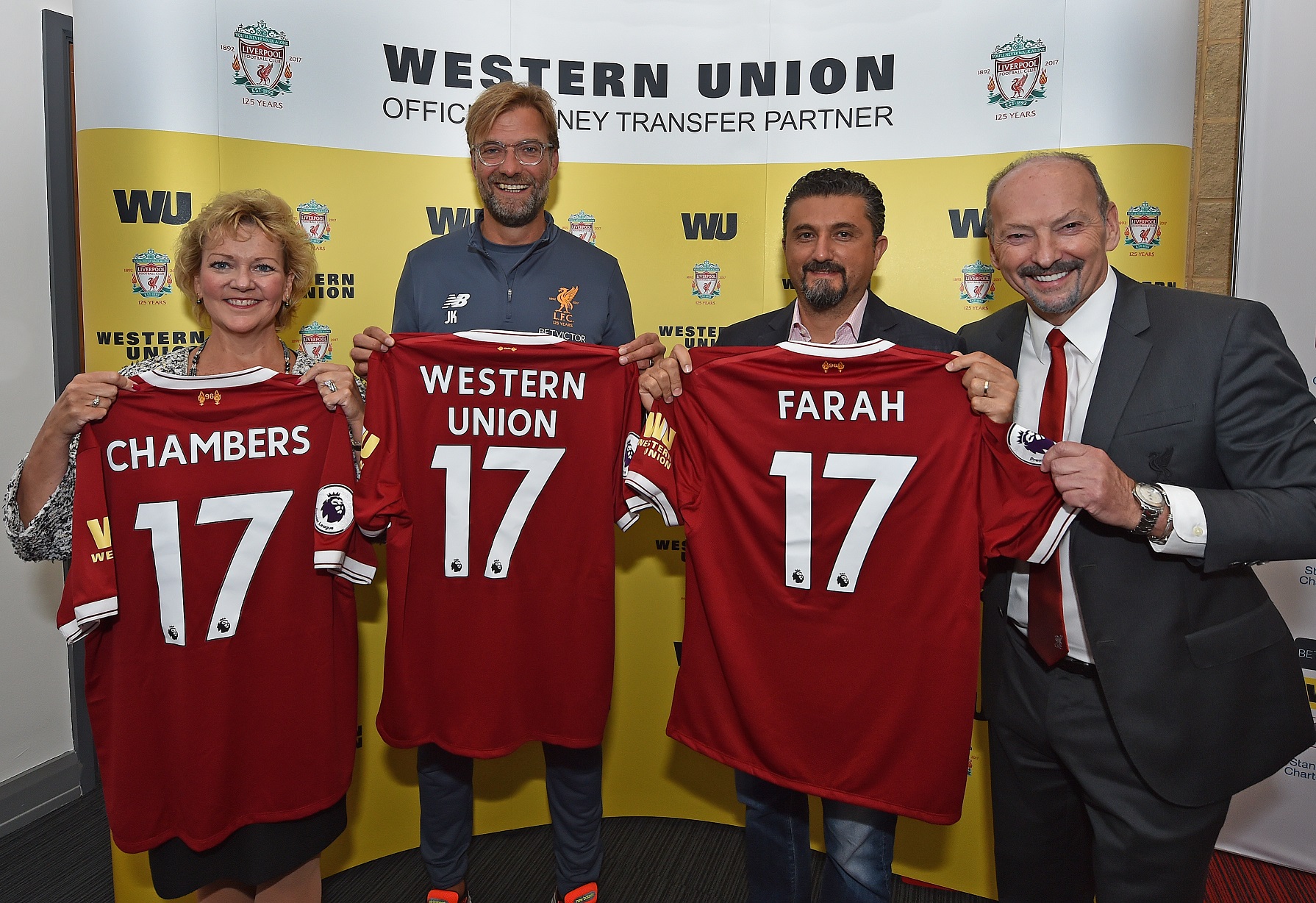 A multi-year partnership deal has been signed between Western Union Company and Liverpool FC of England.

The deal will see Western Union, a leader in global payment and money transfer services, become an official principal partner and the official money transfer partner of Liverpool FC.

As the official Money Transfer Partner of Liverpool FC, Western Union will use its global cross-border digital transfer and payments platform to provide money transfer capabilities to the club. Western Union will offer fast, easy digital payments and money transfers for Liverpool Football Club and its fans, linking them to their home communities or to virtually anywhere in the world.

“The businesses of Western Union and Liverpool FC are both driven by our passion for bringing communities together, whether that be through moving money or delivering the excitement of football experiences,” said Jean-Claude Farah, President of Global Payments at Western Union.

“This partnership goes far beyond a badge on a shirt, as we will be bringing our digital money transfer expertise to better connect Liverpool FC and fans around the world,” Farah added.

Billy Hogan, Chief Commercial Officer and Managing Director at Liverpool Football Club said: “Western Union is an instantly recognisable brand with a truly global footprint and we are absolutely delighted to welcome them as our first ever Shirt Sleeve Sponsor and official Principal Partner. We are very much looking forward to working with Western Union through this partnership to create new experiences and opportunities for our fans both in the UK and abroad.”

The two organizations mirror each other in their storied histories and truly global followings. Just as football powerfully transcends borders and brings people together, Western Union has a 160-year global brand history of connecting customers across more than 200 countries and territories. The 125-year-old Liverpool football club has more than 700 million active followers globally across television, social and traditional media.

“We are proud to celebrate a sport that unifies billions of people worldwide, and to work with a partner that so closely shares our values,” said Elizabeth G. Chambers, Chief Strategy, Product and Marketing Officer at Western Union. “Our customers are digitally-savvy and on-the-go, moving not just money but their human capital – their cultures, values and sporting allegiances. Like us, Liverpool FC has an active and diverse global following who want to be a part of something bigger and we can help them achieve this.”

Western Union continues to drive its ambitious digital expansion in countries across the world, and will harness its deep cross-border and fintech capabilities to improve the payments experience for the club as well as LFC fans, suppliers and business partners. Whether close to home or far afield, they can look to Western Union to help move money when, how and where they need it.

The partnership will see Western Union benefit from a diverse range of LFC marketing and promotional rights, including digital and social media support, pitch side LED messaging, and branding across Anfield stadium, its fan lounge and the Club’s media channels.

To celebrate the launch of the partnership, Western Union will be offering Liverpool FC fans in the UK, Ireland, France, Denmark, Norway and Sweden a fee-free* money transfer promotion, running from August 10 through until the end of August.

The Western Union patch will be available free of charge to all LFC fans that have purchased a 2017-18 Liverpool FC shirt and will be available in-store and online from Sunday 27th August. Full details will follow on www.liverpoolfc.com.