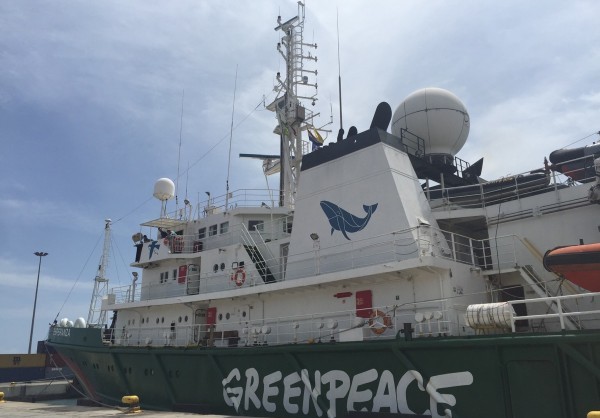 The Greenpeace ship called My Esperanza on Friday docked at the port of Praia in Cape Verde.

For 11 weeks, the Esperanza will sail the waters of six West Africa States – Cape Verde, Mauritania, Guinea Bissau, Guinea, Sierra Leone and Senegal to raise awareness on the state of fisheries through political events, public engagement and consultations with the West-African science community.

The ship tour named “The West Africa tour of hope” will provide an opportunity to make these countries’ voice on protecting their own sea and marine resources heard internationally.

“By bringing the ship to West Africa, Greenpeace seeks once again to reiterate its ultimate commitment in working with local communities and governments in addressing issues of overfishing and illegal fishing that have plagued the region for decades” said Greenpeace Africa Executive Director Njeri Kabeberi

The West African waters are among the richest in the world. Millions of people and local communities depend on them to survive.

However, the population in West Africa is growing and the fish stocks are declining as a result of fishing, climate change, pollution and destruction of critical habitats.

This situation is exacerbated by the lack of efficient fisheries management in the region, illegal, unregulated and undeclared fishing activities (IUU fishing) and the weakness of surveillance systems in most of the countries.

“Overfishing and illegal fishing in West African waters is a threat to food security, fish stocks and a healthy ocean. It is critical that the collaboration between states be reinforced to support a regional approach to better management of fisheries in West Africa”, said Ibrahima Cissé, Greenpeace Africa Senior Oceans Campaign Manager.

In the last 15 years, Greenpeace has documented and exposed how distant water fleets and illegal vessels have moved their fleets to West Africa after overexploiting fish stocks in their own waters.

Chinese, Russian and European fleets are among the most prominent in West Africa waters. Their activities have and continue to compromise the food security and livelihoods of coastal communities who largely depend on artisanal fishing.

More recently, the rapid growth of artisanal and industrial fishery without regulation or planning of their capacity has added to the problem.

“West Africa States will have to work together and act with a unified voice to safeguard their waters. A sustainable common management of resources, especially the small pelagic is a first step to guarantee fish stock for present and future generations” added Dr Cissé.

In the next two months, the Greenpeace vessel My Esperanza will work closely with local authorities to increase the sense of urgency required to deal with the current unsustainable approach to fisheries management and call for a strong Regional fisheries management system.